The goldfish are in!

😓 Firstly, we are making progress with challenging the proposed gun club. I remember your battle on Turkey Mountain, Yogi, trying to fight a ridiculous development.

There is some momentum. A poster had been made (see below). There is a network. A local resident submitted a Letter to the Editor! The local lake association is getting involved, too. They hear the guns firing 2 km away.

The Notice of Public Meeting was snuck by us, but word of mouth is great in a small township (pop. 8183).  Three of us worked on a presentation for next week at the council meeting. My daughter, JB and myself – between us we have 6 degrees, and are used to writing reports for business purposes. We've all delivered our fair share of reports. JB testified in a Senate Transportation Committee hearing on parliament his last week of work prior to retirement. I was union president in my time. 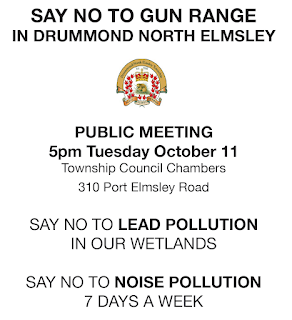 👔 JB went off to Smiths Falls to pick up his dry cleaning. While there, he noticed he had a flat tire. He was near Canadian Tire, and had it replaced. What a pain. It was a roofing nail. He left me a message, which I picked up in between running goldfish into the house.

😷 Speaking of family, thank you for your kind words about Josephine. She didn't barf last night, this is a good sign. She's been sleeping in until noon, which is good for a sick young lady.

🐟 My big news... it only took me one day to get all the goldfish. Not only that, but it appears we have rain on the way to refill the water barrel and the fish pond.
The pond pump is away, having cleaned it thoroughly. 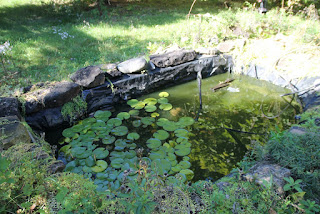 I drained it, which took hours, and found most of our goldy friends. I did find one dead, which was sad. It appears we have had babies, though. The water lilies are a bit exposed, and I'd like to refill it some. 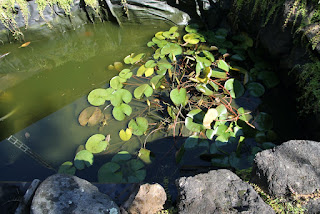 Percy goldfish has grown some! 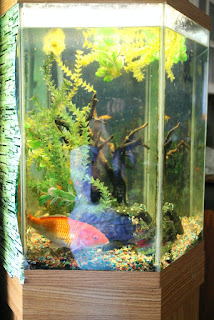 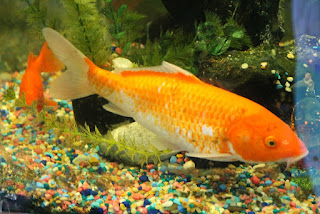 It's tricky taking a photo of them. Here are the hybrids: the goldfish mate with the ale wives in the pond. They have black fins. Sadly Ale Wives don't fare well in the warm goldfish aquarium. 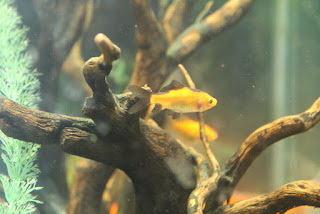 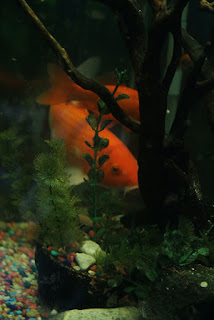 The big question: how many did I find? I think 8, but I was so excited running with them to the indoors from outdoors, that I neglected to keep track. They are difficult to count! 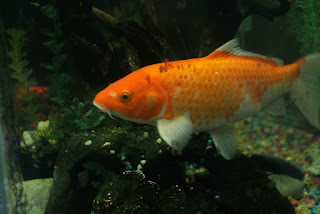 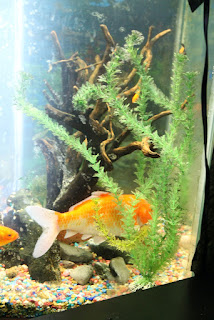 I captured all our goldfish from the outdoor pond and brought them in to put them in the 60 gallon tank. The side of the tank is 35 cm/14" wide, he's a big boy.

Bringing in the goldfish -- the true start to fall!
That big one, WOW.

You wonder what they think of the whole experience.

I'm glad that if JB had to get a flat, he got it when he was near to Canadian Tire! That's convenient and sure beats a country road! Good luck with the shooting range. I'd hate that if near to me.

...I hope that you are successful.

Sure sending powers to you all virtually...get the gun range out of your area! Love seeing the happy warm goldfish. I remember hearing that they create some acid or something environment so tropicals can't be in the same tank with them. Never had Alewives. So glad the flat was found in just the right neighborhood!

Percy is a very big boy.

Great news with the range opposition meeting. Goldfish, at our other home we didn't need to bring them in, and I did hear if it got ice, not to smash the ice as the sound waves could be dangerous to them ??? Need some research for this I guess. JB, good timing for the tyre repair.

I hope you are successful in your campaign against the gun range. Good work at bringing the goldfish in. Percy is a handsome fellow.

I really, really hope you can stop the gun club. Congratulations on finishing that difficult job with the goldfish too.

Hello Jenn :=)
Well done getting the Goldfish inside, not an easy task. Your tank is ideal for them, and good luck with the ban on the gun range.

Sending best wishes for sanity to prevail among the decision makers at the hearing. Am sure your well presented testimony will help. .... my gosh that goldfish grew. Is there a the difference between goldfish and koi? That one looks like the fish I've seen in what they call koi ponds in different places.

You go on the fighting the gun range thing!! You can fight city hall and it sounds like you folks have the skill set to do it. I love it.

Hari OM
Oh my, be still this beating heart; Percy is a stunner!!!

That is a good job well done :)

That was a big project with the gold fish:)

I'm impressed with the goldfish and the management process for them. I've never known anyone who got babies from their goldfish, and I find that exciting!

Good luck putting a stop to the gun range. It'll definitely hurt the peace in the area if that noise is allowed to intrude. These days, though, guns seem to rule :(