Our eavestrough was in sad shape. It looked pretty bad. The house dates back to about 1985-ish. We had new shingles put on awhile back. Someone had painted the eaves twice, over the base coat of dark brown. Now it is all flaking. Painting eavestrough doesn't work with Ontario's freeze/thaw temperatures. 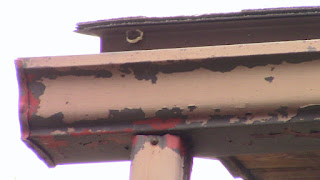 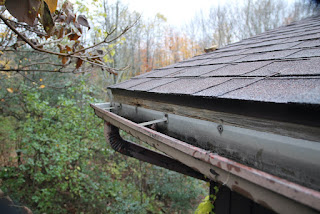 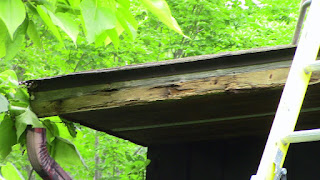 Oct. 2020 – I had to repair the downspout, during a pandemic. It was a common problem when we got big dumps of rain. We had 🎥55 mm one day one year! 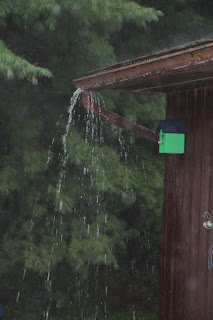 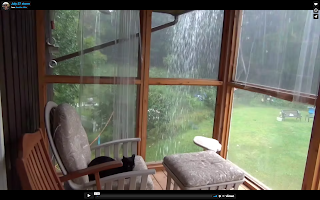 What has been happening in the big storms is the eavestrough has pulled away from the fascia, and the water has been running in under the roof, and dripping in the Muskoka Room. This is not good.

We decided to get some quotes. We phoned a couple of companies, and didn't hear back. Finally, one company returned us a quote, but didn't specify that they would remove the old eaves, nor did they actually inspect the house. Company #1 quoted us on 154', based on viewing the house via Google or something. Thing is, we don't have eavestrough on either end of the house.

Looking at the companies online, they only seem to offer the really expensive stuff with the gutter guards. That just won't work with the heavy storms we get. It overflows as it is. Plus, they are very expensive.
Company #2 – we haven't heard from. It's been a week.
Friday, April 28th
Company #3 – referred to us from our local Facebook group, don't seem to offer anything but the ones with gutter guards. He finally phoned and will visit Monday or Tuesday.
Company #4 – I ended up registering online for Rona. They can give me an estimate, and someone to install it. It's not a complicated job! They emailed in response Fri., April 29th, saying they would be back in touch within two business days. It's Tuesday, May 3rd, so far nothing.

May 2nd
Company #3 – He visited May 2nd, it was raining at his job site and he'd stopped work. He will give us a quote. He is booked until July. He won't replace the fascia. He's been doing this since 1974!
May 3rd – JB visited the place in town, Company #2, Above the Rest, and they said they do fascia. No quote yet, though.
May 4 – Company #3: estimate from Dobbie, no removal of the old stuff, or replacing fascia. He was booked for weeks.
May 6 – Company #4: Rona, in Carleton Place. Their confirmation email says they will get back to me in 2 working days! I contacted them online 7 days ago. Nada.
Company #2, Above the Rest, visited Friday at 4:30. They measured 146'. The owner came, and took all our notes about the house, the colour of the new stuff, vinyl or aluminum.
May 18th  – Company #2, Above the Rest, gave us a quote. It was competitive pricing.
– Coincidentally, Rona emailed. It could be several weeks before they can send someone to measure for a quote. Also, they charge $85 for a quote. They don't need our business!
June 17th – a phone message from Above the Rest, can they come Saturday, June 18th?
June 18th – It was the day. I saw a man walk by the house at 9 a.m., wearing a warm hoodie, looking up at the eaves. It was a cold morning, but we were in business.
We had our lights flicker, there were quite a few people without power from the winds that ripped through the province. We were happy to keep out power, as they needed it for their tools. 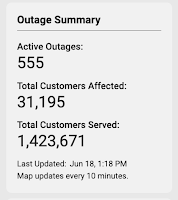 They began in the front, and there was much action. The 'Red Ripper' ripped it off the fascia, which was fine, BTW. 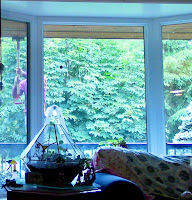 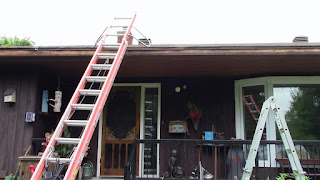 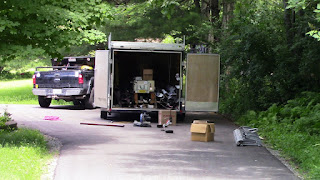 The cats were not impressed. Cinnamon first went downstairs. Nutmeg stood looking through the front door at the strangers standing there. She moved to the cat tower. Then, when the crew moved to the backyard, ladders and all, Cinn perched himself on the second from the top step leading down to the basement.
Nutmeg disappeared. This is why! The Red Ripper was working on the roof. It's quite the tool.

By 2:30 they were done, my plants hanging back in place. I'll have to wash down the railings, again, non-mental note. The cats had calmed down and had a bite to eat. We have a new bill to pay, but it is a relief to get this done! 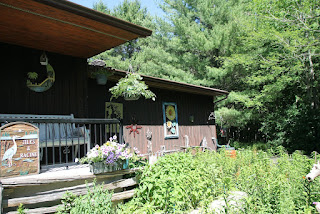 There were issues. It leaked on the back deck. They came and fixed that. Then there is the front. We've still issues with the new eavestrough. It sags in the middle, right over the door. I've emailed them with videos. 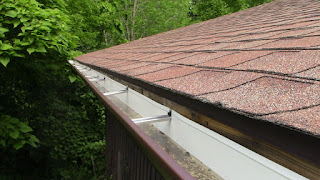 eavestrough from Jennifer Jilks on Vimeo.

eavestrough 2.0 from Jennifer Jilks on Vimeo.

eavestrough 3.0 from Jennifer Jilks on Vimeo.

eavestrough 3.1 from Jennifer Jilks on Vimeo.

They came and fixed the eavestrough, again. (I'd sent a video.) They seemed grumpy, dropping the F* bomb on top of our eaves as they undid screws and changed the level of the eaves. Left without saying they were done. They warned me of the debris in the gutter, but it wasn't much truthfully. The angle of the trough needs to go from the high point to this, the drain point over the downspout. 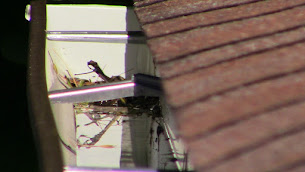 This is the fascia I thought they should have replaced. They told me they hadn't needed to during the original installation. We shall have to see what the next big dump of rain brings. 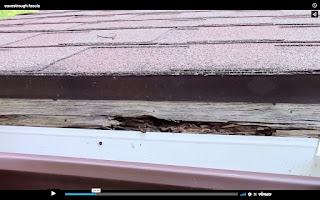 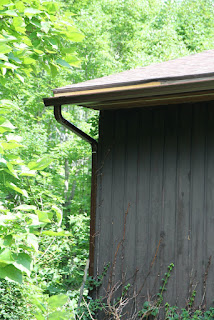 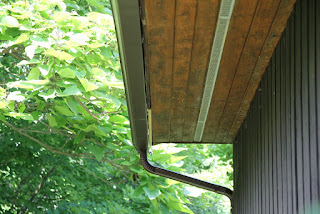 I think they are as irritated with this job as we are. They turned up, didn't ring the doorbell. They worked. They left. No face-to-face contact at all. We'll need a storm to let us know if it works. I am glad they came back. It's been such a trial.
Posted by Jenn Jilks at 06:59

...I hear pros and cons about gutter guards.

Recently, getting any repairs done to houses has been a real ordeal! Interesting to learn it's not just here south of the border. (Not counting the nearby border between Detroit and Windsor that goes the other direction.)

As they say: 'All's well that ends well'
I can understand and sympatize with you. I live under the roof in an old building, and have trouble with water leaking on the walls. Fixing the roof(not shingles) is expensive, and has to be done every several years.

Hari OM
It's unbelievable how hard it is to get decent trades work done - I have to face this sort of thing (ceiling repairs) when the cash comes through but finding anyone in the first place and then one with whom one feels confidence... sigh... glad you got this work out of the way. Congrats! YAM xx

Now that was some project. Have a great week.

It's hard to get any house work done now. Glad your story had a happy ending.

Great successful story of home ownership, and stewardship! Glad the cats coped too!

What an ordeal. We had to replace a washer/dryer that should have been simple but with a small space the options were limited. They no longer make the traditional stacking units in the small size that fits our closet. We had to get small front load machines with weird washing and drying procedures. Good thing we don't have to wash too much when we are in the States. - Margy

We are close to having similar issues. Our house is 1992 vintage and we don't have enough downspouts and the guttering sags in the middle of long runs. I dread dealing with contractors.

It bugs me so much when they don't even answer the phone or return a call -- and all the more when they skip an appointment without notice. I need something with a leaf guard but the gutter guy told me with the kinds of leaves I have (very small) it would be a pointless expense. An honest gutter guy.

Glad you finally got it done! We have a steel roof so we don't have gutters! :)

Aaarrgh. This is so familiar. From the difficulties in getting quotes, to the failure to interact with the customer (who once upon a time was always right).
I am so glad that you finally got the work done. And quickly too. When we had our gutters and downpipes replaced it took over a week. And the cat was NOT happy.

Looks fabulous, never mind the cost, no more getting up ladders and repairs. So glad it was done with power on all the time and the cats have recovered.

Jenn we didn't suffer as much as you did with quotes and work to be done (great job keeping track of it all BTW !) we had our gutters done last year and a new roof this year .. our house was built in 1989 I think .. so things need work .. although we did have the roof done about 20 years ago .. but now ? I think we will be gone by the time it needs a new one ? LOL .. son can sort that out.
Our kitties were not impressed with the noise either ... cats really hate out of the ordinary noise for sure .. glad you kept your power on !!
Take care

Just ordered four new outside doors from Verdun Windows and Doors. It will be a nine month waiting time for them. I'll have to chink my drafty old doors for one more winter. (sigh)

Just ordered four new outside doors from Verdun Windows and Doors. It will be a nine month waiting time for them. I'll have to chink my drafty old doors for one more winter. (sigh)

Hi, from Idaho and stopping by from Yogi. Our list keeps growing for home repairs to do when I retire, hubby already retired. But our roof and eaves are in good shape.
If you have time stop in for a cup of coffee.

Congratulations. It is a lot of work caring for a home

I can see that driving the cats up the wall.

You have NO idea how much I have missed visiting you. That water overflow you showed looks like my down spouts. It was great that you got someone with a decent rate who would actually do the job. I've NEVER heard of anyone requiring money for a quote when they really want your business. You were right. You didn't need that company.

Why do fairly simple projects turn out to be so complicated.

It is a real adventure getting anything done on a house these days. Ours was complicated by the fact that our house is over 150 years old and a very tall 2 story brick building. New evestrough and fascia did get done but it was a real ordeal and cost quite a bit too.

Hello from Australia, coming in via peppylady (Dora). Eavestroughs are called gutters here and gutterguards are highly recommended, they don't stop the water flowing but DO stop leaves and twigs etc from falling into the gutters and causing a blockage. I think our gutters are galvanised steel in Australia, there are probably cheaper ones in aluminium. Always powder-coated during construction and you can choose from a range of colours.

We really don't need gutter guards, River! The winds blow stuff off the roof out back. I just have to clean out the front corner from time-to-time. We don't get the leaves in them. If we had gutter guards, the water would just flow right over, defeating the purpose.

Congratulations on finally getting the work down. It sounds like it was quite the ordeal!