Have you had your flu shot?

💉It can't hurt. Well, only a bit of a poke! People are visiting one another more, and they suspect there will be some flu this year. Last year we had precious little. Flu shots are free in Canada. Some flu years are worse than others. [Influenza H1N1 is bad this winter: 2013/2014]

Firstly, I signed up for the Shoppers Drug Mart notifications. I'd signed up for a text alert for the COVID vax, so I thought this would work. An email arrived, the first wave were being vaxxed. The first wave consists of people over 65, as well as those with health issues, or caregivers: Check if you are eligible.

You'll note that the email, if you hover over it, says: "No appointment needed". 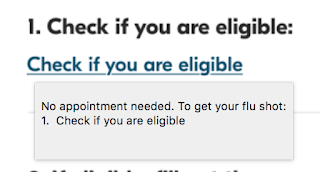 OK, I sent the email to JB and he agreed we were eligible. Me as caregiver (I'm not 65 until December!), him, as he's over 65. There was an online application, which JB did for us. Plugging in OHIP card numbers, for both of us, it then led to a screen for somesuch, and an application. It was onerous. He filled in the application online. (Remember this!)

So, when to go in? Probably sooner rather than later. Now there are all sorts of barriers to the store having a successful vaccine session. They need extra staff, they need the vaccine on hand, they need to control the people who appear. I wondered if JB should go in, he had a Rx to pick up, just to suss it all out.

I suggested we go in and get them, as they may run out. I was planning on bringing in goldfish on Thursday, but this needed to be done. (I did bring them in later that day: Bringing in the goldfish.) There are many who complained last year, including Perth's Dr. Drummond, who was sent 600 flu shots for 1500 patients. It appears to be the same this year. There is some sort of deal with the big box store, that leaves out the smaller stores and physicians.

I got dressed, and put on my face. (Selfie, you see!) It turns out they are doing appointments, and not doing walk-ins. She gave us an appointment for Saturday morning at 8:35. What a pain. I was so angry, and vented to poor JB. I looked good doing the goldfish!

Saturday, I woke up at 3:30, and didn't get back to sleep. We'd gone to be so early, I didn't want to take my sleeping meds until later. Whoopsie! I listened to a couple of radio broadcasts, including an Aussie ABC show on poisonous snakes and preventing snake bites (7 min. audio), by expert Dr. Christina Zdenek. It was quite the show. We don't have poisonous snakes here, except near Georgian Bay, where they have rattlesnakes. So it wasn't a worry for me!

By 5 a.m., I figured I'd get up. I puttered and wrote my blog post. We doddled through the morning until our 8:15 departure for our 8:35 appointment.

The time came, pouring rain, thunder and lightning to the north of us! I took an umbrella, but wore a dress. I figured I'd go in, come home and just hang it up to dry. 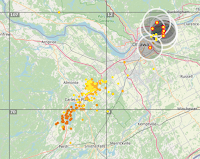 Dawn is getting later. For now it was a bit peculiar, but the clouds were pretty dark. You can see the dark line of clouds. 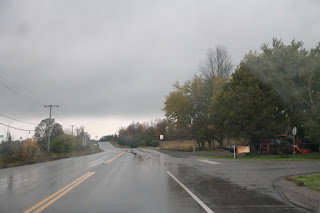 This was a bit worrisome. And only got worse! 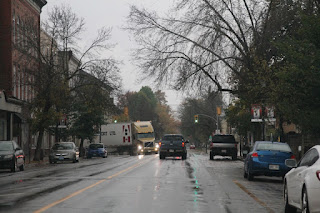 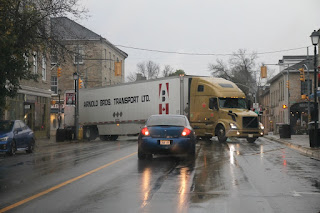 Remember the online form to fill? We had to do it on paper at the store. 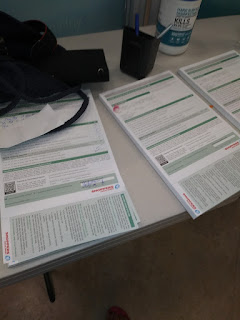 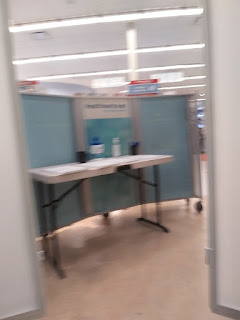 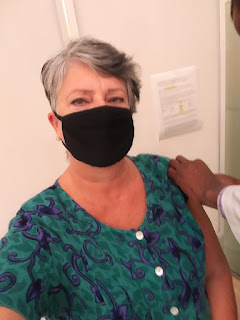 I hadn't had breakfast, I'm nervous enough. JB offered to get me a brekkie sandwich. I sat and cooled my jets. Flip flops were good in the pouring rain. 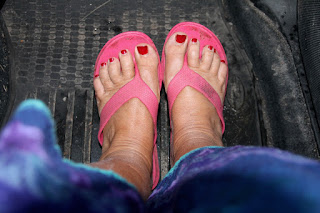 Here he comes! My hero, in the pouring rain! 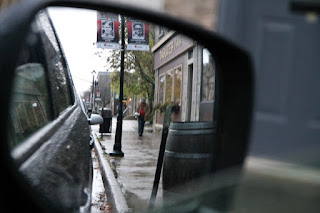 It was a dark and stormy day! 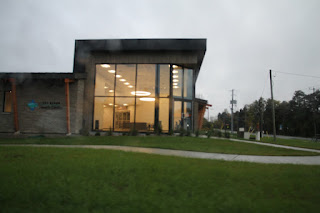 Geese were flying. Soon they will gone, for the most part. 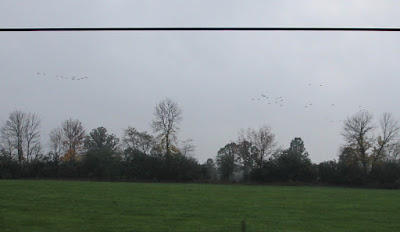 I used to love seeing them at the lake. 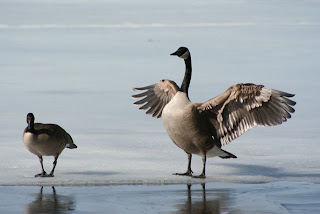 We had a solid amount of rain, 13 mm. The goldfish pond is full. There were zero frogs when I emptied it. Then there were three! 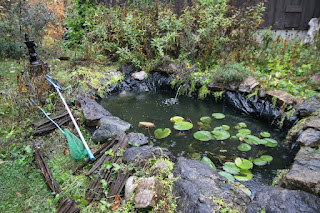 Back at home I was worried about the white goldfish. They don't know why they turn white, but they do. She was not looking good and I nearly put her out of her misery. (Canada has medical aid in dying – MAiD!) By Saturday, her tail was bent and curved, she had trouble swimming. Saturday afternoon she was upside down. By the evening she was looking a bit better. Sunday morning, she was feeding, her tail looked better, and we have had a miracle, or at least a few days grace. 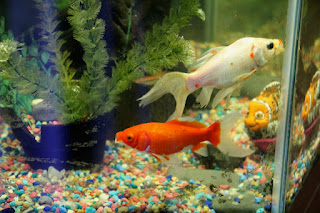 "The pharmacy will be reimbursed $5.00 for each dose of publicly funded influenza vaccine administered through health care agency-administered pharmacy clinics."

Hari OM
I don't know many who could make such an entertaining post out of going for a shot in the arm!

Maybe "Whitey" was just acclimating to the new swimtry - I hope so and that it continues to improve. YAM xx

Glad you got it wishing you all the best!

Even the bears know to queue in line properly. What a story, it all sounds so exciting for a routine shot. Down here, I had my Flu shot earlier, had to wait at least 3 weeks for the first Covid, that had to be delayed, and last Thursday had my second Covid. But do I feel really safe? NO. Last week there was a rally at an Auckland Domain, 2000 people together, the organiser has been prosecuted, as that area is in a level which states, no more than 10 people together outdoors, and they must be from only 2 households. SO the positive cases increase.Your hero? I have one too, he makes my coffee at home.

I know 2 people who went early in the day for flu shots without an appointment but when I went to the same store I needed an appointment. Went back 2 days later and got the shot.

In such a weather, I immediately get the flu, with or without vaccine.

Sometimes things can be very frustrating. We were lucky and got in as walk ins before appointments started.

I imagine I'll get the flu shot soon enough.

We've had flu shots for years. Expect to get a call from the pharmacy here any day.

I got my flu shot a little over a month ago. No appointment needed.

Hello Jennifer,
What a story about the vaccines.
You show nice pictures. But terrible to see is the almost collision with that truck. Luckily it went well.
Nice picture of that goose.

I saw at the grocery store that I could scan a QR code right then and there to begin the process. I didn't because Sue and I should do it together. Hopefully, the doctor will call. It seems simpler that way. She injected us in the parking lot last year.