Drunk and disorderly in Perth

Unlike our MPP's sons, we've been in our bubble. The whole Hiller family, including his daughter (@chillie2), are avid anti-maskers and COVID-deniers. Two men were arrested for drunk and disorderly in a Perth bar. OPP didn't ID them. Hiller did.

There was a video of the incident on Facebook. The video shows several individuals yelling and swearing loudly at police. One individual appears to square up in front of an officer. Moments later, he is tasered. 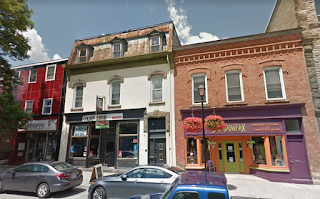 “As they attempted to de-escalate the situation, my eldest son, Dillon, a Canadian Forces veteran, was thrown to the sidewalk by the police, at which time my youngest son, Clayton, stepped into the unoccupied space between the police and Dillon to act as a shield to prevent further physical violence against Dillon by the police.” 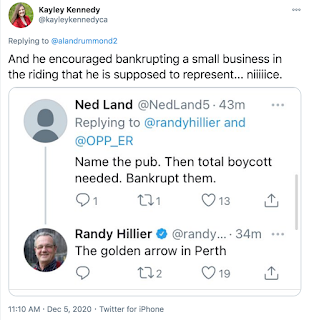 Hiller was fined for leading an anti-mask protest in Toronto. (If found guilty, the penalty for the protest during a lockdown ranges from a minimum $10,000 fine up to a maximum of $100,000 and a year in jail.) 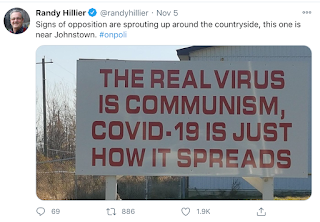 We elected this lunatic, but I ma happy to say, he never got my vote.

...so you have idiots north of the border too!

This guy is a complete nut case. It's almost impossible to deal with the irrational.

I live in the US. Our cases have more than tripled in the last week. In my country, 1 in 22 have had or have covid. In the state of North Dakota, one in every 800 people have died of covid.

And still we have deniers.

We know who this brain-dead moron would support if he lived south of the border.

Oh no... You have those idiots too! I had so hoped Canadians were all smarter than us.

There seem to be more and more of these unthinking and uncaring people around, here in BC, too. It makes me angry.