Loon on the frozen field – missed the 'go south' memo

I don't know why I volunteer to do these things. We had some time. My regular Thursday morning volunteer gig was cancelled, tutoring teen girls. I totally forgot, in the emergency, that I was to participate in a Webinar on Dementia for my volunteer work. People needed to have a rescued loon delivered from Perth to Napanee, and they had to get it back into water within 24 hours. Napanee has a wild bird centre. I thought I could do it.

There were mistakes.
Plan A
Firstly, they told me it had to go to the Wild Bird Centre in Napanee. I checked with hubby. It's only a 90 minute drive, and the sun was out. Sure.
Then, when I made the phone call to the Nepean centre in Ottawa, they said it had to go to Nepean. No worries. That's only an hour away.
Plan B
I asked the Nepean Wild Bird Centre if there was anything I needed to know. Did I need to wear gloves, as was suggested by the rescuers?  It's not good to get human and/or foreign goop on their feathers. The person answering the phone told me no. No special instructions. She gave me their address, and I wrote it down. We'd often driven that way to visit the kids.

The rescuers said they would put it in a box, since it could get its neck stuck in a dog crate's bars. They didn't have a box, but it was sitting in a dog crate. We had a cat crate, and that wouldn't be a problem. I put towels in the bottom. When we arrived to pick it up, they corrected us. Not going to  Nepean. No nice lunch in the city. We were off to Napanee. Sure. Change back to Plan A.

It was unable to fly. It's rear legs appeared frozen.  The wings were damaged. The brave man who had caught Chompy (in his shirt sleeves, in a frozen farmer's field, using his coat to capture it), was called back the office. It was sitting quietly in a dog crate, and he began to load it up for me. He grabbed its neck with his gloved hand, it grabbed his coat sleeve with its large beak, and he lifted it up and popped it into our crate.

Along we drove on centre bare highway, with storm clouds looming from Lake Effect Snow. After 20 minutes Chompy seemed rather upset. We were miles from anywhere. It seemed as if Chompy had thawed out and was good to go. My instinct was to stop at an open river, there were a few on the way, but not many, and throw it in. They need open water to run fast enough to become air borne, the lakes are mostly frozen over. But what is it WAS injured?


Eventually, it calmed down. During another pit stop I was afraid to look. I regretted our decision to volunteer. When we arrived in Napanee, a staff member picked the crate up and took it into the back room. She said that she needed to know where it was found, and that we should return it to the open water. We had to stop twice for pit stops. It was a terrible drive. It was happy in the enclosure. What was I thinking to put hubby through this? He adores animals of all kinds.

The staff member called in her supervisor, who inspected the bird in the private back room. She came back out to lecture me, telling me that I should not have used the crate. Chompy had smucked her beak and wing on the bars trying to get out. Lesson learned. I was just trying to help. The boss was terribly harsh. Yes, it had blood on its beak from trying to escape.
No, I didn't mean for this to happen, but how could this have been prevented? It just shows me that we shouldn't interfere in wild life. We rescue so many wild things, hopefully take them to registered wild animal sanctuaries (it's illegal to keep them otherwise), but are we doing them a favour?

Someone with knowledge and education could have told the people who captured it to bring it to some open water after checking on its condition before we spent three hours on the highway.
Or, on finding it seemed OK after it thawed, taking it to the nearest open water, which is where the Centre said it had to go back to eventually. I'm not so sure. It's supposed to fly south across hundreds of miles, surely it could find its way south? There was no way we were making that drive back. Why didn't someone tell someone? Why didn't someone, with information and authority, tell me what to do properly before we left the house? I asked.

Why did they let me use my time, gas, and energy, only to chew me out upon arrival?
This is not how to treat a volunteer. I am angry and frustrated. I feel badly for Chompy, but I made the right decisions at the time with the information I had been given.

Let them use their anger on those who abuse animals, seniors and children. This bird could have frozen to death in the field, or been eaten by the wolf or coyotes. That would have been nature. The people who run these non-profits need to read the recent literature on how to treat volunteers. We retired volunteers and shadow boomers (at 43% of the population) carry the weight of many programs. My hubby has had worse injuries trying to get our rescue cat, Mitzi, into this crate to take her to the vet. Abused by one family's dog, she had huge mental issues. She eventually died of aspiration pneumonia, but after some good years with us. R.I.P. dear Mitzie. Hubby had to go to the doctor to get a tetanus shot.
The things we do for animals! 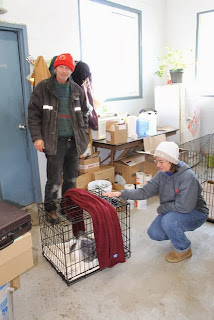 There is nothing more haunting than the sound of a loon.

Loon on Otty Lake, Lanark County from Jennifer Jilks on Vimeo.
Posted by Jenn Jilks at 09:19

Thank you, thank you for caring.

A friend of mine who lives around the corner from my old place encounters the same treatment. She volunteers for the city of Mississauga and has rescued countless animals under dangerous circumstances. She's been injured by frightened creatures a few times and so often gets that kind of runaround It's frustrating as hell.

We rescued geese from our local pond when there was an oil spill. http://thesmittenimage.blogspot.ca/2010/03/when-you-defile.html
I know how harrowing it is to drive with a panicked bird in the car. Sadly ours died en route but we tried. And you did the right thing for this poor loon. Thank you for caring.

You are kind, Hilary. I am feeling better. Hubby, too.
These are comforting words. Yep, shoulda chucked Chompy back into a river somewhere! sigh.

I'm sorry to hear both you and Chompy had such a difficult time. You are right, volunteers are so important to many organizations. Plus, I know you would have done anything they asked if they had been clear about what should have been done during the first phone conversation. - Margy

so what happened to Chompy? Did he find open water? Sorry to hear about the terrible experience.

Wow, what a time. And you were trying to help. Volunteers should be given all the info they need to help. You are a caring person. I hope the Loon was OK.

Good grief! You guys are angels to go through so much trouble to do this. You should write or call and let them know what happened and how you feel.

People are strange Jen, we do what we feel is right. I heard about a loon in the Tay at the park this week and I'm wondering if this is the same one. Well done you!

Hari OM
So sorry to read this Jenn. I truly do think you did the best you could at the time.

Am not clear as to whether this is a structured rescue program you volunteer for... in OZ we have a volunteer organisation called WIRES which actually trains its 'outworkers' and almost every street in the country (certainly every suburb!) has one or two of these 'paravets' with the sort of expertise and advice you didn't get. Most often they will come to the notifier and take the creature involved or, if remote, give full instruction on cares. I have had nothing but positive experience of this.

But you certainly did the best with what you had. What a beautiful bird. Hugs, YAM xx