The second 🥀amaryllis bulb is in flower. I couldn't pick just one photo. They were begun in December. Which do photo you prefer?! My clever photography peeps could make it perfect. I read up on it, and snipped the dead flowers off of the other bulb, and popped it in the fridge. It's supposed to be there 8 - 12 weeks. I wrote it on the calendar! 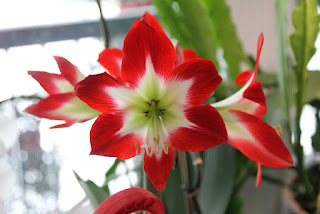 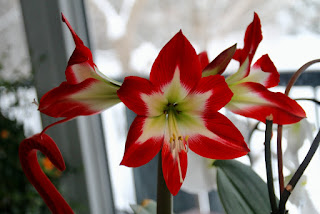 The polar bear has been outside for the holiday season, beginning in November. 🧸Snuggle bears welcomed him back in. They've been hibernating, but decided to see what was what. 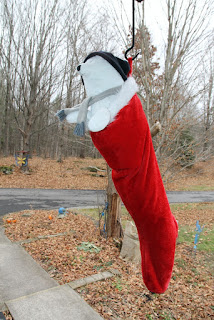 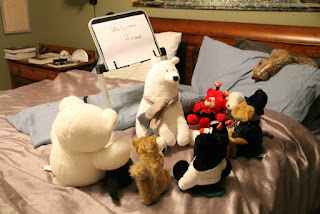 More snow. I'd put out the garbage, and realized that the slush at the end of the driveway could pile up, freeze, and be a mess. Later Monday I was out bright and early to do the driveway. We had 5 cm, and it wasn't much, but if it warmed up we'd have a nice skating rink as it cooled overnight.
Down I went. Just after I snapped this photo, a driver in a compact red car slowed down. I should have been suspicious, they scream by at great speeds. I kept on going, however, made it to the end of the driveway, and saw that the person in the red car had stopped and was coming out of the driveway up the street. I know neighbours have had issues with people dumping their garbage here. I'll bet that is what happened. 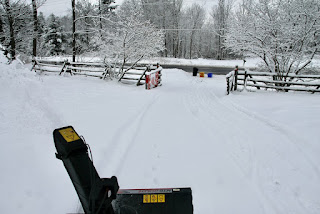 I kept on going! 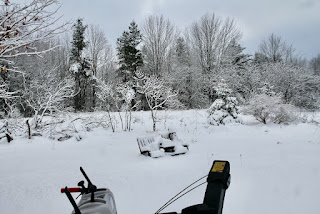 I threw down a turkey carcass for the critters. The crows had a ball:

crows from Jennifer Jilks on Vimeo.

We've a trio of young 'uns. I think triplets. One has lost one antler, the others have not! It's just a matter of time.

I often feature Richard Deer, but we need to watch for doe, a deer, as well!

...your amaryllis is fabulous. Mine is past bloom.

I would definitely prefer the indoor play!

Loved seeing the bear gathering, and the crows enjoying their turkey meal!

It is a hard pick to choose a favorite of your amaryllis. I think you have done a great job on both. Always love seeing your snuggle bears. I have been putting our seasonal ones back in their box. These are the ones I have in their Christmas clothing. I hope there were no bruises after your fall. Not very nice of the individual in the red car! Pretty snow photos and always enjoy the wildlife in your videos. The antics of the crows made me smile today. They certainly were enjoying their Turkey treat. Happy day to you Jenn.

Your amaryllis are gorgeous. I think I prefer the first photo, but would be happy to take either.
Sigh at the garbage dumpers. And thanks for the wildlife.

I like the 1st flower shot the best. The flowers seems to show up better. It is a beauty.

I like the first photo best with the center flower facing front. Love the Teddy meeting too.
Hate people who dump trash!

More snow coming. It seems like a more snowy January than many, but perhaps I just forget.

Lots to love here but especially that wonderful amaryllis. It's gorgeous!

Oh wow! The colors of your amaryllis are striking. Absolutely gorgeous!

I love your flowers. I didn't grow any this year.

Love the first amaryllis photo and the deer, especially the one with one antler.

The flower would brighten up any winter day.

It's a shame people can't be bothered to go to a legal dumpsite. I'm not sure what I'd do in response to this behavior, but I'd think of something :(