Here we are, Monday, although it is the dread I used to feel. No pressure to get up, dressed, and try to entertain educate kids all day. Time means something different these days. We get snow tires on – on Thursday.

Caitlin is still testing positive for COVID. She is feeling better, now, however. She has sniffles. Happily she is able to work from home.

🎾 We spent Sunday watching the Davis Cup tennis, the last game. I didn't know it was on TV until the final game. Felix Auger Aliassime was playing for Team Canada. Denis Shapovalov had just won his game. Then, the TSN satellite feed from Spain pooched out. I had to quickly pull up the real time scores. They won the cup.

⚽ From there we watched World Soccer, and the Canadian men's team lost 4 - 1. They are out of the tournament. The announcer said that this is "the greatest moment in Canadian soccer history." Janine Beckie gave him skank eye after he said that. She was on the women's Olympic soccer team when they won gold. He then corrected himself and said it was "on the same level" as the women's win. 😳

🌦I did my chores prior to the rainfall. We had about 9 mm Sunday. I set up the water barrel, again, as I said I would. The goldfish pond is full. 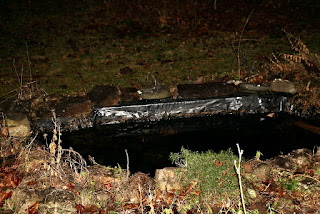 I'll have to dress warmly, as I have to put the garbage out. It is chilly, but tonight it's going to -6 C., so I have to think about draining the water barrel. We expect another 15 - 20 mm on Wednesday. Decision, decisions!

We haven't had as much snow this November as in other years. (Blue is rain, gray is snow.) 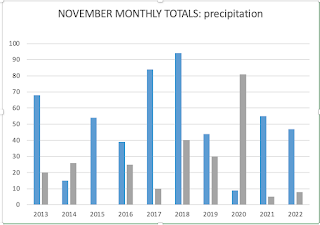 We have many dead elms. I'm inclined to leave this one here. I ought to gather some kindling from it, I suppose. 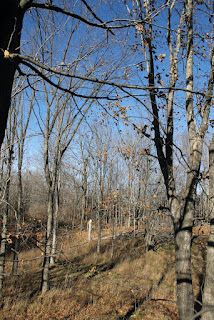 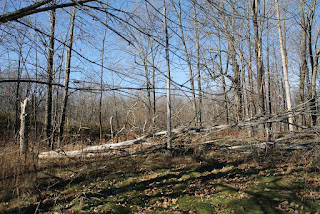 Polar bear is having a grand time hanging out with goldfish. 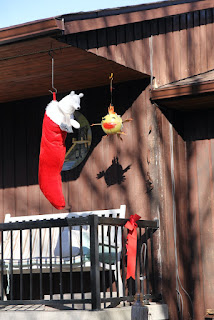 Oregano from Jennifer Jilks on Vimeo.

The best protection for raccoons is to climb a tree. They seem to be traveling in a flock, now! Or would that be a herd?! Nope, looked it up. I think the best collective noun is a committee. They argue and snarl over food and disagreements abound.

butch from Jennifer Jilks on Vimeo.

OK, garbage detail calls. I might not get dressed, but just put my winter coat over my housecoat and jammies!

Hari OM
Love all those eyes in the dark! YAM xx

Just as deer and raccoons can browse together, they'll be very accepting of your attire (as long as it makes you warm) for garbage detail.

That Janine Beckie was ridiculous. Men sometimes just really have no idea of the words coming out of their mouths, do they?

What a jerk that male reporter was. I'd like to read about an apology!

Butch seems to have developed quite the social network ... I guess their thinking is it is nice to have a friend with food connections (col).

I got caught once with my dressing gown over jamas, had to collect Hugh from a oat ramp, very early morning, but when I got there, there were others there too!!!Butch and the committee, they need to join the owls and make a new Government !!~!~

I love the collective name for racoons. And, if they are argumentative, it seems entirely appropriate.

Sorry to hear Caitlin is still testing positive.
Look at all those racoons!

I saw that oops moment after the soccer match. If looks could kill or maim he would be limping today.

I only followed the tennis reports. It’s still many months until we will watch Wimbledon followed by the Canadian and then the US. We just subscribe in those months for those events.

You could also call those raccoons a gang.

We've been watching the World Cup and cheered for Canada. Right now we're waiting to see if the USA gets out of the group.

Our temps are, of course, _much_ warmer than yours. In fact, much warmer than usual for this time of year after having much colder than usual temps a few weeks back. The dead trees will attract wildlife, I'd guess... Woodpeckers and raccoons and such? A "committee" of raccoons lol I love it! We had one on the patio once, but only one and only once.