That was quite a week. Now, why do you think Facebook suggested this ad for me?! 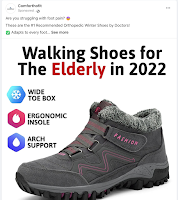 I laughingly told Caitlin that I was watching the broadcasted hearings, on the government response to the Truck Convoy, as a break from our municipal issues. The next protests are against the provincial government of Ford, who wants to pass Bill 23 to be able to pave across the Toronto Greenbelt wetlands and make his developer buddies rich. Sarah Harmer was in Smiths Falls protesting at our local MPPs office for a protest.

The federal government enabled the Emergencies Act at the time, to put in some laws to freeze occupier GoFundMe funds ($10 million), and force trucking companies to tow away the culprits. The tow trucks were bribed and/or threatened not to do so. The law requires the government to hold a hearing after the fact to determine three things:

Ottawa citizens, who were the victims of the lockdown of the city spoke. Local politicians spoke of what their citizens went through, racism, anger, the smell of diesel fuel and the noise of 24/7 honking. We heard about a baby being treated for frostbite by paramedics. This last week we had the final week, during which 7 cabinet ministers testified. On Friday the Prime Minister testified. The lawyer for the convoy occupiers read some testimonials from said occupiers. One said, "We just want to be heard!"

The Prime Minister replied with this,

"It was it was clear that they just didn't want to be heard. They wanted to be obeyed. They wanted us to change public health policy designed to help Canadians and were going to occupy locations across this country and interfere with the lives of Canadians until such a decision was taken." 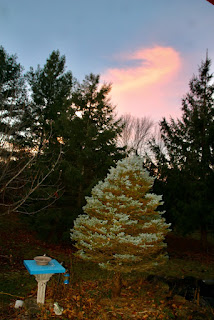 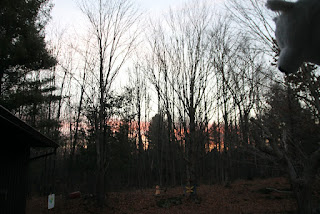 Cinnamon went out for about 90 minutes. Nutmeg an hour until she got hungry and came in. 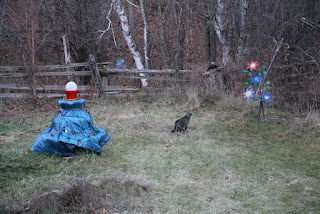 I went down to fetch SD cards, and realized I'd forgotten to turn one camera on, after resetting it. That's the one at the deer scrape. Oh well. Maybe today I'll capture the action.
Who do you think this it? I could not see it, but I could hear it.

who goes there? from Jennifer Jilks on Vimeo.

The pumpkins are popular along the driveway. I can see the trailcam light up in the dark, in the background. 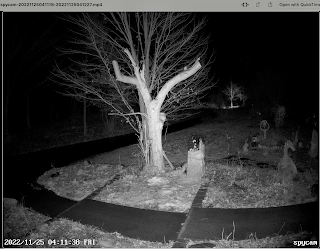 It should be frosty out there, but we expect rain today. I'm thinking of reconnecting the water barrel, just to fill the goldfish pond a tad. That will protect the 3 little goldfish I couldn't get in. The deeper the water, the better as it doesn't freeze and thaw. 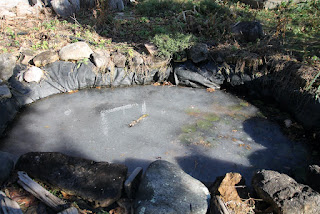 I've put out a few traditional seasonal items. Frosty is an old faithful.

Cinn and Frosty from Jennifer Jilks on Vimeo.

...I need to checkout a pair of those shoes.

Hari OM
Must say, those shoes do look comfy! And I am reminded I need to haul out the tree and decs... YAM xx

Good to hear ongoing investigations on the protest that got out of control (my opinion). Frosty and Cinn are sure cute.

Sounds like someone from the woodpecker family, Jennifer. Cute video of Cinnamon and frosty!

I also got that ad on FB. 😀
And I just signed a petition re. The greenbelt takeover.

The unseen sounds like our Quail. Those shoes look wonderful, I have Skechers, but heavier ones with a fur trim for winter, but not so good for comfort. Jenn, get whatever your feet need, ignore the "elderly" tag.

Love your idea of protecting the goldfish. And hope you can.

Thank you for the news reports but especially for the wonderful countryside. Really love it. Thank you!

Gosh! I haven't begun to think of the Christmas holiday rush yet.

How could they assume that you might be elderly. Cheeky!

I haven't been following the hearings because I can't stand the idiocy of the convoy lawyer especially.

Good on PMJT for making that comment. He is right. The convoy-ers were emboldened by the lack of action taken by the local authorities (including the provincial government in Ontario). It was clear their demands were only going to increase and their activities more damaging to economy as they shut down border crossings. If the feds hadn't taken the steps they had I shudder to think how long the situation would have lasted.

Apparently, there are rumours the convoy is planning another event in February 2023. Some people never learn.

Somehow, I don't think the Convoy people will get it that they are such fools.

Sounds like the Prime Minister was spot on. I hope they jail them all. That convoy was drummed up by our U.S. citizens who wanted to wreak havoc on your country.

I got the same boot ad. I fell for it last fall. They are crappy boots...

I'd click through on that ad if I could reliably buy shoes without trying them on. FB didn't show me that ad, though. I'm getting ads for plus-size women's clothing, but I'm 4'9" and weigh 90 pounds lol

It's fascinating to hear about y'all's protests.

Your nature photos and videos are always a treat. I'm the world's worst at identifying birds either by sound or sight. They have to be obviously identifiable for me to get them.