We watched a couple of episodes of Spooks. I went to bed to read, Beastly Things, book #21 by Donna Leon in the Inspector Commissario series. It does make me feel better about Canadian government! As I read, I could hear a cat murping. Not Cinnamon, he doesn't murp but meows. I heard JB laughing in the living room. Of course I had to get up. So much for sleep hygiene!

Here was Nutmeg, proudly celebrating the mouse she killed. She'd dropped it right in front of him on the carpet. She was quite happy to share her treasure. I suspect it was in the basement. I find that the adult mice know that there are cats in the house, but the young ones don't quite get this. Or don't run fast enough. We seldom see signs of them. 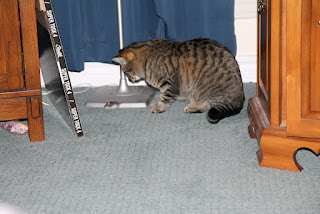 Outside it is a different tale. The lilies are growing like mad. The hostas... not so much. Our one regular doe has trimmed them. Grrrr! Actually, she's a thin one, and I don't mind. It happens every year. 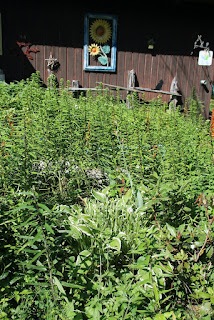 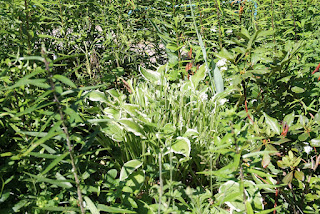 These two are nicely trimmed. Normally deer begin at the outside hosta, then a day later move to the other. Maybe I just didn't notice! 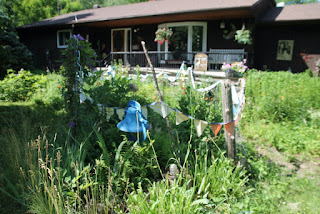 The fence works for some of the flowers. 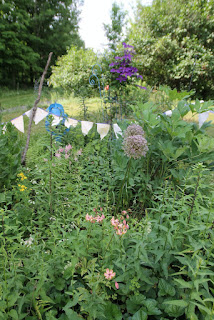 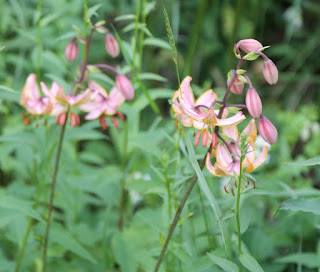 We've been a bit dry. I watered the Canna. It was happier and stood up tall. 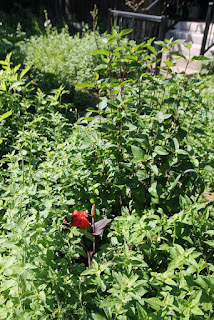 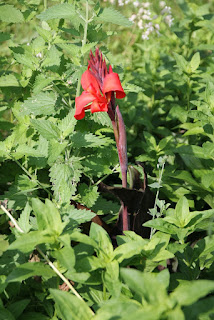 My orchid is finally showing signs of blooming. I've put some of my indoor plants on the back deck. The orchid gets morning sunshine, the other plants are hidden by the BBQ. A perfect spot! I accidentally broke off the previous bud branch. 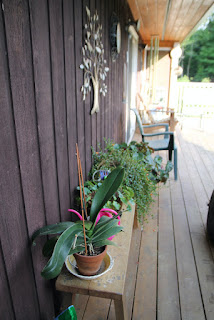 And in provincial news, our re-elected premier is trying to build a new highway, #413. It is, many believe, unnecessary. We should simply open up the toll highway, #407, to ease traffic. It makes me so angry. Highway 413 route threatens 11 at-risk species, provincial government documents reveal — Toronto Star (@TorontoStar) June 29, 2022.

We are hoping that the feds are going to get involved:

"the highway could harm three species at risk that were protected federally but not provincially: the western chorus frog, the red-headed woodpecker, and a rare dragonfly called a rapids clubtail."

You'll recall that I have participated in Western Chorus Frog surveys, as they are at risk, and the ministry is seeking to establish an idea of their population numbers.

What else did Doug Ford do? Ontario's new minister of natural resources faces environmental charges

Smith is charged with harming or harassing Blanding's turtles, designated by Ontario as a threatened species, and with damaging or endangering the habitat of the turtles. The Town of Bracebridge itself and two senior municipal officials also face identical charges.

Premier Ford announced his new cabinet ministers. There are a couple of surprises. There is a new Minister of Red Tape. (I kid you not!) You know what this means: someone dedicated to reducing oversight, ignoring the environmental issues, and giving free reign to developers.

He chose Graydon Smith to be his environmental minister. This is the former mayor of Bracebridge, who is charged with paving over the endangered Blandings Turtle habitat in Muskoka, despite environmentalists making presentations to inform his council of the egregiousness of this act. They went ahead anyway.

I leave you with this:
One must remember there are good people in the world. I watched the Canadian Indspire Awards the other day. They gave an award to a First Nations entrepreneur who has created this ethical company. Cheekbone Beauty is amazing. They give back so much and inspire! Rich white men build an empire. First Nations women take care of themselves, one another, their community, and the earth. They believe in sustainability. 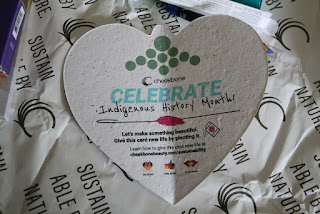 ...for years is have successfully grown hosta, this year the deer have found them.

It's so nice to walk about your garden, and see how things are coming along (or not, thanks to Ms. Deer) Glad to see the efforts of environmentalists, though they often get sidelined.

Oh those kitties. Ah that Ford.

I'll never understand why some don't see a need to protect our environment.

The Donna Leon books are good at showing government corruption, better at it than the US mystery writers I've read.

I really, really hope that the new Highway can be stopped.
Sadly we sometimes NEED red (and green) tape for the sustainability of this planet. Something I wish that more politicians realised. Or could be made to see.

Your garden looks lovely. Cinnamon is a cutie. The deer here have been eating our daylilies. I am just starting the Donna Leon series. Take care, enjoy your day!

Our hostas are sending up flower spikes now. Politics, especially in Ontario is really getting me down. All but 10 of his cabinet ministers are now getting a pay rise as he gave most of them extra titles for extra pay. Whatever happened to trying to save money. Rant over. I'm fed up with politics and am trying hard not to read any more.

I'm sure that there are many situations that some governments just want to plow over. We have issues here. They wanted to push a wide road through a ravine that is good habitat.

I've tried all day to leave a comment. Cats are always proud of their accomplishments. I haven't seen any mice here, but when I lived in Missouri, a mouse got in my house and my cat (whose name was Dog) played with a mouse, brought it upstairs and placed it on my bed (I was asleep at the time), then grabbed it, took it downstairs and played with it some more. I got tired of hearing him play with the mouse, so I got rid of it by putting it outside. Dog had no sense of killing, but was sure it was one of his play toys.

Nice to read about the First Nations women who are taking care of the earth. And of course, it's too bad the environmentalists don't seem to get the last word in protecting the environment.

I hope the new highway can be stopped, too many destructive roads are planned and sadly few campaigns to stop them seem to be successful (over here at least). Cheekbone Beauty looks like a great company .

Wishing the best for the Earth, for nutmeg and for you dear

I'm glad a First Nations fellow was recognized for his good work. Or was it a woman? That would make it even better.