The heat has been atrocious.

We've a female red squirrel. She was pretty hot, running around. She lay down on the branch in the shade until I apparently disturbed her! She was watching me clean the goldfish pond. 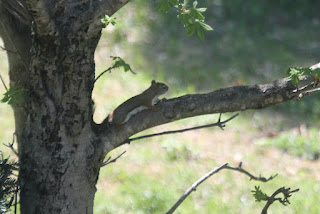 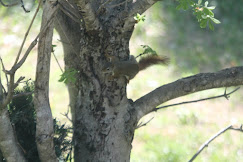 Even Cinnamon took it easy! Here he is in the Muskoka Room. He prefers it to the A/C! 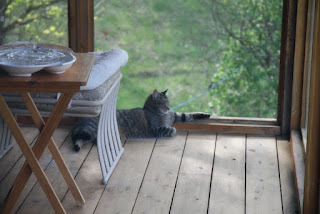 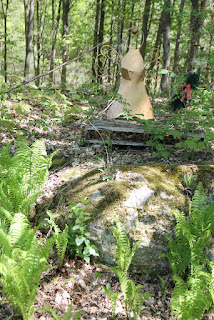 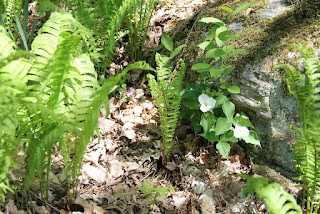 Someone posted photos of their ladyslipper. That inspired me to go check our little nook. They are coming along. I've snapped photos, so if I forget to go back amongst the 6 billion mosquitoes, I'll have proof. They are late this year. 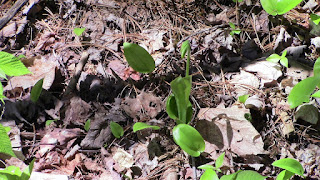 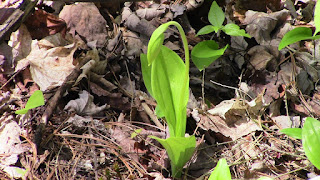 Chores take a lot of energy. Some we are happier doing, especially involving water! JB is filling his water fountain, it was a surprise gift for him a number of years ago! 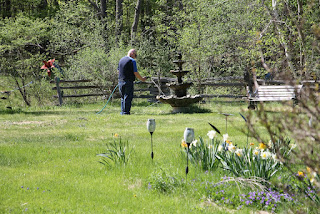 It's taken me three days to get it all done. Fishies out (day 1), fish tank drained (day 2), equipment cleaned (day 3). Finally, day 4, I reassembled them, now that they are dry, and get the tank ready for October! 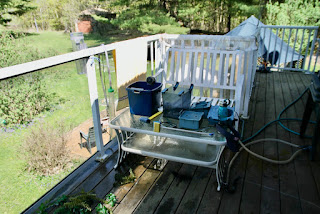 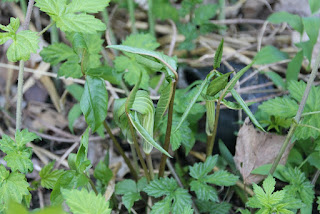 The season is well on its way. I had to get the anti-itch cream out. Blackflies and mosquitoes. There was a mosquito in the house while we were watching Vera!  If you look closely in this photo, you can see even the mosquitoes were hiding from the heat in the shade. (No, not that much dirt on my camera lens!) I've been cleaning up, placed the cans in there, slowly backing away from the horde. 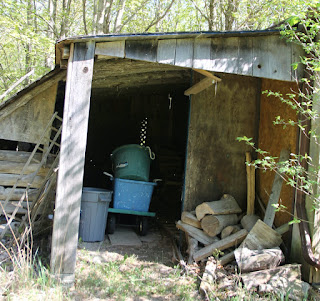 My Aspen grove is doing well, despite the spongy moth attack last year. 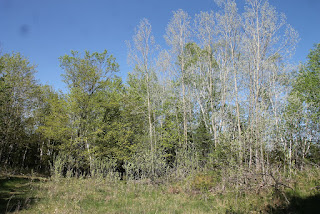 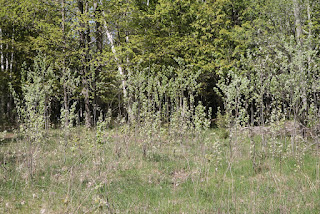 The big news is that two of the robins have hatched! I'll bet the third is out, as well. But I try to avoid the area. This is an image from June 2020. We had a drought, and I didn't realize that even as young as this, the parents will follow and feed them. 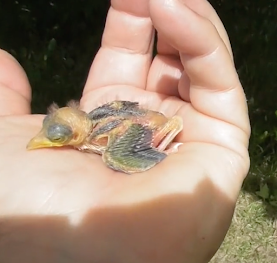 We're up to around 11 eggs in the wood duck nesting box.

Hari OM
That's the nature of things now - one extreme to the other... not that it is happening over the Hutch; still dashed cold and wet here! I wondered when the fishies would be out and about again - you certainly have plenty to keep you busy. YAM xx

Love those early spring wildflowers so much!

That is a lot of baby Wood Ducks to come!

Our spring is also late, but luckily we haven't started the heat wave yet. Yesterday was a brief rainstorm, this morning sun. So I guess we are doing well here in Michigan. I don't know where you are, but I guess there's heat all over.

I remember when Mother bought trillium and tucked it in a bed near an oak tree. Sweet! Our robins are so high up I can't tell what's going on with them lol I hope they spend some time where we can watch them on the patio. 11!!! So many eggs!

Cinnamon is enjoying the view. I've been watching a few slow living videos. They gave me a renewed sense of appreciation for doing chores.

I love the ferns, trillium and the Lady Slippers. We are seeing some pink lady slippers blooming off our trail now. Take care, have a happy new week!

Lovely to see all these photos of Spring in your part of the world!

As time moves along, I expect I’ll get updates on the Purdon ladyslippers via FB. Was I there two years ago? Could it have been three?

Did you get the lightning too?

After all the cold and wet we don't need extreme heat.