THAT was a storm!

Well, THAT was a storm. I could see it coming. I'd done the lawns, knowing rain was on its way. Little did I know.

The girls were to arrive Sunday for a long weekend visit. (JL was driving his mom home to N.B.) I was about to make some banana bread, but held back. It bakes an hour. If we had a power outage... I'd be sorely disappointed. Then I had a smartphone warning for the storm. Things got darker and darker. Normally, we prepare by filling bottles of water. It just looked like a brief storm. We had an emergency text, warning of the impending storm.

I'd heard a posse of perhaps 50 motorcycles passing and traveling south just before the storm. I wondered what happened to them all. It sounded like a military helicopter.

May 21 Motorcycles from Jennifer Jilks on Vimeo.

The storm sailed on by us, thunder booming up above, but we didn't get the worst of the wind and rain. Then, the power went out. Giant whoopsie.

Cinnamon and Nutmeg thought the frogpond was lovely. They were fascinated with the goldfish, especially big Percy going around and around. Normally they aren't as visible with the pond pump working. 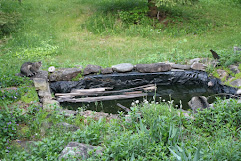 There was nothing to do but find flashlights, reading lights, and relax. Aside from our witty banter amongst ourselves, we read and hoped for the best.

For us, no electricity means no water, once the pressure tank lost its pressure. The septic system works on gravity, so that was OK. I had water in the water barrels, bringing that in to flush with, once the toilet tanks were empty, we we able to 'powder our nose.' Also, we left the garage door open, as it is electric. This might have been a mistake, as our bear is roaming the neighbourhood. He didn't come in, though.

Caitlin and the girls were to come over, but Ottawa was hit badly, as well. I texted Caitlin, but her phone was wonky. She'd phoned, but was running out of power for her cell phone. She phoned later, having plugged the phone into her electric car for power. We were able to catch up and check in. Our phone was down to 53%.

I turned on my little transistor radio: there were local Ottawa stations providing information. I'll have to remember 101.1 FM!
This is glamping, with a crank radio, and BBQ, but the Ottawa kids were good. They were out a 3:43 Saturday afternoon. It'll be days. 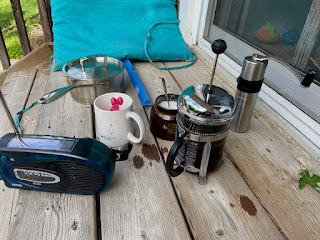 JB went to the local gas station at 6 a.m., fetching bottled water. There was only this store open, running a generator for the cash. No coffee, though. People were buying extra gas in large gas cans. When I walked about here at home, I could hear a half dozen generators. They are valuable in the country. We couldn't possibly, as we couldn't lift and manage one.

It is funny, having lived two weeks without power during Ice Storm '98, we knew the routine. Sadly, people in Ottawa were complaining to Ottawa By-law officers that the generators broke noise by-laws. By-law sent out a Tweet saying such laws were suspended in this emergency. Imagine!

One First Nations person Tweeted this: "Power is still out but, guided by the wisdom of our Ancestors who lived off the land for generations, we have immediately checked into a downtown hotel."

My first job was to make coffee. This wasn't my first rodeo!

Checking in with the kids, I found out what was going on. They were glamping. The kids baked bread on the BBQ, as well as nachos. Of course, I didn't find this out until our power came up around 2:30 on Sunday. What a relief! Our Internet came up, then went down. The damage is extensive in a large area. 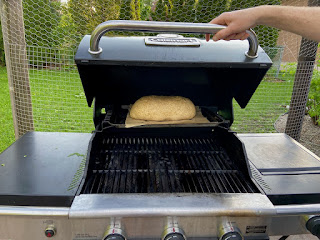 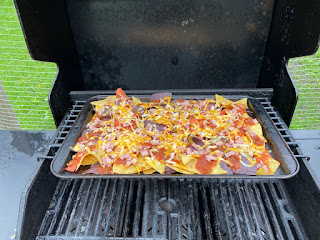 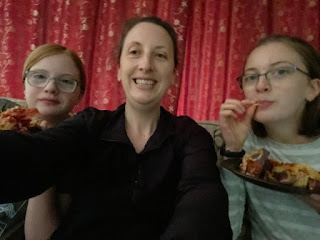 In the first 24 hours after destructive thunderstorms passed through the province, Hydro One crews have restored power to more than 360,000 customers, with over 226,000 customers that remain without power. Damage includes at least 800 broken poles, and just as many downed power lines, along with countless trees and large branches causing power outages.

Ottawa was a mess, as well.  There were so many hydro poles snapped in two, that even driving out of the city was difficult and dangerous. News reports were ominous. I searched Twitter: #ONStorm, and found lots of reports of disaster.

East of Ottawa was bad, with several barns smucked. Firefighters had to help farmers get animals out of smashed barns. They built shelters, as well.

The Ottawa mayor was on media. He said that Bylaw, Ottawa Hydro, public works, paramedics, police, fire, and OCTranspo, were called in to work on this Statutory holiday. Bless their hearts. Ottawa firefighters are going door-to-door doing wellness checks.

Many places are a mess. The township of Uxbridge, particularly. Cars were flipped. It will take days to come back. Caitlin and Isabelle did an Ottawa walkabout, and found lots of debris, and trees down. These are their photos. 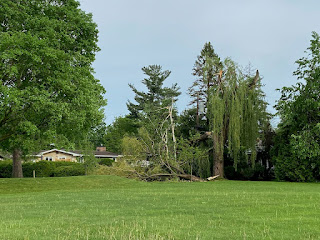 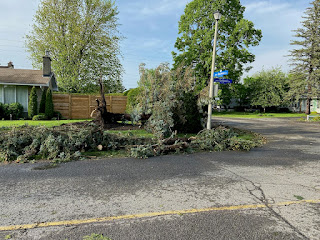 It went from 73,000 without power –  to 277,084 without power once workers made assessment. HydroOne texted us Sunday, at dinnertime, suggesting we'd have power by 11 p.m. They were wrong! It was on in the afternoon.

All across southern and eastern Ontario there are wicked spots. 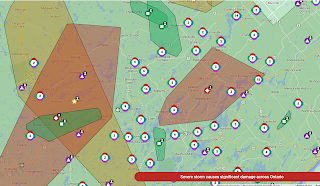 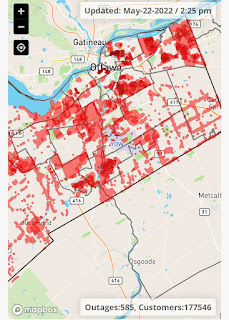 Monday morning, as I was writing this, I had a phone message from HydroOne, checking to see if we had power. You can text back if you don't. We were good! So far, only 9 deaths, although there were many injuries.

We'll have to assess the food in the refrigerator. The freezer food will last 48 hours. Dairy, meat and leftovers, only 4 - 6 hours. We had some Korean food for dinner that JB fetched from the local market. That was good.

According to the experts, the 1000 km derecho affected 41% of Canada's population, along a long swath. It's quite different than the smaller tornadoes that also hit Ontario.

The schools are closed Tuesday. I snorted when I read this from Ottawa public schools OCDSB. Trees are down. Families don't have power. People are buying up ice cubes, and they are running out of those in many stores. City peeps have water, but their food is spoiling. They might go to virtual schooling? Families are cleaning up, they are scrambling for supplies. They don't have HYDRO!!!!

UPDATE:
Ottawa Hydro reports that power has been restored to 70,000 customers, with 110,000 still waiting.  It was such a wide swath of damage. About half the schools don't have power. There is much damage to clean up. It'll take 2 - 4 more days for Ottawa to come back up.
The kids have moved in with us. The damage is really spotty, with some neighbourhoods having power, others not.
OCDSB suggests they'll go to virtual school, but so many students and teachers do not have power.
Crews were coming in from Toronto, Kingston, N.B., Quebec and the US to help with the clean up.

Peterborough was hit, as well.

Sorry for what you went through. We cannot prevent Nature's calamities, but we could be better prepared to avoid damage and loss.

...we dodged this bullet.

Wow, that was quite a storm, and that's an understatement! Glad you all are able to cope with your outage, and then have return of elec. Yes, it will be one to remember.

That was quite a storm! Glad to hear that you made it through without too many issues.

And so quick it was matbe half an hour. We were lucky but many trees downed on other streets

Glad you came through okay 👍🏽

Wow, Jenn. That's even worse than the Cat 3 tornado that hit our Gaylord. I wonder if it was the same storm, given the trajectory of the weather and the timing. Could be. I'm grateful you didn't get that banana bread in! You ARE equipped for handling such things and do it well! We have the same pump/septic situation at the cottage. Thank goodness for available water! It looks horrid all over Canada. Thanks for posting about this -- we didn't hear that much about this storm here.

We were fine but friends a couple of blocks away didn't get their power on until last evening. I have a wind-up radio too and always make sure to have cash on hand. And cans of food in the pantry.

Glad you're ok. The damage swath sounds worse than Kansas tornadoes. 800 poles down is a lot of replacement work. Interesting how power runs your water system.
While all new plumbing was put into the ceilings of my apartment unit, we tenets got 2.5 gallon water jugs with the spigots for our sink counters. I can't lift the 5 gallon jugs. (The spigot on some brands can be pried off with a flat tool, like a wide screwdriver. Then it can be refilled at someone's garden hose and the spigot put back on.) We refilled gallon jugs a lot. safe. Linda in Kansas

Wow! That was some storm! Glad you are okay.

No power outages at my place.

I'm glad that you are safe even though you're a long way from normal.

Oh my goodness, it was a terrible storm and I am so sorry for all the destruction. I did enjoy that tweet, however, which shows people still keep their sense of humor in such trying times. I do believe it keeps people going. Thank you for another very interesting and informative post Jenn.

I should have added, most importantly, I have never ending thanks to all those people who in every way help everyone to get back to normal.