Winter carries on. It was a balmy -14 C. this morning. Cinnamon continues to sleep at my feet. Several times a night, he likes to come over to me in the dark and pluck the ear buds out of my ears and drag my radio or iPod onto the floor. He's a character!

Nutmeg sleeps alone in the guest room on her wool bed.

First thing, the cats go out to check for mice friends. Jan. 23.  cats on deck

I went out in my snowshoes, again. It's good, hard, physical therapy. 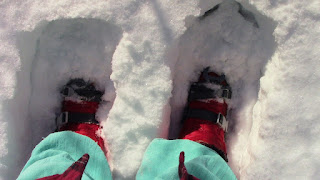 Our great excitement is the action across the street. They are purportedly building a retirement house. The sumac were cut down. A parking spot was created. As I emerged from the meadow and my snowshoeing, there was lots of action. Hubby spoke to the owner and he was assured that this guy would be the best neighbour ever. I've never spoken to them, although they have been working here a lot.
The noise, the beep beep, when they back up is disconcerting. Also, a porcupine was living in the rocks. I hope s/he has moved on. 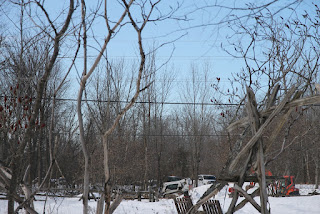 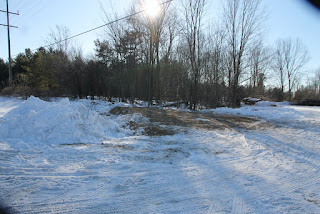 Cinnamon came outdoors, but didn't venture far. He did 'bear' again. I'm not sure what he heard, but he is vigilant. That's how he survives outdoors!

I've been playing around with the trailcams. We finally saw Henry on the forest trailcam. That was comforting, as we hadn't seen him around the house for a few days. The placement of trailcams is the big challenge for all of us using them. This one was fruitless until now.
If you watch, you'll see her walking along the sidewalk. That was my own fault as I sprinkled some sunflower seeds for traction on the ice. She recalls that! sidewalk doe:
deer feeder:

There are lots of deer in the yard. If you watch to the latter portion of the video, you can see the deer munching on yummy dead, dried weeds at the back of the yard.

We had a robin on Wednesday. It's not spring. It's just overwintering. I have a page where I track their nests over the spring and summer. I've been tracking its visits. 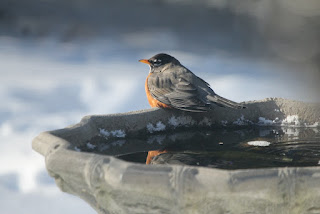 Not unheard of for robins to spend the winter.

Cinnamon is so nice! Adventurous but careful. Nice shots!

We need a bit of January melt! Or maybe February.

We are still in summer but 12C this morning, almost what I call cool!!! Love those deer coming to the feeder trough, I wonder do they ever get very close to you if you stand still? Keep warm.XXXXX

Perth is a great spot for retirement homes. Did you know that Lanark Lifestyles has plans to build in CP?

The cats are looking awfully cold! I would think a retirement home nearby would be a very good thing! No heavy metal at 2 a.m.!