Cinnamon and I went to the island

This is our little island in the middle of the wetland. Several trees have fallen over. It looks like good habitat for one critter or another. I hadn't been able to make it out there as the ice was uncertain. Jan. 8th I ventured forth with Cinnamon. 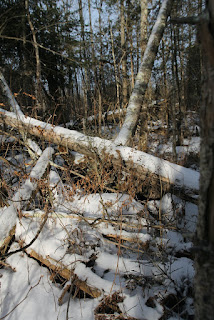 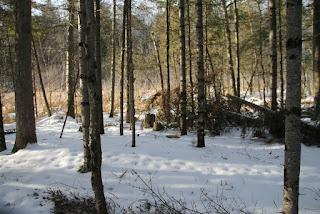 It is quite pretty, and raw, and this was prior to the knee-deep snow we had. 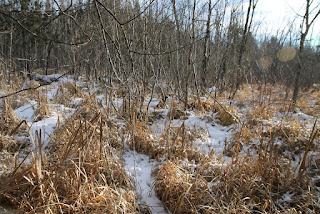 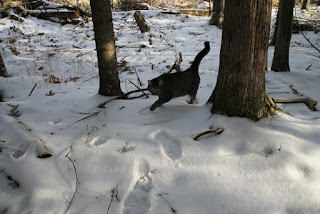 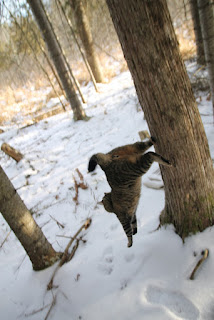 I could go and scrape off the LDD moth eggs. 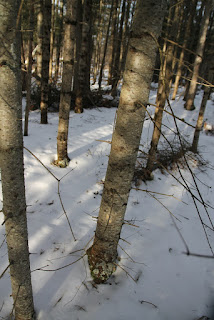 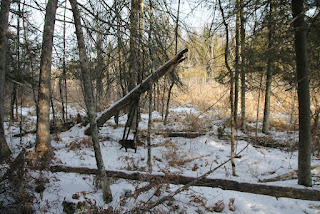 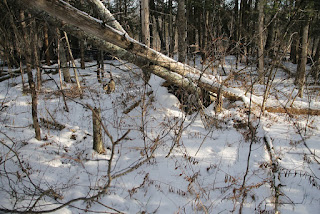 He went up the tree! 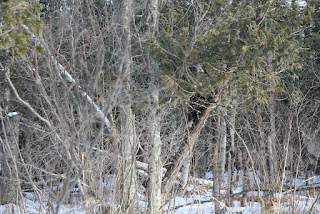 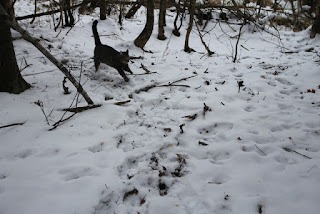 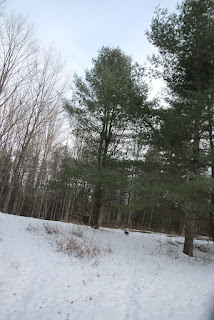 In the middle of the wetland, he climbed a tree, and was watching something. "You're on your own, Mummy!" I hope it was a deer or something. He is quite alert. This would have been a great photo of him, except for autofocusing on the foreground! 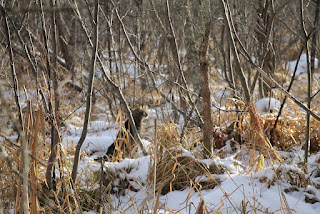 First he led me down the deer path, they he climbed a tree. He was looking at something. I figure a deer, or a coyote!

I went walkies alone Monday, it's just too deep for Cinnamon. (Although Daisy would trod in my snowshoe steps!) He's such a sweet boy. I thought I'd walk down without snowshoes on Tuesday, and that was a mistake. I'd forgotten I'd not broken a track through, but around The Point to the wetland. Whew, I was tired. Good exercise for this old body!

I was happy to hunker down indoors with both cats! They were sitting at our feet, together.

They've been playing together a lot, it being -25 C. this a.m., things have been chilly. We were watching The Repair Shop, and could hear things going on around the corner in the dining room. Nutmeg was on the table flicking pencils onto the floor for Cinnamon who was waiting below! I laughed. 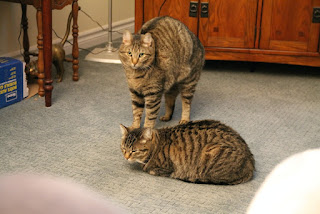 It must be fun to go walking with kitties.

Awww, that's fun of them to be doing!

Hari Om
Cats are the whiskers at self-entertainment! YAM xx

It really is fun, John. Nutmeg won't come along, not in the snow. Cinnamon is a trooper. He snuggles at my feet, or in my arms, mot of the night.

She fun with outdoor cats! I didn't know they could do indoor "crayola baseball" though. What a team! Linda in Kansas

It must be such fun to walk with a cat. And it is company for you!

Cinnamon does seem to be having a wonderful time there!

Lots of fun out there with Cinnamon. And I laughed to think of the kitties flicking pencils for each other.

It is really fun and exciting to see the two of you out there! Here's a tip: tap your picture where you want it to focus. I mean the screen you're looking at to frame your shot, tap the place you want to be the focal point. That works for me sometimes. Keep up the good work and give our thanks to cinnamon

Jenn - I went out today to collect some pine branches for some arrangements, and the snow was up to my knees! Came right up over the top of my Wellingtons! Your cats are so adorable!

Are you sure Cinnamon isn't a dog in disguise? I just love how you walk together!