What a start to the weekend. Two weeks ago I was chopping veggies and made contact with my thumb. No blood! I've been watching too many cooking shows and was careless. Friday I was poking holes in a cooking bag with a fork and hit my thumb. (Freezer dinner!) I hit it hard. I screamed, and someone who doesn't hear very well heard me from the basement, where he was watching a football game beside a cozy fire. There was a lot of blood in the sink. JB brought me a nice fat bandaid and we carried on.

Thankfully I'd already wrapped my present from JB! The one with black tape shows the time someone couldn't find the regular tape! More tape has since been bought! 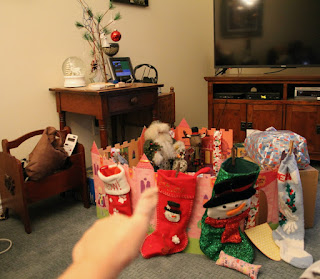 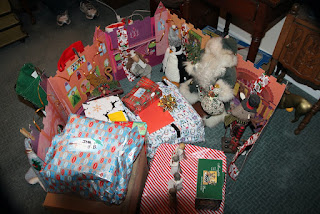 I was taking out my frustrations with the fork, methinks. It was a frustrating week. I had an appointment for a haircut, and he was 20 minutes late taking me. I sat there, trying to cool my jets, but anxiety kicked in. It was awful. You go there to relax. I think he fit in a spouse, while he had his hair cut, she slept in the chair. I had to go ask for water, they used to provide that. They had a bottle of warm Perrier.

Still no booster vaccine booked: Funny COVID–19 vaccine story. I still haven't sorted out our taxes:  Canada Revenue Agency (CRA)😓. The bank hasn't reversed the mistake I made, and I requested the correction a week ago Wednesday. Ah, well. It's only money. Interest rates are pretty low right now, so there is that.

The news is awful. Of course that is the nature of the news cycle. If it bleeds, it leads (see above 😏)! There is Hope from B.C. They'll have a long recovery.

British Columbia's rain has finally stopped. They had a good update regarding agriculture:

UPDATE:
Poultry: chickens; 61 poultry farms in the evacuation zone. Good news: 97% of laying chicken survived. Also, 98% of the turkeys survived.
Dairy farms: 98% of the cows from Sumas Prairie survived the flood. The rugby association players cleaned up 100s of stalls, removed stuff from basement. Also, the hockey team has been working like this. People helping people.
Sadly 110 beehives were destroyed, but they can be rebuilt. 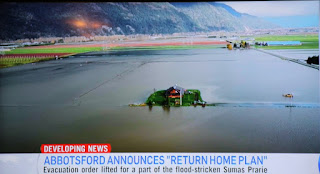 The damage doesn't affect most of the ski resorts, Jean. This damage is in the mountain passes. Jesse and Cluny are signed up for ski lessons. They just have to hope for colder temperatures in order for the ski hill to lay down some snow.

My Cinnamon baffle on the fishtank is working to keep him out. Sadly, it was too cold for him to go out for a pee Saturday morning (or so he said), and he began working on the styrofoam, picking at pieces with his claws and tearing it off. Little dweeb! I put another book on top. That solved it. 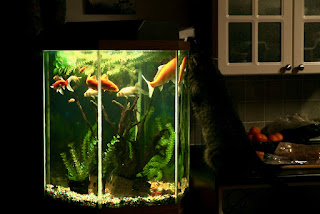 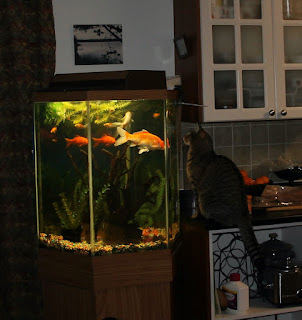 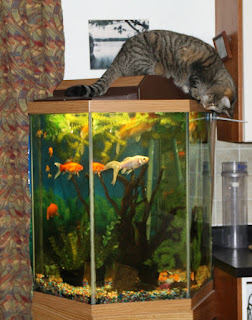 The silly thing is that I've always fed them from that corner. Percy goldfish keeps going to that spot every day. The smaller, younger ones get it, but he's been fed in this corner every winter for several years. I'm having to clean the tank more often, as he is so huge. 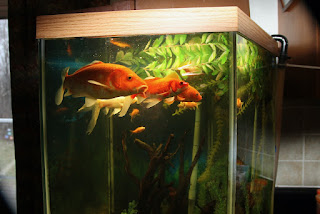 I've been playing outside in the sunshine. This is the BEFORE and AFTER! 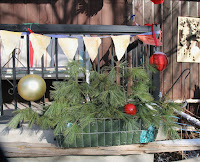 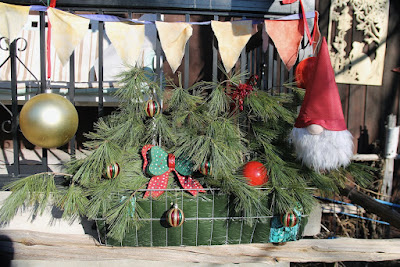 We shall keep on carrying on!
Posted by Jenn Jilks at 07:29

...keep playing in the sunshine when you can.

my understanding is that goldfish are quite dim-witted. Yours seem to confirm that impression.

I agree. Those fast chopper chefs have a lot answer to. Take care and stay dry.

Be careful with those sharp objects!!

Love the cute kitty on top of the fish tanks!
Have a great day, enjoy your new week!

Thank you so much for stopping by my blog two days in a row. Sorry I'm not as "talkative" in my comments as usual. I had to laugh at your large fish. The best way to train any animal is through rote repetition. You trained that fish so well to go to the same corner that he will have a hard time unlearning where to get fed. I'm SO lucky. My cats don't climb, but I see Cinnamon seems to be a disaster waiting to happen daily.

Again, I appreciate you and can empathize with your untimely thumb accidents, too. Certainly NOT a fun experience, either of them.

Take care of that thumb, and you have the parcels wrapped!!! I still have to buy some Christmas paper. B C, so glad the damage didn't take out all the farm animals, when this happens people just cannot save every one, and maybe some were in barns or coops. Did I mention that a friend's friend lives in Ymir? population very few, near the Selkirk Mountains. I haven't heard how they are yet. Down here had a few days AWOL, to stay with our older daughter, probably the last time for a while, we now need our Vaccine Pass to be shown at most cafes and lots of other places, thank goodness for a smart phone.

Once I've hurt a thumb it gets hit several more times before healing. Damn it! You wrap your present from JB. LOL. Your house is an adventure.

You are organised with the wrapping of the presents. It is very easy to cut oneself with objects in the kitchen. Enjoy the sunshine when you can.

The fish must wonder about the cat.

Oh your poor thumb. Hopefully we get boosters soon

I save your posts, Jen, for when I know I can quietly read them and enjoy your photos, etc. As usual, love your trailcam photos. So many coyotes and I have yet to see one here. But I wonder if they are night time visitors here too. All the critters look healthy which is good.
Hate when I injure myself. Now moving wood I have to be careful not to drop it on my foot...did that once, never want that again.
Messy weather here today, snow and then freezing rain.

I would have screamed too. That sounds awful. (Having once stuck a fondue fork into my little finger while trying to poke a potato, I know the shock of something so sharp.) I hope it heals soon. Now, you be careful out there -- and I hope the booster comes through soon.