Chad Coyote (the girls named them!), was in the backyard. It is obvious that he is wary of the house, and glances at the windows checking for humans. That is a good sign. That and the fact that they don't come around in the daytime.

Chad in the forest is another story. There was something up at the house to set off the motion sensor spotlight at the house. As he leaves, he went up the hill and pooped on the path!

We have a bigger buck than Carl. He's not all that big, Tigger lived longer and had a bigger set of antlers. [Tigger: More deer tails and Whitetail Savvy] 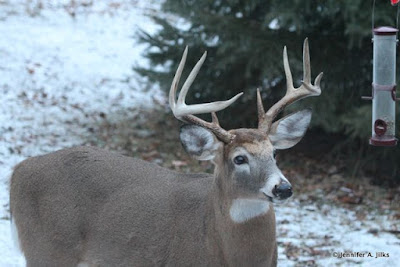 But Gerald has a respectable set. He is maybe 3 years old. I texted and asked for a name; Josephine suggested we name him Gerald! I've not seen any deer scrapes, where they mark their territory during rutting season.

Having the trailcams at either end of the path captures them coming and going. Carl saw me coming, and hoofed it.

Next, Gerald appeared in front of the window. He was trimming my peony plant, which is dead for now, of course!

For more critters: Saturday's Critters # 415, thanks to Eileen for hosting!

...you attract quite a collection.

I am sure the kids had fun naming the critters, I guess you can tell them apart somehow. I like the bucks, they have the nice antlers. Thank you for linking up and sharing your post. Take care, have a happy weekend! PS, thank you for leaving me a comment!

That really is a BIG buck! Our deer don't get that big here in Florida. Love that they name the animals...I like to do that too! Happy weekend!

Being wealthy, you're never short of a buck or two.

I keep talking about getting new trail cams but haven't done it yet. I know there is something in the yard after dark because the dog goes tracking like the good girl she is when I let her out in the morning.

We have coyote issues in Toronto

Your trail cam is so good in capturing animals doing what animals do rather than not seeing the animals at all were you to venture out. I would love to see the coyotes and invent a name or two as I am intrigued by your naming system. Depending upon the species and their habits/lifestyle I think I could find suitable names.

Thank you dear. I love joining you so much. Wishing you all the best

Hello ,:=) These deer creatures are wonderful sightings. I think Gerald is a fine respectable name. It's beginning to feel like Christmas when I see lights on a tree.
Have a happy weekend.:=)

When we lived in Southern California next to a large regional park we got packs of coyotes running behind our condo. They got so brazen that they would sometimes walk down the streets in daylight. We had to make our cats indoor only. They were all rescues so it was a hard transition for them. - Margy

Your yard is busy at all times of the day!

Not much left of the pumpkin now.

I do like the names of the critters :)
Great videos and photographs.

Wildlife in your back yard is really neat. I'm staying with relatives who have foxes in the neighborhood and it's really fun to see them -- they even appear in the daytime.

Good that you see them often enough so that you can tell them apart.

I always love the assortment of animals your trail cams photograph, and to hear your voice as you talk about them.

I just had so much fun catching up on life in the cottage country -- you have been busy, fun stuff and you make even routine and annoyances (like the tax mixup) interesting. Enjoyed it all, but absolutely love your trail cams and the fact that your grand-girls named the animals you capture on it. What a wonderful place you live!

Gerald seem to be a nice one :)