I had chores. I wanted to fetch the trailcam cards and tidy up from the storm a bit. As I looked around, I realized that there is another tree down. It was dead as a door nail.
The wetland is nice and wet. 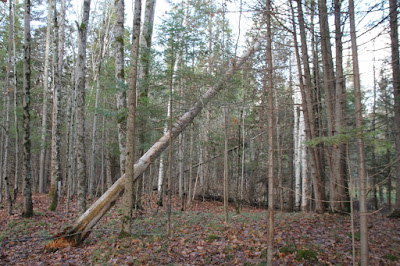 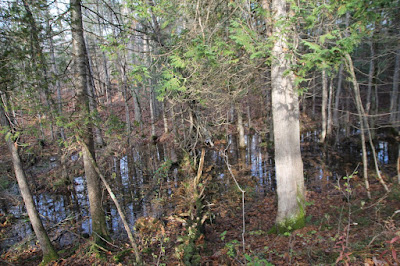 Chores: bringing in lawn ornaments. The freeze/thaw isn't good for them. 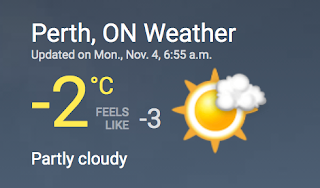 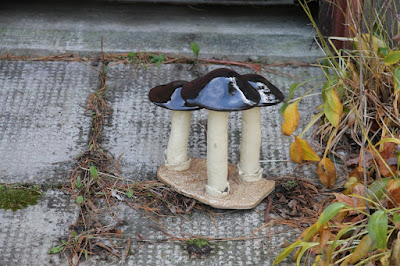 I mulched these huge catalpa leaves with the lawn tractor, which hubby swept off the back deck. We don't rake too much, we mostly mulch. 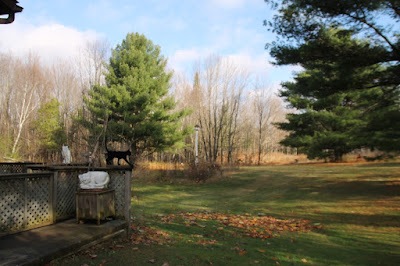 This was really exciting. Hubby came back up after his morning walk and told me there were two fresh deer scrapes. Sure enough! The first scrape is at the back of the yard. They've scraped there before.

The second was RIGHT IN FRONT OF THE TRAILCAM!!! This is a new spot. 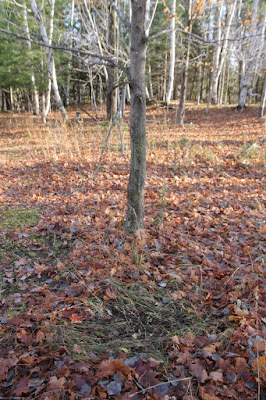 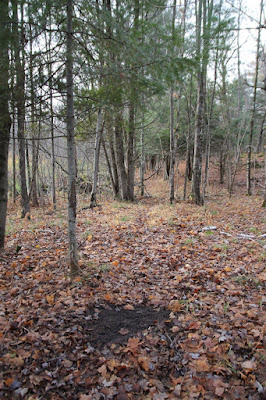 It was a busy Sunday. I had failed to recharge the batteries and they were down to 40% after all the buck action. Can you believe it?  I had to run down in the daytime to put in charged batteries. With all this action, they really drained the battery.

First job, insert the fresh batteries, remember to check that the clock is correct. I even checked the time on the videocamera, just to get the correct time. Sadly, I'd forgotten about Daylight Savings. It's an hour off.

First they scrape out a clear spot with their hooves, then they urinate on their tarsal and metatarsal glands to put their scent on the scrape. They also nudge the branches above to put scent there from their preorbital and nasal glands. From October to December they aggressively scrape as testosterone levels are high. Charlie Alsheimer has written a lot about this. He says there are three placements of scrapes: boundary, primary and random scrapes. This scrape is a primary one, I think, on a major trail all the critters use. (You don't want to look up too much of this, as some of the images are pretty gruesome.)

Meantime, our four raccoons are still around. We threw a potatoe and some left overs down there.

4 raccoons 3 from Jennifer Jilks on Vimeo.

Hari OM
Exciting to see such activity... well-written article on that link, but there is something of a contradiction in the title "Christian Bowhunter", don't you think?! (In his bio at bottom.) YAM xx

I'm always amazed at your knowledge of nature, Jenn. We had a huge catalpa tree across from our house in Illinois. Those leaves WERE huge.

Brrr -2 that's chilly!
Thanks for the videos.

Interesting about the deer scrapes.

I remember catalogs trees in Colorado as a kid. As far as I know they're not here in South Texas. I really appreciate your knowledge on deer scraping...never heard this terminology before tonight. Very educational.

We are always trying to scrape up blog material.

The breeding pattern is somewhat complicated. Most nights when I go for my walk I see some activity. There was a group of four bucks. I think they came to an agreement as to who's boss and I only see the one stiff old guy.

Interesting comment, Yam, but I don't know that being Christian means one doesn't eat meat?

Really, AC, you are a punmeister.