The process of cancer treatment in a time of COVID

JB has quarterly injections, taking a PSA test prior to each one. This is our life. He was due last week for his PSA test. He went in to LifeLabs early, before 7:30 am. when they open. There was another client there, someone who had been fasting. The door finally opened, but they said they were only working by appointment, which she made for them. 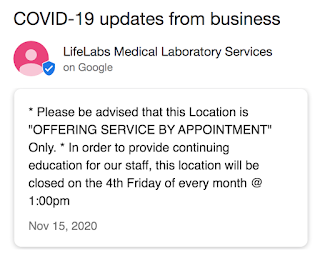 They gave him an appointment for the afternoon. I wonder what the other poor man did all morning, fasting, as he was. JB's appointment was for 1 p.m. No fasting required. In he went.
It took three stabs, and two technicians, to get the blood they needed. It is rather stressful and tiring. He has small veins. 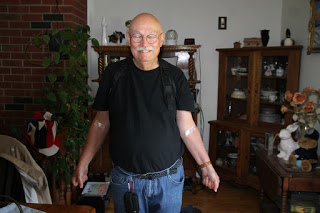 I've complained about LifeLabs before: Prostate cancer in a time of COVID–19. We aren't the only ones complaining, either:

Next, you wait a couple of days to read the results online. The test was on Thursday, and Friday only the one count was in for the testosterone, not the PSA portion. JB emailed Friday. Nothing all weekend. 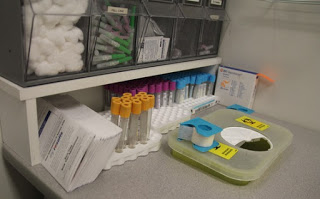 Monday morning, still no change in the online data. I was sure they didn't work weekends. He phoned, and it rang once, and it hung up. They don't take messages. He tried twice in the morning, once in the afternoon. NADA. No answer. They simply are not answering phones at the lab.
JB gets requisitions for these tests from his doctors. He's got one for this month and another for March, the next time he needs to do this again. Neither doctor's office (our local GP nor the urologist/surgeon in Ottawa) were taking calls due to COVID keeping them busy. How can he get another requisition sheet, signed by a doctor? (I wondered about the ER.)
Now, in Canada, all this is free. The various testing labs are for-profit, the tests, however, are free with OHIP.

Lifelabs LP is located in Toronto, ON, Canada and is part of the Medical & Diagnostic Laboratories Industry. Lifelabs LP has 3,000 total employees across all of its locations and generates $977.91 million in sales (USD). There are 340 companies in the Lifelabs LP corporate family.

Now what?
I posted it on Social Media, with the @LifeLabs handle. Life Labs replied. 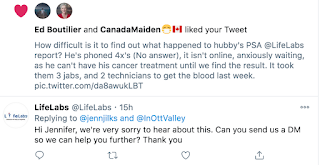 At 8:26 a.m. they replied on line after I DM'd my phone number. The manager phoned us and she took JB's Healthcard number, wanting to talk to JB confirm it is him. She apologized twice for the mistake. Guess so. Pulling up his file, she found they did the testosterone test (no change), but not the PSA test. They can't send it back to redo it from the blood they took, but they can use the original requisition for another test. (So she said.)
She got back to us, with a time of 11:45 a.m. for the test. Bearing in mind, after I told her we were unable to contact our GP to get another requisition for the test, she said the lab could use the old one. She'd phoned the local lab manager, and made an appointment.
Off he went for the appointment. JB had cleverly copied his requisition sheet for March. Good thing. They couldn't find his original for the previous test. This time, they had to call in G., and he got the blood in one shot. 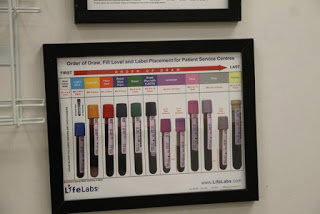 Both of us are a bit shaky. JB kept checking the website. By Tuesday evening, they had posted his file, but not the numbers. Deep breath. Off to bed. It is so frustrating. Unless we know the PSA count, he can't have the Lupron next week.

Dishes done, breakfast had, we were good to go. JB logged into his account. Finally, the results are in, and they are good, no change. It was a challenge. Next week it'll be his injection. At least he won't have to have that in the GP's parking lot in the falling snow! [Lupron injection, April 9] 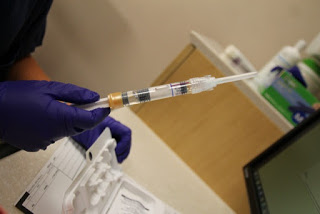 You can see where he began getting Lupron treatments in 2017.

He is wearing his Santa hat these days. 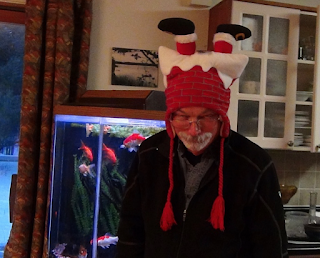 ...it can make hard times harder.

I am glad JB's numbers are good. It is scary going to the doctor's and dentist during these covid times. Take care, have a happy day!

What a rigmarole, but from that chart it sure looks like the treatment works.

We have both a Lifelabs and a Dynacare here, with the latter here first. Not totally happy with Dyna, when Life opened I went there where I received the most brutal jab that I have ever had. So, I am back to Dynacare, which is also closer although nothing is far here.

When I went recently, I had to wait outside for some time before they could take me and others in. I don't blame them entirely as circumstances played havoc with their bookings on that day. Actually, you don't book a specific time, but they have an app which gives you a an approximate wait time, so you have an inkling about when to show up.

Frustrating and so stressful!

You both need a medal and a crown after all that kerfuffle. Life should be easy and stressless.So good there is no change, and thank goodness for some medical appointments that are free.

Live each moment with love,

A ShutterBug Explores,
aka (A Creative Harbor)

Running around in proverbial circles.

I know that there are those, such as myself, avoiding medical offices these days because of Covid. A few weeks back I was clipped by a car mirror- just left a bruise.

At any other time, I'd have gone in for x-rays, but not right now.

Stressful to say the least!
Pleased JB's numbers were good.

Very stressful times, and all of that just added more stress to things.