Mr. Currie published a book in 2009, which I picked up this summer. It was an horrific tale, with 3,000 residents of Carleton and Lanark Counties losing their family farms, creating 8,000 refugees.

I took us on a road trip to check out the extent of the fire.

This fire escapes many citations, since they depended upon newspapers. Currie has done some digging, however. This issue of the time was that the telegraph posts followed the railway lines, and they burned down. Rural, small town newspapers were much of the source of the information for Currie. 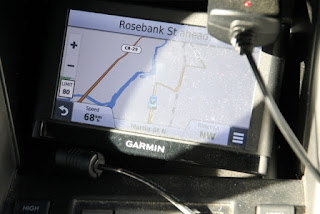 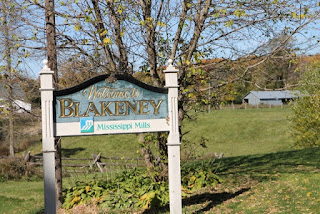 There had been a drought that summer. Railway workers, burning brush from cleared lines near Blakeney between Almonte and Pakenham, lost control of the fire.

The railway line is now closed, the tracks removed, but in 1870 they were an important part of Ontario's infrastructure.  They brought in railway cars with water, but they could not contain the monster. 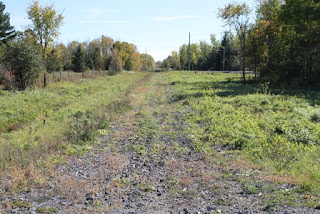 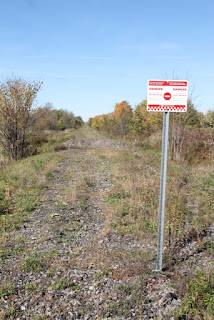 The wind, which reached 100 miles and hour, spread the fire to Nepean and Ottawa, near Wakefield, Que, and south to Westport. The wind chased the fire, and Stittsville was decimated. The fire spread, 'as fast as a horse can trot', and the front was initially 7 miles wide, then had expanded to 11 miles wide in Goulbourn, Stittsville, Bells Corners. It flew across the river, on the Quebec side of the Ottawa River, at the Deschênes Rapids. It circled back around to the south, for miles and miles. No one knew the extent of the fire at the time. 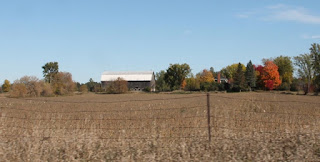 Burnt Lands alvar was created as dried, dead leaves and soil burned away. (More on this in a post #2! It was used as a Communications Bunker during the Cold War, post #3.) 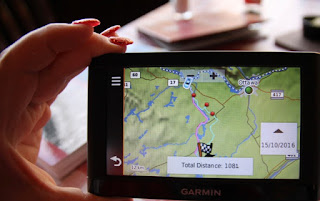 There were 20 deaths, with people hiding out in wells to escape the brutal heat, or running to the rivers. Several people ran back for precious heirlooms, only to lose their lives. Such a tragic loss of life, as well as stock and livelihoods. They found several dead bears, and many wild animals wouldn't have been able to escape.

Ottawa (then known as Bytown) defended itself, workmen dug and breached a part of the St. Louis dam, on the north of Dow's Lake near the burning forests of the (now) Experimental Farm, flooding Preston Street to halt the fire. Fire fighting was pretty rudimentary in 1870. 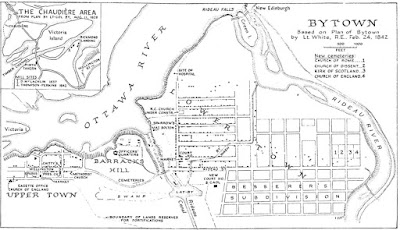 The fire burned from Aug. 17th until late September. It continued in spots for up to a year, emerging in winter in wisps of steam.

Ottawa city council, after some debate, gave $5,000 to victims. As they said, there was much money around, thanks to the prosperous Ottawa Valley timber trade. Lumber barons were sitting on piles of money and lumber (which they were reluctant to move out of the city). It added to the risk as it was highly combustible.
The provincial government gave loans at 2% above prime. Those who lost everything didn't have any collateral, it only applied to those with animals who were still alive.
The federal government (Canada was official in 1867) finally coughed up $50,000 for the fire victims. It was a precedent for the feds, and financial disaster relief is now part of Canadian practice.

As we drove the region, it was incredible to understand the distance, power and size the fire. Some parts of the farmlands were still viable, and farms have since been rebuilt. 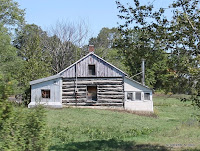 
THE SCENES OF THE FIRE

Wherever the devouring fire has made its march of devastation, the country is turned in one vast blackened, burned, dismal looking field. Farmers can scarcely tell where their property lies, the division lines, the fences, being in ashes. Horses and cattle are wandering in promiscuous flocks over the country, vainly seeking food where not even a green twig is to be seen. ... The fire has had so ruinous an effect even upon the wealthiest of farmers that four or five years hard and continuous labor will be necessary to repair the damage alone, as to retrieving the loss we are not overestimating the time required by putting it- at 20 years.— Times.

In the neighborhood of Perth there has been numerous fires, and many people have been rendered homeless. From the neighborhood of Westport, through to Oliver’s Ferry, there have been an irregular tract of country of a great extent, entirely swept by the flames. Near Adam ’s Lake every person have been burned out, in most instances losing their all. and are now homeless.

Colonial Settlers made fortunes off lumber


It’s difficult to gauge how Ottawa would look today had John Rudolphus (J.R.) Booth not settled in Ottawa in the early 1850s.

Booth was also Ottawa’s largest private landowner, and thus property taxpayer, conferring on him considerable clout. When he allowed his great stacks of lumber to encroach on city property and it was demanded that he remove them, Booth threatened to move his business to Rockland or elsewhere.
Booth was also often at odds with the federal government over the amount of sawdust he dumped into the river — so much so that it literally stopped boats, including those going in and out of the Rideau Canal. In 1897, gases built up from sawdust deposits exploded, overturning the boat of a local farmer and killing him, while a couple of years later, engineers of the Alexandra Bridge noted that the massive layer of sunken sawdust — 10 metres thick in some places — made the project more difficult.

A part of local history I'm not familiar with, actually.

Hari OM
Fascinating, if a tad gruesome. Having experienced similar fire conditions in OZ, can well imagine the horror of this. YAM xx

That fire is a piece of my local history I didn't even know about, Jennifer. What a disaster! Thanks for that lesson.

Good info. Blakey is a great spot. I didn't know of this history.

Almost any place has a big, destructive fire in its past. My Mom used to warn us of living close to waters (flooding) and forests (fire).Nowadays, the intensity of such disasters is such that they 'go after' you even if you're not close to them.

It sounds like fort MacMurray this year when a wild fire got out of control.

That was quite the fire! Hard to believe that it covered such a large area.

So sad and a huge fear of mine!

Lovely shots, but a terrible story about the fire.