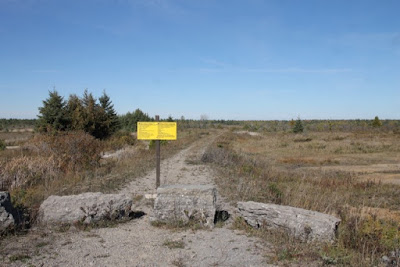 I've been doing some reading. Part of the Great Fire of 1870 included much devastation and destruction. Another consequence was the creation of an alvar near Almonte.

It was created when up to a metre of dirt burned off in the fire, right down to the limestone. Studies have pegged the temperatures of such fires of between 250˚ and 700˚ C. It rendered former subsistence farm lands useless for farming. Others recovered, as they were covered in crops.

[Lest you think the end of my saga, next post I shall add to the discoveries. It was a NATO  Communications Bunker during the Cold War, post #3.), and has been terribly abused by civilian vehicles.] 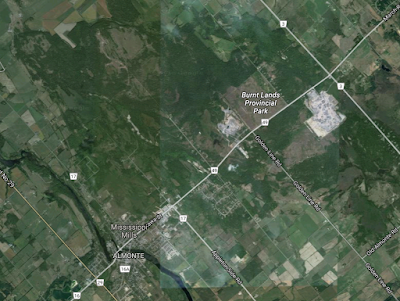 An alvar is a biological environment based on a limestone plain with thin or no soil and, as a result, sparse grassland vegetation. Often flooded in the spring, and affected by drought in midsummer, alvars support a distinctive group of prairie-like plants.

The provincial park is host to some fairly unique, and the ubiquitous, fora and fauna. 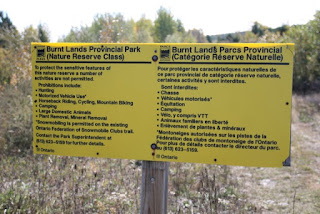 Includes some common sights: bulrushes (now dry and brown), a mixed forest, small trees, scrub, wild aster, as well as the less common ones. It's been well-studied.
Found nowhere else in the county are: 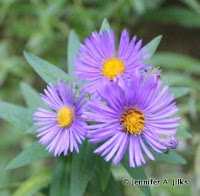 The characteristic of an alvar is the abundance of water in spring melt, and then the dryness over a long, hot summer. We've had some recent rains, after a summer of drought, and I found a spot where water had accumulated. There were quite a few birds, sounding and looking a bit like goldfinches, but I wasn't sure.

The Milltown News surveyed Burnt Lands Alvar.  Some of the trees survived. I've been trying to figure out if our property was involved, as well. We have some of the same forest scene: large trees, burned out, and a fairly young number of trees. I shall never know!

The cedar trees, in 1870, were quite dry with the drought and the oils helped fuel their destruction in the region. Our forest should be much thicker and untouched, even sitting atop a limestone plateau, surrounded by clay wetland. I suspect our forest was hit, too. Here are some examples from our forest. 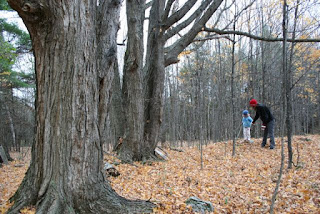 This alvar is one of the best examples of this habitat type in Lanark County, and in southern Ontario. It has been the subject of numerous scientific studies.[3][4][5][6][7][8] Because of its significance, The Ontario Ministry of Natural Resources has designated ca 1,500 acres of the alvar as an Area of Natural and Scientific Interest.

The Lanark County portion of the alvar is mostly private land; however, there is a large block of Public Land beyond the travelled portion of the east side of Ramsay Concession 12. There is also some access along township roads, such as Golden Line Road, and along unused road allowances, such as the north ends of Ramsay Concessions 11A and 12. On the Ottawa (east) side of Golden Line Road, a large area on both sides of March Road (County Road 49) is Public Land and is quite accessible to hikers.

A great post and very interesting to learn about this area. Thanks Jenn!

Hari OM
this is really interesting stuff Jenn - it is always a wonder how nature fills its own gaps with differing habitat which holds another validity... YAM xx

I can't recall hearing of this provincial park before.

We have to be careful with our environment. Drastic changes can last for many years. I remember driving through the devastated area several years after the major fire in Yellowstone National Park. There was little evidence of regrowth by then. - Margy

Hello!:) The Alvar is surprisingly green considering the land has so little soil. An amazing park with it's own identity, where plants and creatures seem to do well in this kind of environment. I like your shots of the foot prints, and many thanks for this informative post.