The Army was in Town: Operation Tomahawk

Sadly, Cultural Misappropriation with its name of this project. They were in town to conduct training exercises.

They are from 2 Royal Horse Artillery (2 RCHA) from Garrison Petawawa from Oct. 11 – 14. There weren't any horses involved, however!

I only realized later that JB's 2nd cousin's husband was part of the exercise. He is a Sargent and we attended his wedding a couple of years ago!

They were headquartered in the Perth Fairgrounds, and they did training, also in surrounding Carleton Place and Lombardy.

After they were done, busses showed up to take the troops home, and some were deployed to Market Square in Perth on Friday afternoon to do some Community Engagement.

We spotted the military in Carleton Place. Thankfully, the local media have been good about explaining the exercise. 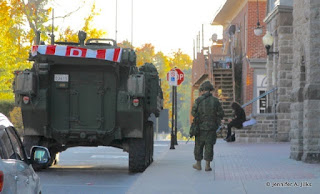 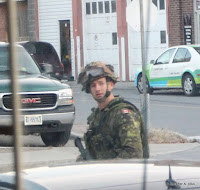 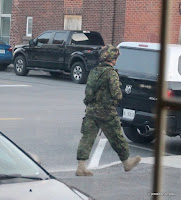 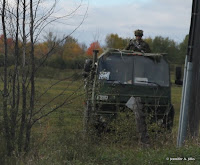 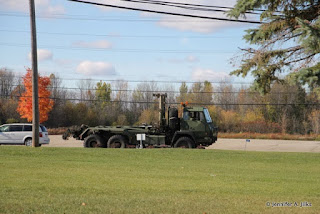 After they were done, on Friday afternoon, the busses came to take them back to Petewawa.

These soldiers had woken up to a cold -4 C. Friday morning, in a dusty arena in a tent. It was a long week. They were affable and keen to talk. Lots of people were quite keen. They offered to let us get up onto the Lav-6, but we declined! We shook their hands and thanked them for their service. Rumour has it, they are off to Latvia soon.

We saw the new Light Armed Vehicle (LAV)-6s, worth $1.5 million apiece. They replaced the LAV-3s, and are excellent upgrades. They hold 6 soldiers.

The Light Armoured Vehicle (LAV) is a relatively-well protected, all‑weather vehicle that can be used on most types of terrain. The vehicle can ford hard-bottomed bodies of water to a depth of 1.5 metres. Capable of speeds of up to 100 km per hour on roads. 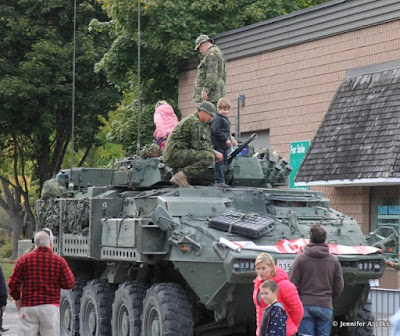 
The M777 lightweight 155-mm towed howitzer is lighter and smaller, yet more powerful than any gun of its kind. The M777 weighs 9200 pounds compared to the M109 Howitzer at 49,940 pounds, making it highly mobile and easily transportable by C130 aircraft, helicopter or a truck of at least 2.5 tonnes. 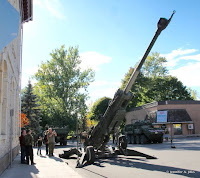 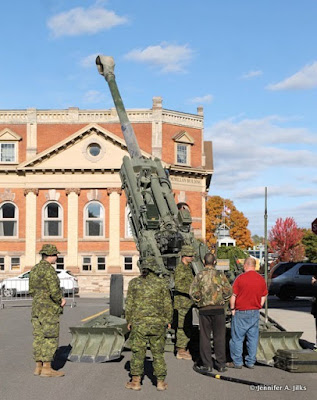 They have new technology: which fits into a backpack. The UAV was amazing. They showed us video from where they used it in Petawawa. 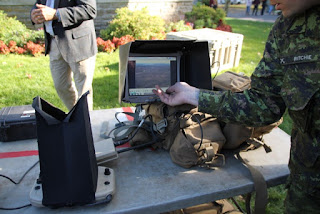 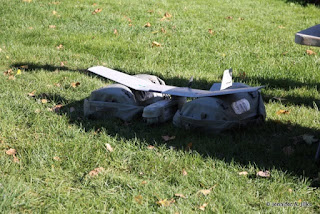 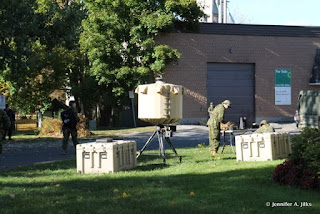 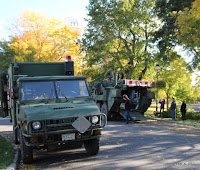 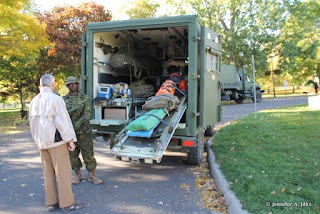 Hari OM
Always good to see the lads in their work and get to know a bit more about the nitty-gritty... have been trying to think if the Australian Army is prone to using Aboriginal names for actions; I don't recall any. ...Just did a wee search out of curiosty. Oz Army News indicates that exercises have quite peculiar but not potentially offensive names. Quite clever in fact; "Pandaroo" for the joint maneuvers with China. LOL...
YAM xx

It's possible this is some of the same gear that was here for Army Run weekend in September. I did get up on top of a LAV. It is an impressive piece of equipment.

They brought their toys to show you. How long would the 1.5 million dollar toys last in a battle? So my point is they look good but how good are they?