The gift of the Magi

Now, most of us in Muskoka have pets. They tend to be rather amusing at the best of times. I remember one year putting the tree in the playpen for safety.

With family and friends around, space is at a premium.

This year, the creche scene is up. Finished one year (1992?), on Christmas Eve. I made a video of the story, onceuponatime.
One year...the year before we moved to Muskoka, there were issues.

The shepherds, no longer abiding in the fields.

The Magi arrived with their gifts.

But later that day,
someone knocked one faithful shepherd flat.

This one took a header on the manger.
He needed stitches.

Mary was slapped silly. Quick reflexes, by a nearby Persian, caught her. But what a scene.
After picked themselves up they wondered: "Who could have been responsible for it all?
"Last year Max, the other cat, ate the last sheep.", said a king.

"Two years before it was Sable!" said a shepherd. 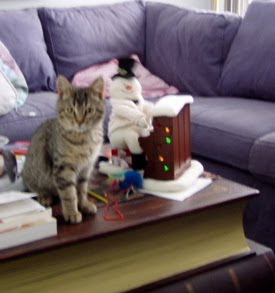 "Who me?", said Sady-the-Innocent, -new to the flock. Sitting beside her friend Frosty, who might also need a quick cuff...

The angel's light shone down. I will be a good girl, she promised.

We've had critter-criche conflicts ourselves. Funny.

Merry Christmas to you and your family!

Sady looks so inocent to have caused such bedlamb. It's a cute nativity set.

Aren't they all too sweet? Thanks, you made me chuckle!

Jenn: They certainly are having a tough time in that Christmas story.

That nativity is really wonderful--and fun and tough.

I've had cats for many years. Each one has had different ways of handling Christmas. One year a very rambunctious kitten took a flying leap at our Christmas tree and sent it crashing across the room. He found this to be such fun that it was repeated several times. I finally gave up and put the tree away right after Christmas. But who can stay mad at a cute kitten. - Margy