It's been a lovely few days, other than the frost on Monday morning! It was -2 at 6:30 when I got up. It was a balmy -1 by 8 a.m. Oh for joy! This morning I woke at 5 a.m., worrying about this proposed gun club,  and it was 0˚ C.! We have done some research, and are speaking to neighbours, similarly upset with this proposal, and we'll see what happens.

I put the heater into the bird bath, later I'll switch it out. (Thanks, AC!) Both that and the water fountain had a skiff of ice on top. Whoopsie! With all our worries it crept up on me. Soon I'll drain, clean, and cover the water fountain. 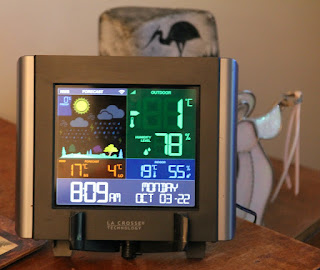 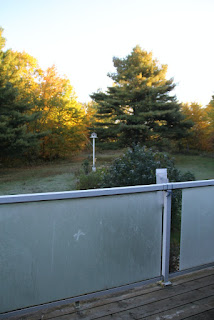 Despite wearing a mask in her high school, Josephine has COVID. She's not feeling too badly, which is a relief. Caitlin thought that last year the mask/no mask ratio was about 80/20. This year it is reversed, only about 20% of kids wearing masks. Thanksgiving (Oct. 10th) will be postponed. Ah well. We had a Merry Christmas on a weekend in late February/March in 2022! What the heck.

Poking my head out front, I noticed the tops of these trees. It cheers me up. 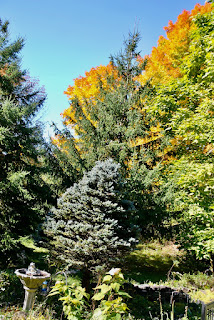 I walked out front to see the colours better! 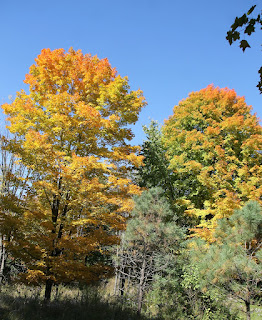 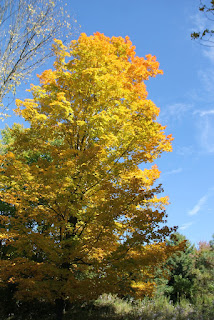 I've loved the sumac in Ontario. This frontyard stand is dying out, as is the one in the backyard. 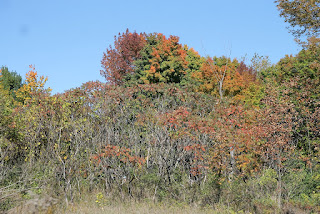 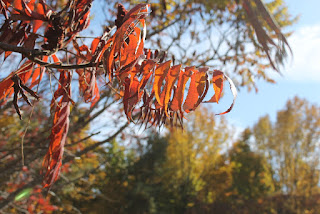 Well, here we are in the great outdoors. There were three bees on my chair. They are a bit dopey. The hornets are still about. It'll be interesting to see when they die of for winter. 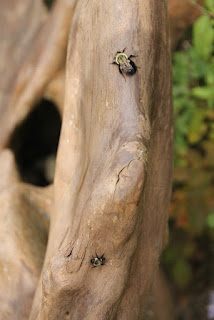 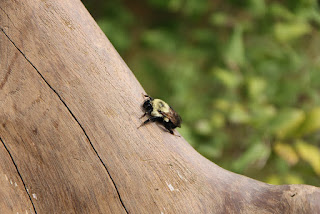 My planters aren't exactly going strong, the coleus was hit by frost, but just in the front. We've a bit of a micro climate, in that the house retains the warmth of the sun. The lantana looks fine, as well as the trumpet flower and the petunias. The impatience was touched, though. It's just a matter of time! 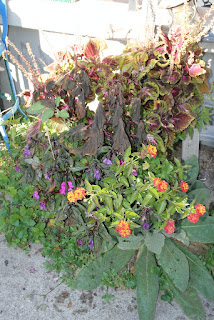 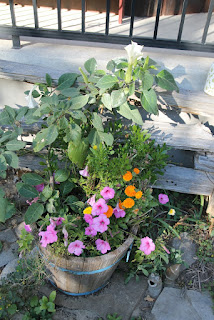 Funny story – don’t tell the kids! JB brought me some flowers to cheer me up. I found the kitchen shears and chopped off the ends. Then, I used the shears to chop off some old cactus leaves. Then, I lost the the shears! I looked everywhere where I'd just used them.

I was out fetching chestnuts, and found them under the horse chestnut tree! 👀
This is what the tree looks like in spring. The leaves are dying, the conkers are dropping off as well. 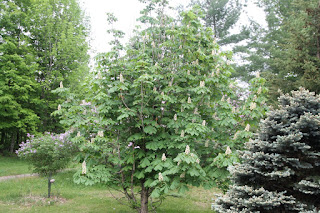 I love the horse chestnuts. We had a tree beside us when I was a kid in Toronto. I gathered them and opened them up. 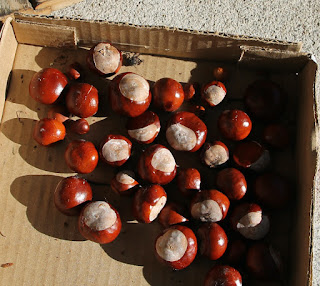 Indoors, we are settling in for winter. The orchid is doing really well. 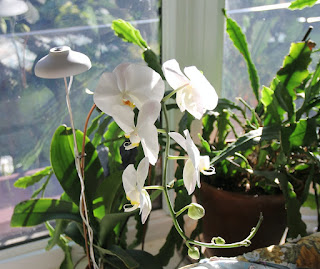 This works for some cats, but not ours. Try it, if you have a cat. Some cats perceive it as a box. 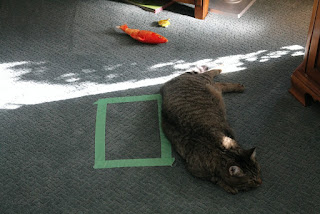 My poor computer cord! Daisy used to like it. I repaired it twice since. I had a package of white, but it was stale. It's not a cheap fix: $16.50 for three little packets, but cheaper than a new computer cord. With supply chain issues, we could only find black in the store. 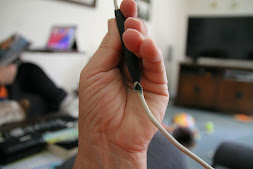 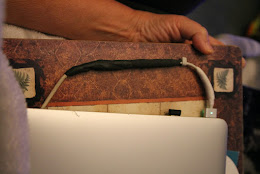 The aquarium is doing well. I think goldfish day is Wednesday, maybe Thursday. After that the temperatures are just too cold. I have to drain it some the reach all the goldfish, and the rain Friday will fill up back up some. 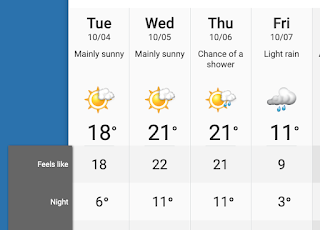 Hari OM
We have already been at your 'Friday Temps' for a week now. And damp, damp, damp. I suspect our colouration will be very shortlived as the are whipped away before they can set properly... So thanks for your lovely images! YAM xx

Hello Jennifer,
Currently the days are very wonderful with a good temperature.
The colors of the leaves on the trees are so nice. Enjoy of this time of the year.

I hope you can stop the gun club -- I'd be very uncomfortable and upset with that. I'm glad you have neighbors on your side; they may find it just easier to build it in a different place. I'm so sorry about Josephine -- glad she isn't sicker but still, hate to see anyone ill with this at all. Meanwhile, all your photos are lovely -- great color up there!

So sorry to hear about the gun club. As usual, follow the money. Get the neighbour organised and beat the hell out those selfish shooters.

...every year it follows autumn!

It's still warm here, but temps are supposed to dip tomorrow. Not as low as yours, but still.

Sorry to read about Josephine. I hope she is well soon. It looks very autumn in your world right now, even if winter is on its way. I'm loving this time of year. Glad to see you have a plan to get the fish in before they freeze.

I always enjoy seeing the colors you have waaaay before us...as well as your cool air that's enough to bite the fragile plants. I commented just the other day that I'm not seeing Sumac around. We thought perhaps the park people decided it was dangerous and killed it out. Mmm. I do hope that you can get the gun club far away from you. Do you have the ear of any of the zoning people that make the decisions? Talk to someone at city hall if you can. Hey, it's election season here, are people running for office there also, that can be prompted to keep gun clubs out of your area? Just a thought. Hope your grand feels better soon, and all the family doesn't catch it either.

Hello,
The trees are looking beautiful, love the colorful leaves. It is chilly here, lots of rain and temps in the 40's. Take care, enjoy your day!

Those tree tops are beautiful. Guess the pond will take priority over all else as your temperatures drop.Wednesday morning here, 5.30 a.m. was hoping to get the road snow warning updates but nothing till later on.Down south family are making their way home after house sitting closer up north, just 3 hours from us, instead of either a long drive, ferry crossing and longer drive, or a flight with one stop on the way.Gone are the days when all families lived within a pony ride !!!

As I type it is 9C and cloudy. Your winter is coming and so is our Spring.
Love your autumnal colours.

I have seen a few beautiful trees in the last few days but I hate that it means that winter is coming.
I hope you can sort something out with the gun club as it isn't nice to be wandering in your own forest and to hear guns going off.

Do you have to tell me winter is coming? You just had to spoil my day. Yes, I know you are telling me what has to be done to prepare for winter and prepare we must do.

Hi Jenn .. I'm sorry about the covid hitting .. we have been so lucky I worry our luck will run out soon ... we had three nights of frost warning .. it was bit cool in the house I have to say .. hubby turned the fireplace on .. of course the girls love that ! .. OMG ... if anyone knew how often I set my pruners down and then can not find them ? .. I'd be carted away ! You are not alone ! LOL

I hope your Grands recovers from Covid with no after effects. We have a Shooting Range across the lake, we hear them but it doesn't cause any problems...it has earth berms :)

I'm doing the slow emptying of annual pots before a heavy frost which will make in a messy job. I remember collecting chestnuts as a kid, nice that you have one in your garden. Do you roast them to eat?

Beautiful fall colours. Good that you found the shears before winter.

Good luck with stopping the Gun Club. If they are breaking the law, one hopes there is recourse and also hopes that will be held against them. The gun lobby is so powerful here that we would have no chance at all, though in a sense our whole country is a shooting range.

Glad it is being put to use, and good luck with the gun club situation.

I'm sorry about your Covid news and hope she recovers quickly and completely. I'm still wearing a mask, but it seems most people aren't.

Y'all are well ahead of us in terms of seasonal temps and colors. Gorgeous trees!