🍄 Who murdered my Mushrooms?

It's the season for them. Wee Isabelle was fascinated with this one growing out of the dead elm root. She is now in Gr. 7! We had so many surprises when we moved here Sept. 15th, 2010. 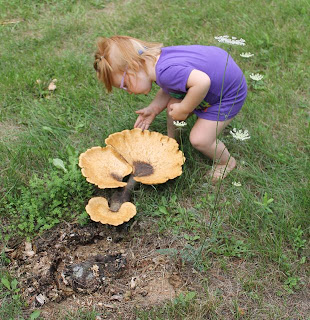 We've had lovely warmer days, and cool, damp nights. I've been out walking in the forest, and try to vary my path. I noticed, however, I missed the new ones. Then I tried to do my regular walk in reverse order. That way I notice new ones.
Caitlin phoned, and we got caught up with our respective weeks. I told her we had 'a mushroom murder.' I had to explain, I think it was the raccoons! 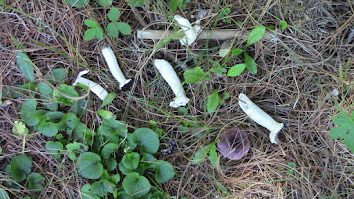 Cinnamon and I had a lovely walk at the beginning of September. Daisy and I went walkies in September, 2013 and found a lot of mushrooms. I've since been gathering photos, as I don't want to gather the real things!
The mosses are a bright green, there are still leaves in the canopy. 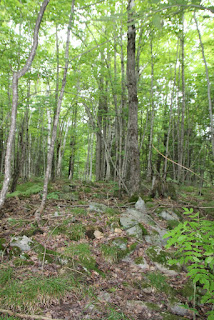 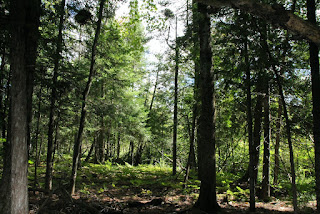 🍄 The wet and the cool weather are fungi's friends. We've so many, but most are white, brown, or off-white. As September got cooler and wetter, more grew. Mostly they are beige or off-white, but there are some colours, as well as some bright white ones. They stand out in the forest. Some fold up and gather the rain. Others nestle at the base of trees.
I've tried to identify them over the years, but I find I don't remember their names anyway! 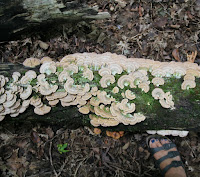 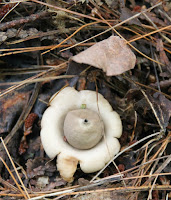 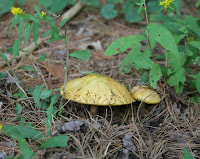 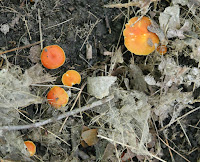 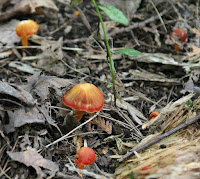 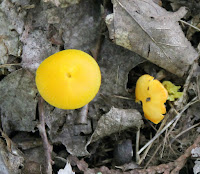 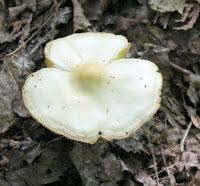 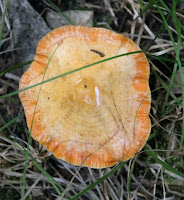 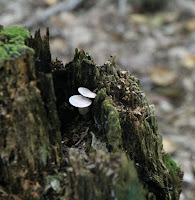 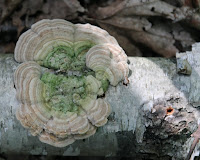 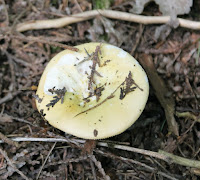 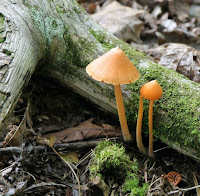 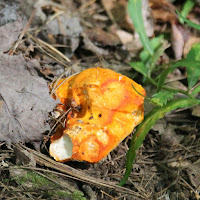 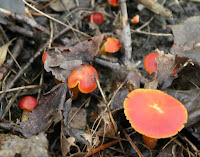 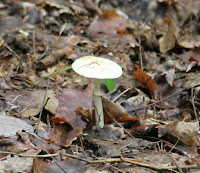 These showed up on the fallen maple tree. They look like coral, bright white on the darkened log. I went back on a cloudy day and used the flash. I love the puffballs! This is a teeny one under the pine tree out back. I've seen a couple the size of a football (2012), but not recently! 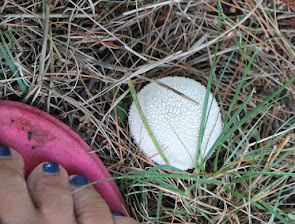 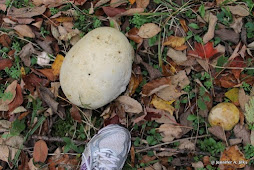 The yellow/orange ones appeared Sept. 2021. I think they are my favourite! Amanita muscaria var. guessowii, commonly known as the American yellow fly agaric. 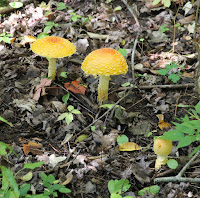 This one looked promising. Sadly, it had been eaten or uprooted when I went back! It is a wonderful time of year. In cottage country we call them the shoulder seasons, as the bugs and tourists are mostly gone.
Posted by Jenn Jilks at 06:52

...I don't know the name of mushrooms, but I enjoy seeing them. You found many that I've never seen before.

Great collection of shrooms...and I'm with you in forgetting their names very quickly. I buy mine at the store. Which reminds me, a pint is waiting for a good soup or stew!

You have lots of wild critters AND a jillion types of mushrooms. The bright orange ones are amazing. (Didn't see any peyote mushrooms; I think those are red with white spots and hallucinagenic, "dangerously misspelled. Linda in Kansas

So many lovely mushrooms you found.

Beautiful things. Thank you for showing us the range that grow near you.

Thank you, Jenn! Mushrooms are the coming things in so many realms. There is so much interest in them right now. This is a very timely post. Thank you. Perhaps share it with a local publication in your area?

My daughter had a special fondness for mushrooms when she was little, always watching for them and noticing how many different kinds there are. I still notice :)

funny, that you did this post today. i was working outdoors today and lots of fungus in the yard. funny thing is i don't think the water has been around this year, maybe humidity?? not sure. but i am seeing is new places. learning is fun. thanks, for sharing. i enjoy being curious. have a great week. hoping for rain. we so need it. the ground is looking so dry. we have had some wind. guess due to the hurricanes going on ...i know we need to rain but hope it will be calm rains not rough ones. ( :

You are blessed with mushrooms. We have hardly any this fall. Our Puffballs are only about 1/4 the size of last years and they were not as large as usual. Still looking and waiting for our usual Amanitas.

That's a lovely variety of sizes shapes and colours there. The only mushrooms I ever see are the ones in the supermarkets. White caps, white flats and those big flat brown portobellos.

What a collection! When I started scrolling thru the photos I had no idea that there wold be so many.

Sorry, AC, but I wanted to compare them in a single view! It was over 3 weeks.

I love seeing your huge collection of mushroom photos. I don't know the names either but I love them all. Pity about the decapitated ones, though.