Last week, during the last day of Gramma Camp, Friday was prep day. It was a cold morning, and we eased into the day.

Caitlin's birthday is August 16th. On the last day of Gramma Camp, Friday, we did a lot of preparation. Grampa bought Josephine and Isabelle some blank cards and they painted them. 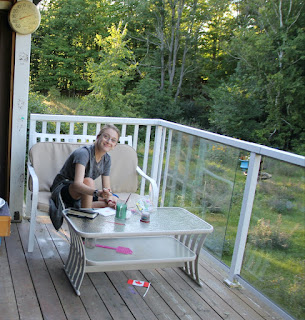 Carrot cake was iced by both girls. There was some trouble with a large cake decorator tip and too much icing. We even popped it into the microwave for 10 seconds. Hilarity ensued. 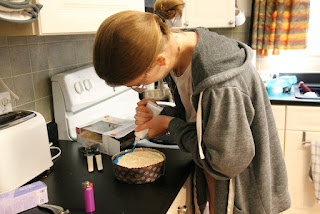 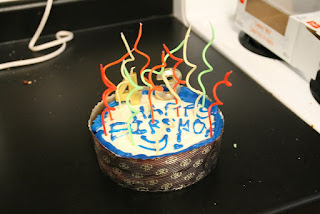 Cake and presents hidden, the parental unit arrived after work, and dinner prep was begun. Chicken, carrots and broccoli on the BBQ. Caitlin and I prepped the veggies, JL did the cooking. Grampa and the girls had bought the cake. We're a team!
Isabelle finished her Diamond Dotz cat. She had begun it in July 2020 [A walkabout and a sit], but during the school year, and our weeks of Virtual School, it was put to the side and only brought out from time-to-time. I found a place for it in the living room during last week, Week 36 of Gramma Camp, and she picked at it. She finished after such a long time, and we took a photo of the finale. 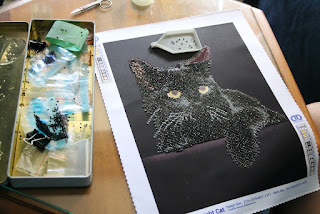 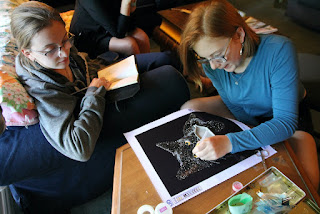 We found some old metallic balloons, I blew them up with the pool pump, and we hung them in the window. 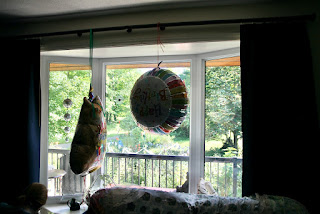 We had the pre-birthday party Friday, August 12th, although the 16th is the day. JB and the girls had gone into town and ordered a cheese basket from a local store. Isabelle had done a painting, for which I had found a frame. 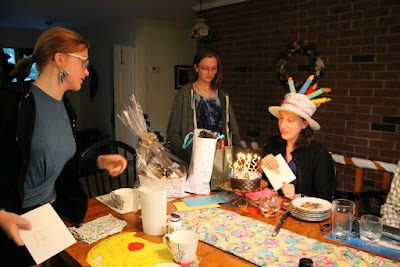 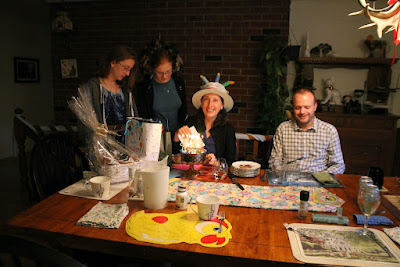 Saturday morning, it was an early one – 7 a.m. alarms. Jos had to pick up a friend, and then drive to another friend's house. From there a friend's family was taking the girl pals to their cottage for an overnighter.
Jos ate breakfast on the back deck, it was 10 C., and I spotted a tree frog on the deck's plexiglass. It gives an amazing image of it's yellow legs. It was cold. 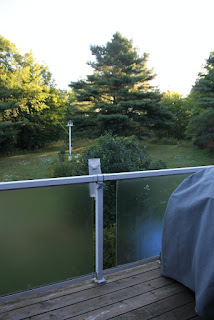 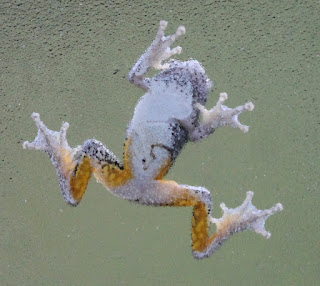 Isabelle went over to it later, touched it and it flew off the 2nd story railing into the hops leaves. It turned up later. 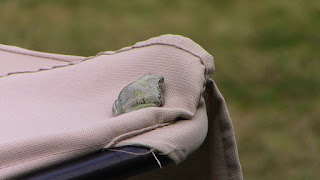 The grandies will return on Monday, Aug. 22nd after an appointment Isabelle has, and spend week 37 with us!
Posted by Jenn Jilks at 06:59

...Happy Birthday, I love the candles.

Happy Birthday Caitlin. Love that frog - and the gorgeous view it gave you.

Such a nice celebration. Your girls are so talented and sweet. Beautiful as well.

Yay and happy birthday to Caitlin, born the same day as my son Russ...though probably years apart. He's in his (ahem) 50s. Aren't families the greatest!

A wonderful time for everyone.

Caitlin, many wonderful birthday wishes from down here. What a time together, that is the best memory. That cold frog, maybe almost frozen there.

Yes. You, JB , and the girls are a team.
Happy Birthday to Caitlin!

Happy birthday to her!

Happy belated birthday to Catlin. That Diamond Dotz cat is absolutely amazing. Isabelle can be proud of her accomplishment.

Loved the candles and the cake decorations.