In the early morning, Grampa went walkies. I did not. About 9:30 I checked on the girls. They were stirring. There was breakfast, reading, and some artwork. An overcast day all day. 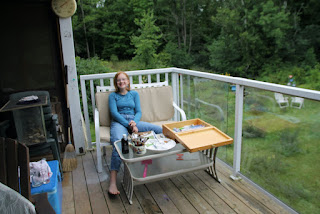 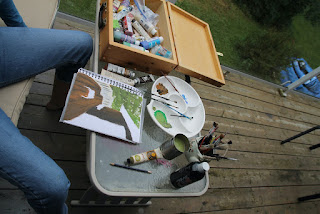 Isabelle did Dazzle Dotz. Jos was on the back deck sketching. 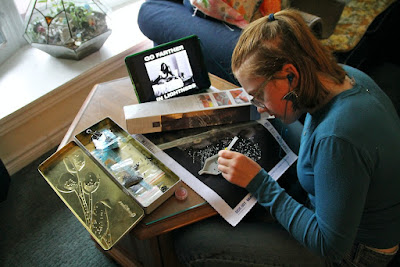 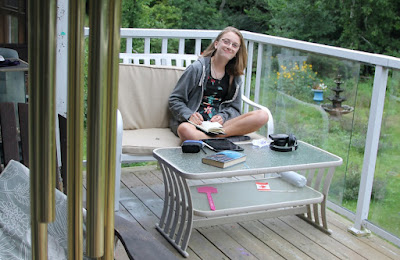 They went shopping with grampa. There was NO ground beef for meatloaf at the store, or bacon, only ground pork. Poor Grampa went back into town to the butcher and brought home both.
While they were occupied, I worked on some weeds. Also, the pond pump, which was working after it cooled off. It must have overheated.
I have lost the top of the protective box (on the right in the photo, below), however, in the bottom of the mud and dead leaves in the pond. I fetched a towel, lay on my stomach, and fished around in the bottom. I couldn't find it. I was using a trailcam buckle to keep it together and I should have kept using it! I will look for it later. 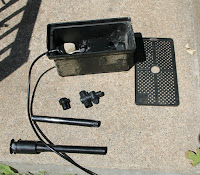 I decided to pull out the fridges and clean them. Having cleaned the top, then the sides. It was a bit of how one thing leads to another. You know how that goes. I ended up having to clean behind them. 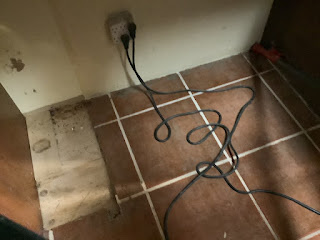 Gramma's famous meatloaf was had for dinner, with fruit pies for dessert. This was followed by running the dishwasher, and the end of Ghostbusters, and two young ladies had showers!

We had lots of great chats about school, Isabelle goes into gr. 7, and Josephine gr. 10.

...camp would not be complete without art time.

You certainly were industrious to do the whole fridge, inside and out, behind even! Congrats!

I love Gramma camp! Just wish I was closer. However, at my house of unclean, I never have to worry about one cleaning project leading to another.

You are creating lifetime memories!

It really is like going to camp for the girls.

You never know what you won’t find at the grocery store these days.

Sounds like Gramma Camp is in full swing and lovely photos to go with it. Always enjoyable! I admire you for being able to get on the ground to sift into the pond. I would never be able to get up myself, but I would give our neighbors a good chuckle. Our houses are very close to each other here. A fun read as always Jenn, thank you!

Another wonderful day. I am not going to admit how long it is since I have cleaned behind our fridge.

I have to wait for a tall stronger man to pull out our fridge . What young ladies they are now, and JB, you are SO good to go the extra mile to find the right fillings for meatloaf. Jenn, hope the pump bits get found. Another frost here this morning, but blue skies, even if a bit pale at 7 a.m.

Having young people around, does good to one's soul.

Well done for cleaning behind your fridge.
Sounds like everyone had a good day.

Two times you left a question on my blog. I answered the first time but I guess you did not see it. Here is the answer that I gave for you:

Hi Jenn, On days when I am at home doing my regular walk I have a flower list on the iPhone where I check off as I see things. On days when I am further afield, I take a paper list of flowers seen during the month from past years to make check marks. I just write down the birds that I see and hear as there are a lot fewer of them. Most of the text on the blog is copied direct from my iPhone.

Jenn - as I have written before, I would love to be a participant in Gramma Camp - crafts and good food. What more could you want?

Grandma Camp is going well. I love Ghostbusters. Have you seen the latest one Ghostbusters Afterlife?
I haven't cleaned behind my fridge in years, since I moved in in fact. Because I can't easily move it anymore. in years past and different homes I pulled out fridge and freezer to clean behind and under at least once a year. Here, all I do is swipe under it with a duster on an extension handle to get out the fluff and cat hair, then I spray the duster with Windex and swipe again a few times. Ditto under the washing machine and even then both of them only once or twice a year.

We pulled the fridge out recently and did exactly what you said, cleaned the whole appliance, inside and out and washed the floor too. Not content with that we repeated the performance with the stove. That was just the kitchen. Soon we'll have to tackle the freezer and the downstairs fridge!

I am enjoying Grandma Camp ... I'd like to enroll for next summer (col).

Wow. Pulling out the fridge. You are beyond awesome.