We knew it was coming. We were warned.

It was bad all across southern Ontario. The 400 series highways were a mess. Some spent 8 hours stuck on the 401 in Toronto in various locations. 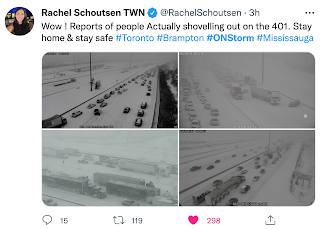 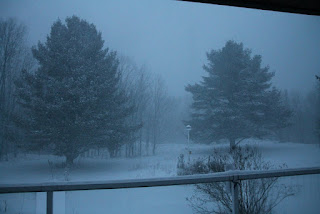 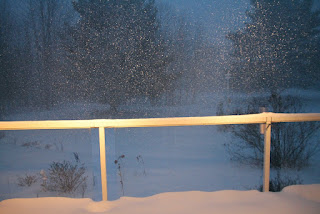 My trusty snowblower. Note the height of the snow compared to the tires. Also note that by the time I went down with it to the end of the 100 m driveway, back to the house, and back down to the road, the lovely black asphalt was covered up. I knew it would be a long haul! 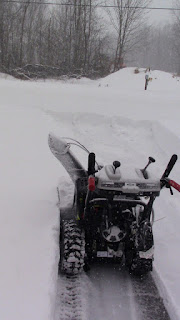 Having made it to the end of the driveway, I admired my crooked, but crisp clean lines! You can see where the snow had fallen on the left side, while I worked my way up and down. 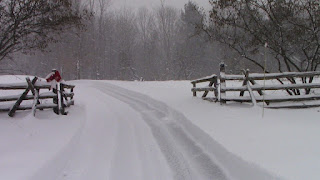 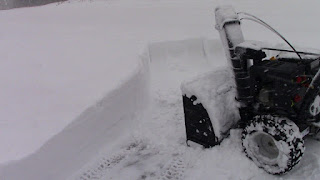 Driveway done, I had to explain to the birds, who hadn't dug out the feeders, that I would do it later. 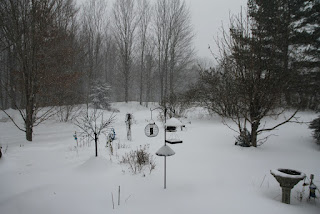 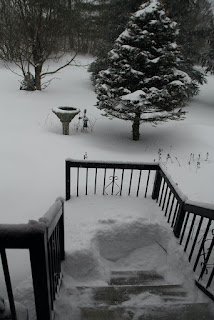 'Later' was after lunch. I took a break. The snow was (I thought) up to the first step. There was a step hidden. If you look down the sidewalk, you can't see where the steps are. I forgot about them. I fell off the step! (How long have we lived here? Since 2010. 😅) 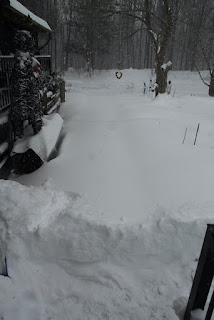 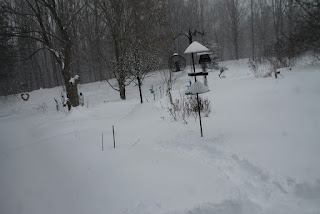 Highway 7 was closed from Kaladar to Perth, and then from Perth to Ottawa! 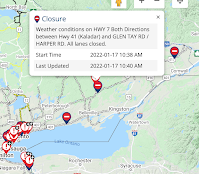 I had to change into a whole new outfit for shovel #2. It's hard work! My coat, pants and scarf were soaked... I threw my poor soaked gloves on the heater vent. They dried out. Almost! 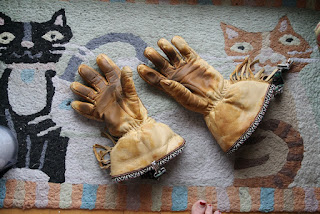 I don't know if you remember the 3 crows who nested in the backyard for the spring. Three crows flew over as I was starting again. They are a Rorschach test, I think! 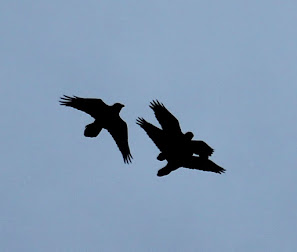 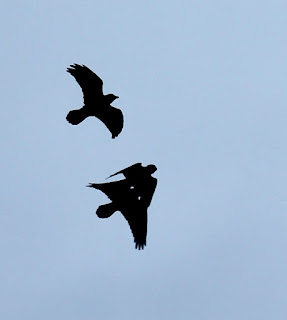 It was a job that required a few breaks. Happily, we've lots of places to put the snow. In the city we used to run out of front lawn for the snow. This afternoon I had help, though. 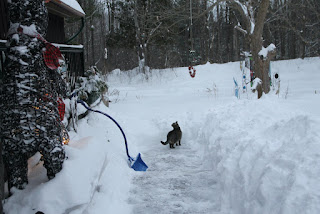 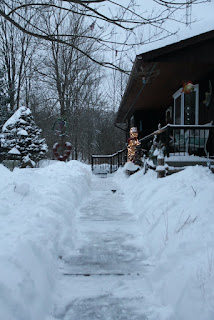 Cinnamon on snow:
Once that was done, an hour and 40 minutes later, I checked out the laneway. Not good. The snowplows had been by. I couldn't face it, though. That will be Tuesday's job. I got rid of a lot of it, though. 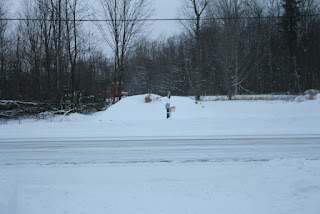 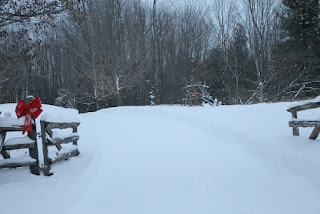 I had just cleared the end of the driveway. I shall have to go back out today. It snowed all day, giving us a total of 45 cm. 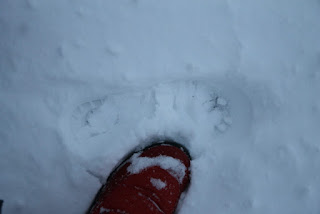 Back up the driveway, they were watching me. They've been around since 3 p.m., when I started shoveling again. I suggested she come help and I might find some food for her, but she declined. 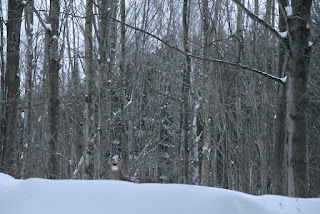 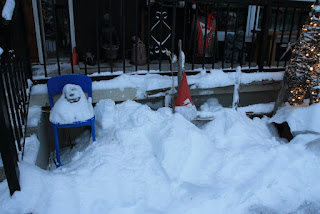 The mourning doves had the right idea. The wind was whipping snow off of the roof, and it was miserable for the little critters. Blowing snow :
Posted by Jenn Jilks at 07:20

It was quite the storm to say the very least.

Great photos, and you really did quite a JOB! Kitty seemed to at least stay on top of all the snow.

Cats are such graceful animals.....


....with the exception of clamouring about in the snow.

We have run out of places to put the snow. I'm hoping the sun melts some of it today.

Some storm. Take it easy on the shoveling. ( Three spelling mistakes in trying to spell shoveling has to be a record for me).

Oh my. We get snow from time to time but NEVER like that. You must have been exhausted. Love your photos and am particularly taken with the birds and the black moggy.

I remember storms like that. Your pictures make me want to make a steamy mug of hot chocolate!

That's a lot of snow!

That is a lot of snow to move!! You are a superwoman!!

You got more than us.