📫Our mailbox was bashed – again

Here we be. The end of the week. Where do the days go?

I had a wee breakdown Wednesday. I discovered that the mailbox was ripped sideways. When you are feeling sad and depressed, or defeated – everything seems worse. I didn't think it was the snowplow, as we haven't had snow in a couple of days. (I phoned the county, to ask if snowplows had been by. No response after my phone call.)

You can see evidence of a strike, it looks like one point of impact. It is discouraging, the violence. There is no reason. No purpose to it but to cause citizens problems, and ruin property. 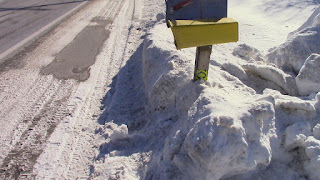 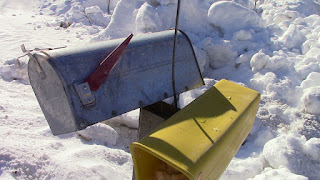 I was so upset. I've had to replace it a couple of times, once it was the snowplow. Another time, a baseball bat. [Maintenance during a lockdown] 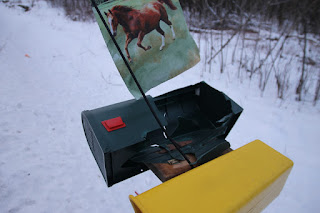 JB went into town for errands. I set to work. It was -14 C., and not the kind of weather you want to be working on the side of the road. That, and my anxiety trigger is noise. The large trucks roar by. Few slow down. 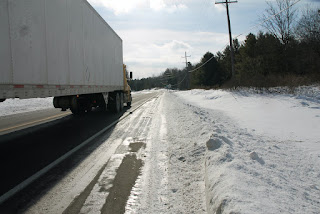 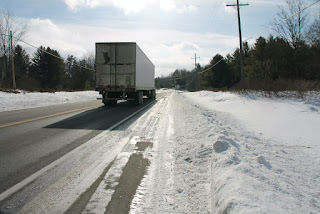 Kind people move over the centre lane in their vehicles, if I'm fetching the mail, barring oncoming traffic. Others speed up, after coming around the corner.
JB went into town and on his way saw that several other mailboxes were smucked, one was gone. That was Wednesday. By Thursday, I was determined to conquer this.
I did a bit of a workout and after I was warmed up, I bundled up and went out to the mailbox. Awake at midnight, I'd planned what I needed to take down the driveway. Removing the box, I thought it was OK to reattach it. The 3" screw had been bent, the other pulled out from the base. I hope the juvenile bastard who did it had a fine jolt and whiplash! 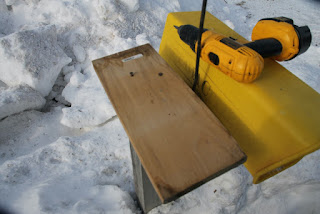 The more I looked at it, the worse it looked. It clearly needed a rivet, but I don't have the right size for it. My drill battery died (at midnight I'd planned on putting in the fresh battery before I began, but I forgot. Sigh. JB'd arrived home, took in the groceries, came back to check in on me and helped by carrying the box. He has one good arm! I had to go back up to the house dragging my tools, just in case I couldn't repair it. 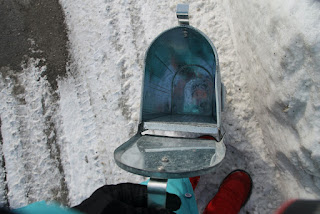 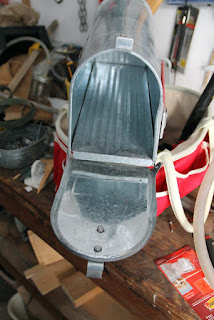 I had to remove the original rivet, as it had been pulled out. Replacing it with a plastic wall anchor and screw, I shall hope for the best. I don't have a rivet or a proper nut and screw that would fit. You can't go to the store and buy just one, either. 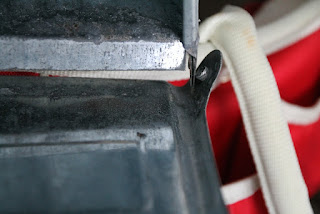 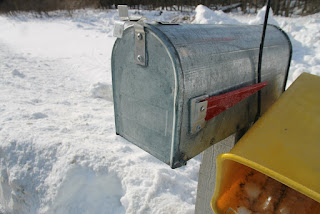 I hammered away at it, to get out the dents, but the door still doesn't fit right. I gave up. I think it'll work, for now. The traffic was horrible, the wind fierce as they flew past me. I had another cry, but it is done to the best of my ability. There is an empty lot behind the mailbox. They were working on burning some brush. 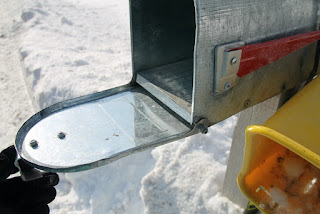 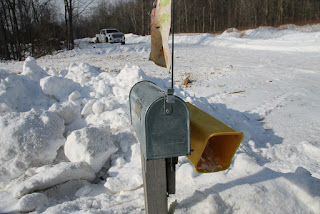 This noise I could hear coming. The engines rev, they prepare to pass slow moving vehicles, and they speed on by in the oncoming lane.
Cold enough for you? The wind was whipping the rainbow flag and the snow about. 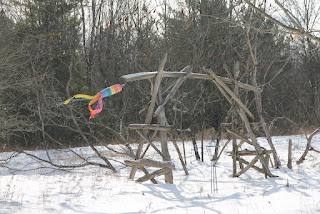 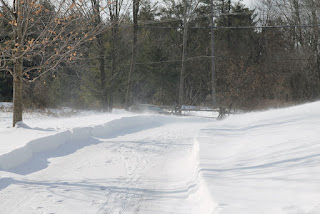 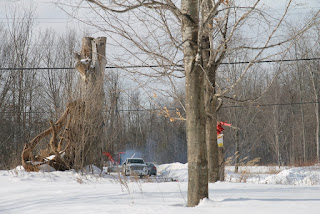 Deep breath, hot shower. Feet up. I've a new toilet paper holder to attach, and the dustbuster has fallen off the wall in the pantry. Maybe I'll think about that today. I'm horrid using wall anchors. Hubby nuked me some premade dinner, and I calmed down. We watched The Repair Shop, and I hoped for some tips.
I've more snow to shovel, and the bunnies have been busy in the yard in the dark. Of course, it helps if you turn the camera on before leaving it out for the night.
Happy weekend. I hope things are quiet for you!
Posted by Jenn Jilks at 06:55

Sounds like a perfectly BAD day. Hope the shower and feet up helped and hope the weekend is better.

Not fun at any time, but even wore in tis cold weather. You call the miscreants “bash turds” if you like.

Do they make rubber boxes on flexible polls?

Of course it was juvenile delinquents. When more than one box is damaged, it's going to be them.

Ideally one of them cut their hand open somewhere along the way.

Geez Jenn...I don't understand that type of violence either. What makes these idiots think it's fun to destroy a person's property? As a kid I never thought of doing something like that ever. You did a good job repairing it though! Those cars, that would worry me every time I was out near the road. I hope you're doing okay! ♥♥

So sorry about the vandalism, Jennifer. Had the same problem myself years ago. Other boxes in my neighbourhood would be hit at the same time. I even used a Post office box for a while. Then I bought a big rubberized mail box which so far has remained intact. I think people who don't respect the property of others don't respect themselves either. Sad stuff.

Hari OM
So not an accidental skid - someone actually does this for kicks??? Bummer. You are quite the handywoman though! YAM xx

You certainly have handywoman skills. My hat is off to you. Deep breath.

Some people cannot resist having a go at anything. Meanwhile, watch that tennis final this weekend, Guess who I really want to win the men's, and the women's????? On court drama, racquet smashing. I had thought their gear would be a lot more expensive than it really is, my old racquet way back in the 1950's had a wooden frame, and a wooden press with wing nuts to stop it warping during the week!!! Keep warm Jenn, don't get too stressed by silly antics, I knw a mail box is a very essential item, don't leave your trail cam anywhere near there in case it goes missing!!!

I find that it feels like a personal attack when someone vandalizes something like that. I have a big planter out front and most summers someone will steal flowers and it really rattles me that they could do such a thing. Or someone tags the side of our brick building and it takes hours to clean off. You did well - just keep fighting back.

That happens up north a lot -- we discover it when we arrive in May. I'm so sorry.

Yes sometimes it does indeed feel like that. There will always be juvenile fools, in fact many of us were they. You just keep living your beautiful life and taking care of your wildlife Kingdom. You're doing beautifully

Good Grief! That's a lot of steps to fixing that mailbox in Artic temps. My arthritic hand just froze reading about it! I've seen some folks build a brick unit around their mailbox. Maybe you need two more trailcams to catch evil creatures coming, hitting, and recording a license plate number. Be careful! Linda in Kansas

Hi Jenn, I have the worst trouble with your blog posts cutting out on me, so if I'm not commenting that's why.

I am SO sorry I haven't been here in awhile. I felt SO incredibly sorry for you as you tried to repair that mailbox, while fighting the noisy traffic. And doing it all in the freezing cold, too. You have more gumption than I, that's for sure. Thankfully, my mailbox is attached to the side of my house. It sounds like you repaired it the best way possible and I am VERY proud of you, Jenn.

Some days might be better spent in bed. No, I don't do that either; I just think about it. Glad you made it through the day!

"Some days you can't win for losin!" That doesn't male much sense but I do realize that there are times when things are just too much. Have a better day tomorrow.