I managed to remember that I wanted to clean out and tidy the linen cupboard, and then to find the will to do it. My attention span is not great these days, nor my motivation! I was looking for a particular pillow case, after I'd changed sheets, but I didn't find it! The space looks pretty good, though. For now! 😹

The walking is still tragic outside. A layer of ice lies on top of the snow cover. Indoor chores and exercise are a better option. I love the fresh air. I'll go out and refill feeders wearing my cleats, and penguin-walk back indoors.

We've been having fun with TV in the evening. We are watching CBC's Arctic Vets. Assiniboine Park Conservancy and the zoo are an amazing example of people helping animals. They only keep the animals if they cannot be released. They released an eagle who was experiencing electrocution symptoms one episode. Male and female vets, they are wonderful role models. They love the animals, know them well, and are committed to keeping them as healthy and happy as possible.

They have 9 unreleasable polar bears, trained to mark positions. This way, the keeper calls out 'mark' and holds her hand up high (they are big bears!), they can administer booster shots of annual meds, as well as antibiotics, if necessary. It allows them to visually inspect the beasts, as well. Sometimes, they have to do procedures, and they bring them in and dart them. 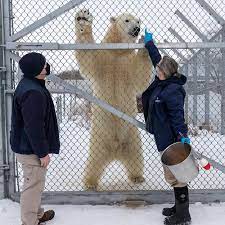 Polar bears are a big problem in Churchill, Manitoba. They wander into town and cause trouble looking for food. With Global Warming the ice they need on which to hunt seals has been precarious. They've come up with a strategy to keep them out of town. A park ranger looks for them, and uses truck horns and sirens to send them around town. Sometimes, a cub is orphaned, and they take them in. This provides great opportunities to do research. Two biologists are experimenting with a photographic computer program to identify individual bears.

In one show, they feature a seal, taken in from a German breeding program that didn't have any where else to put him. All their rescue seals are males, and they train them both to provide healthcare, and to keep them busy during mating season.

In Canada, watch any time on CBC Gem! Download the CBC Gem app from iTunes or Google Play, or watch in your browser. Season one of Arctic Vets is now streaming in the US on National Geographic and internationally on Roku!

Cinnamon jumped up on my lap during the show, and he was fascinated with the seals (big fishies!) as well as the polar bears (bear, Cinn!)! JB can see his face, and Cinnamon turned around to watch them. The paw of the polar bears can be 30 cm (12") wide. 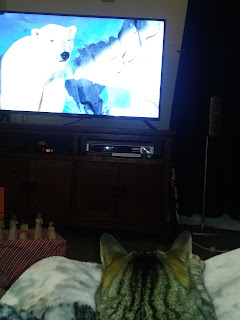 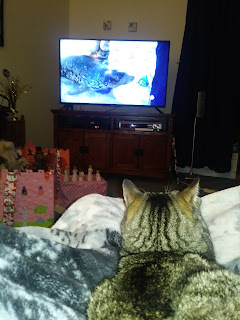 🦌🦌🦌🦌🦌🦌🦌🦌🦌🦌🦌🦌🦌🦌🦌🦌🦌
We had ice pellets last week. The sound was both amazing and sad. The poor deer had ice accretions on their backs. Not a great photo, but you can see what I mean. By the time I fetched the camera, they were headed down the hill. 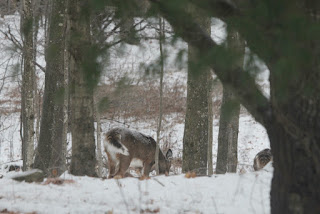 The deer like to browse under the feeders, as well. deer from Jennifer Jilks on Vimeo.
When I was up this morning in the dark, there were three deer sleeping under the big white pine tree.
They do this often. It's a safe place. The predators avoid the back yard. 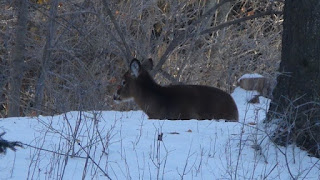 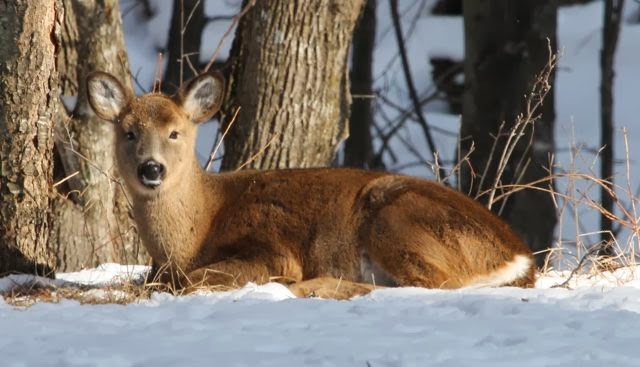 ...you sure have a lot of night visitors.

The cats must wonder what those big fellows are.

Our lives are in such turmoil right now. I find we are cat fighting and arguing over stupid stuff around my house. We have no outlets! Like you I find I'm suffering with brain fog quite a bit. We are missing that outside stimulation.
We put the new trail cam on the porch post pointing at the bird feeder. I have it set at still photos, the default setting. Gosh, 1000+ photos of chickadees and nuthatches later, I think it's time to move it to a bunny trail or something!

You are a safe haven for the deer.

Hello Jenn,:=) Merry Christmas! That's a fun picture of your cat Cinnamon watching TV. The Arctic Vets do a great job, The Polar Bear is enormous. and I enjoyed the videos as always.
Have a Happy New Year, and take care.

I'm surprised with all the work they are doing with the polar bears, the lab hasn't set up DNA testing. I think it's fascinating to see how tall they are and the work that is being done to keep them safe, even when they are a danger to humans.

Lovely post and great camera shots of the deer, too. Have a super deligthful New Year, Jenn.

To wake up to the sight of deer sleeping nearby is a pretty wonderful thing.

Your ice sounds scary and grim. Be careful out there. And thanks for the tip on Arctic Vets. We have National Geographic on my cable and I'll have to check it out. Happy New Year!