We've varied progress on projects. Successfully snagging his Rx after recounting his tale in my previous post, from there we came home to rescue froggies. After that I did the work on our taxes. (See previous post.)

They snuggle up to the warm rock, and that's where things go awry. I counted 19 lethargic cold frogs under a 3 cm of ice on Nov. 24. They are fooled into thinking this is a warm place. 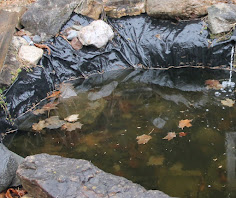 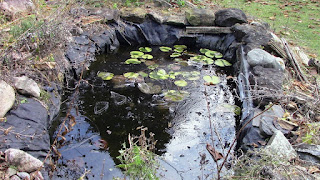 I broke my long-handled net, I'll have to get another for next year, and captured 4/19 and took them down to the frogpond. I had the break the ice with the chopper. I have a shorter net, which sufficed.

I had to take the ice chopper down to the frog pond and I hoped for the best. 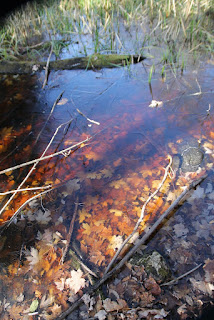 Later, I found another 5.  It looks like 4, but the frog on the upper left is hiding under the top frog! 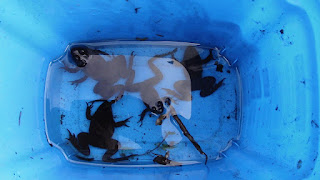 When I took them down to the pond, I could see a couple of them peeking their heads out of the water. I think in the goldfish pond, it cools and reheats so slowly their bodies don't get the message that it is fall.
Yet later, another 2! = #57 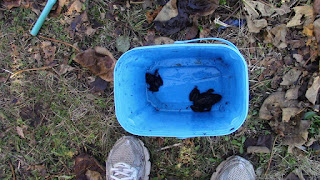 The pumpkins have been a hit. As I approached the trailcams, I could see right through the pumpkin! 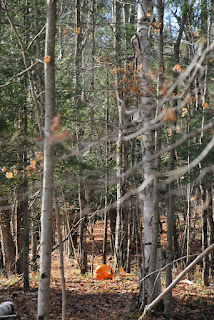 I'm really behind in showing our critters, as there has been much action and/or stress here. Things are hopping outside with double-digit negative temperatures.

The doe is being followed by young buck Carl! 💓💔💕💖

🎃Carl likes the pumpkin! You can hear the graupel falling.

We had three coyotes at once Nov. 18th🎥, but this is a single Chad coyote on the 19th! I can't tell them apart too well. One, however, had a darker tail, whereas the others look like their tails are dipped in ink.

Several deer in the backyard, they are beginning to make single gender groups for winter yards.

...you certainly live in critterville.

You are the frog whisperer.

We can all be fooled from time to time. It’s very kind of you to rescue frogs from freezing.