🐸I made four trips down to the wetland last week to deliver a total of 18 frogs. I had recovered enough by Oct. 19th to go frogging again. I captured 3 in the morning, 5 in the afternoon.

The water is getting colder (4˚ C., which is air temperature this morning), and the freeze/thaws of Climate Change doesn't bode well for my froggies. They get trapped under a layer of ice, and then it thaws. They rise to the top and freeze overnight. It's a horrid thing to see. 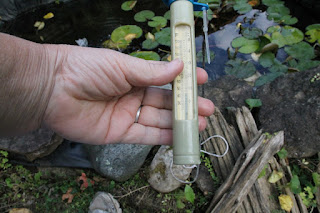 That makes 26 froggies I've trucked down to the wetland, which is wetter than it has been. We had another dump of rain overnight. (15 mm or 3/4 ") 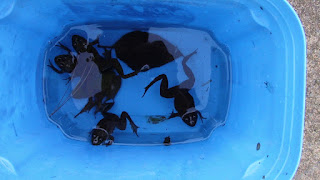 I counted them, there were 7 still visible. I gave up for the day, though. They are getting a bit wary and hide when I just approach. It's a good challenge for an old girl!
Oct. 20th – I moved 5 more in the morning = 31 froggies moved from the goldfish pond to the wetland.
The little twerp toe biter was accidentally captured in the net with the frog. It is amazing it didn't get the goldfish. I didn't want it to stay in the bucket with the frogs. I put my hand under it and whooshed it out onto the ground. Picking it up in the net, I took it down to the wetland with the frogs. 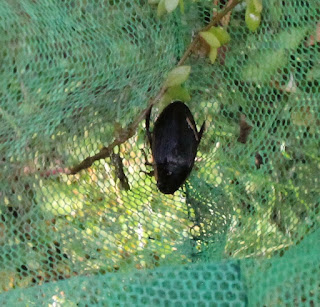 After lunch, 5 more froggies. This time Cinnamon helped me. That makes 36 froggies. My buddy came with me. What a wonderful days it has been. It's about to get cold, though. Here he is running to keep up with me. (He gets distracted!) 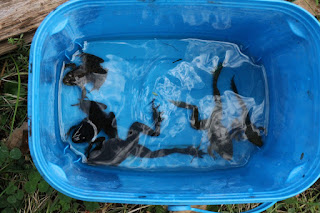 Nov. 26 – I moved another 7 to just off the dock. Grand total 64! Popped them into the frog pond off the dock.