I grew up in downtown Toronto, with many diverse friends. My white world, with two working parents, was pretty good. I was raised to treat others as I would like to be treated. The kids at school were from various socioeconomic backgrounds, ethnic groups, and religions. This isn't true for all. People in Canada are getting a knee on their neck frequently, The National reports. 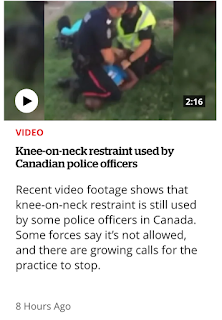 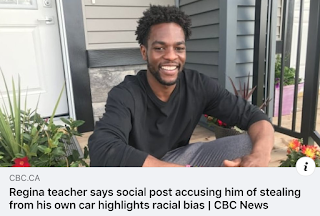 Rural people are different, if this is all they know and have no experience with other cultures, values or traditions. It is important to understand White Privilege. We have no idea what racism is about. With all that is going on, we cannot close our eyes. Said one protestor:

"We have to change the way we think, and how we feel about one another."

Our Minister Hussen, MP and lawyer, spoke on camera about the racism he faces. We have many diverse MPs and MPPs. Not all are equal, however.

Many people of colour make complaints about unnecessary, uncalled for traffic stops, for example. Racial profiling. Black men driving their own Mercedes, in their own neighbourhoods, stopped by cops. This is my MPP, who posted this racist comment, since deleted. This is white privilege. Hillier who earns his living (6 digits) on our tax dollars. I cannot close my eyes. 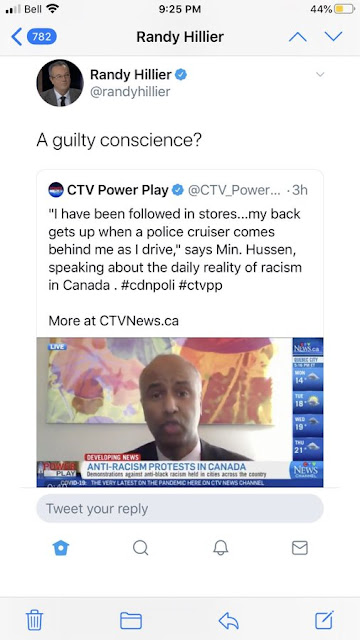 A Twitter buddy reminded me of Hillier's reputation, this from 2009:

"Then there was the Dombrowsky email. As President of the Lanark Landowner's Association (LLA), Hillier emailed a photo of a dead deer with a group of hunters. Under the photo the caption read – Leona. He sent the email to MPP Leona Dombrowsky.  Dombrowsky sat on the email, then released it months later on the eve of an LLA protest in Toronto. Hillier never apologised for sending the email. He only said that it appeared Ms. Dombrowsky did not share his sense of humour."

Some of our Canadian politicians are speaking out. Our PM said this:
"Anti-Black racism exists in Canada and we must do all that we can to end it for good. So as leaders and as allies, we must listen to, learn from, and work with every person who marches and posts and expects more than the status quo."

Jagmeet Singh (leader of the Canadian NDP) said, "When you see someone that looks like you being killed like that it makes you feel like you have no worth and no value. It makes you angry." 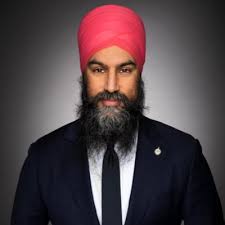 RACISM. It exists in Canada. We must hear and bear witness to their stories.

If you aren't part of the solution, you are part of the problem. We need to look for the allies. Many are marching and protesting peacefully. Vancouver, Ottawa, Kingston, Moncton, Halifax, and other Canadian cities.

Ahmed Ali
@MrAhmednurAli
·
9h
It's a privilege to learn about racism instead of experiencing it your whole life.

I found this online.

Consider the following graphic, developed by Safehouse Progressive Alliance for Nonviolence (2005) and adapted by Ellen Tuzzolo (2016): 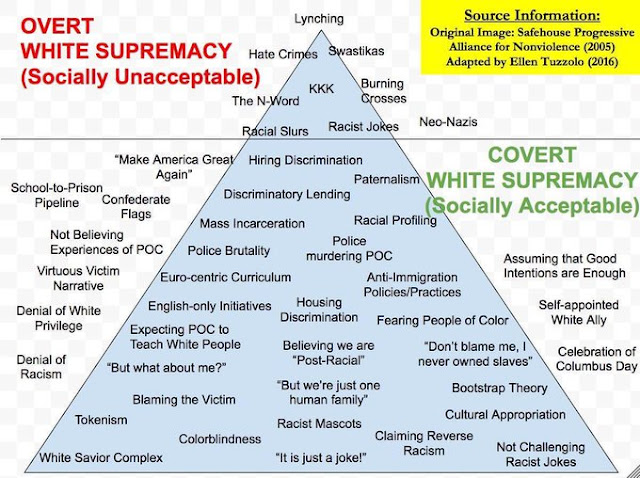 ...it's about time to talk to each other instead of screaming at each other! PEACE!

It has ever been thus and the brutal truth is it will ever be so. UNLESS ENOUGH HUMAN BEINGS RISE TO THE FULL POTENTIAL THE INTELLECT PROVIDES AND STOP FALLING TO THE BASE, ANIMALISTIC NATURE... (sorry for shouting, but am as frustrated and despairing as any right-thinking person should be)...

Many societal 'empires' have come and gone and, after periods of 'dark ages', more arise and each will, for a while, undergo their golden period. We are, I think, witnessing one of those major shifts... YAM xx

I give Trudeau credit for not commenting directly on the U.S. but stating that there is much work to be done. This book was recommended to me just yesterday:“White Fragility” by Robin DiAngelo. Yes, privilege is learning about racism as opposed to living it everyday.

It seems the proximity of the USA to Canada, brings their problems to your doorstep.
White supremacy, white privilege - totally unacceptable concepts.

I have never voted for Hillier, and I hope that many will join me next time around.

It is hard to talk or write about race i.e. distrust of others. The quote that Yamini put up says it fairly clearly. Having grown up in Kansas I think racism was built in to my upbringing. I think I treat others as I would like to be treated but there is still something inside me that is surprised when a person of another colour speaks better English than I do which makes me think that I am still a bit racist in spite of my attempt to not be so.

Individually, can one person make a difference, We need to unite and stamp out this crime, it is here in NZ too, and I fear for the years ahead for the younger ones growing up. Hugh said yesterday, " we had the best years" and we did. I can recall on one hand people who died when I was young, mostly a murder within a family when one person became suddenly mentally unstable. the 1950's, 60's and even 70's were safe. Now, I am thankful to live here, away from violence that has overtaken your world up North. Stay calm, Jenn, give JB a cup of herbal tea, and sit on your porch and look at nature.XXXXX

Albrta saddens me as there is very definitely much racism

My children are mixed race but it isn't obvious. They were raised as, and are, FEROCIOUS anti-racists. They grew up in a rural community, But Our community is a bit different. With a big scientific research facility close by, we have quite an interesting and diverse population.

I guess racism, PREJUDICE is alive around the world. I’m hoping that all this protesting and dialogue will bring about some change. You have the benefit of having Trudeau. We have Trump. You have more hope.