Daisy has been rehomed to a lovely woman.

UPDATE Feb. 13: Daisy May, as she is now called, is settling in. Here she is, sleeping on a seedling/plant heater. 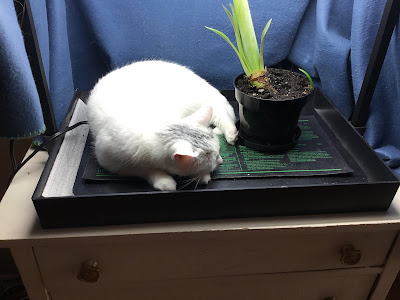 UPDATE: Sat. Feb. 9
I have an update on Daisy May (her new name). I think she's settling into her new home. Her new mom, Helen, had to go out of town for a couple of days, and she had people in to feed her. From JB's cousin, who supports Daisy May's new mom:


"Helen phoned yesterday after she got home and Daisy May was fine. She had lots of visitors and wasn't upset by Helen's absence. Apparently she likes being on top of cupboards.... "

It's not a surprise! Daisy loved climbing trees.

UPDATE: Jan. 28
.S. I heard from Daisy's new mom. She is going to call her Daisy May. This is sweet. Daisy knows her name, I'm glad she didn't totally change it.She didn't eat anything the first two days, and hid in her new room, but emerged yesterday and got up on the window sill. She's going to be an indoor cat, now. I'm sure she will adapt.

UPDATE: Jan. 26th
Her new owner has picked up Daisy. I'm a mess. Happily, her driver is JB's cousin. Small world. Her new life, with her new mommy, begins. Our stress is over.

Thursday afternoon, having negotiated hubby's cell phone (fat thumbs), and misdialing, twice, I made contact with Daisy's new mummy. I broke down, talking to her. She sounds like a good person. That's all anyone could want for an animal one needs to rehome.
I've never rehomed a cat. We had a kitten, once, a Manx, with no tail. She kept jumping the fence and hanging around the neighbour's bird feeder in the city. We gave her back to the shelter. That was different.
Daisy likes to pray when she plays. We're sending her with this toy, her bed. 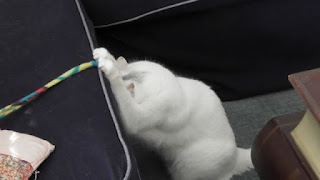 We put her in the kennel Dec. 21 - Jan. 17th. ($581 – it was worth it.) Four weeks of peace and quiet. Hooper was much less frightened, and normal. We roared out to pick Daisy up Thursday, as the snow was coming Friday. 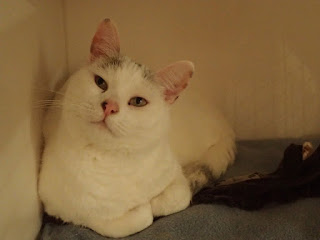 She meowed loudly, and didn't want to go into the carrier. Cassandra, more experienced than I, got her in.
Home again.
Daisy checked out the entire house, twice. I was watching my TV shows upstairs, she was content
sitting in the basement watching curling with Annabelle and JB. Hooper was upstairs, with me. 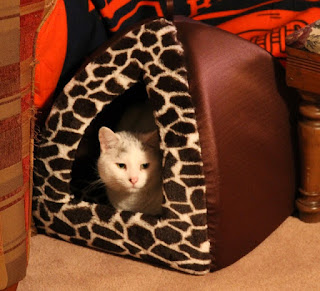 Back inside, for some crunchies and cream. I carried her to my chair and brushed her. She went to her crate and climbed in. Then, she went off into the bedroom. We popped her into the crate overnight. 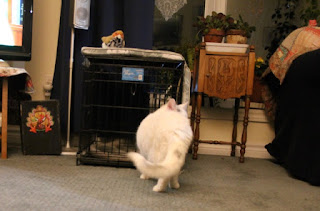 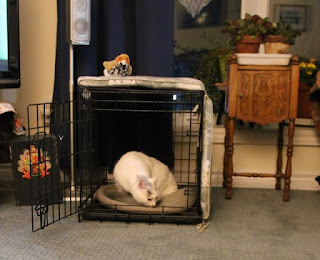 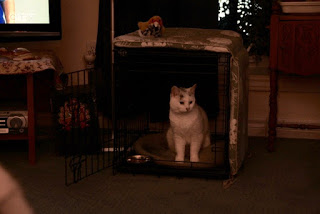 I was up at 5:30 a.m. Friday morning. I fed the other two, Daisy went downstairs onto the caterpillar. She ambled upstairs, and sat in the doorway watching Hooper.

Normal morning, Friday, JB was up at 7:30, and Daisy was supervising. She was playfully knocking things off of the counter!
Hooper watched from the box in the living room, but he didn't cower under a bed.
JB began doing his morning routine, then three cats were in the bathroom. Hooper was brave, Daisy went after Annabelle, as you could see she felt threatened.
The dynamics have changed. Annabelle doesn't back down, now. She owned it, not just when she felt she was defending Hooper. Hooper isn't cowering under the beds. 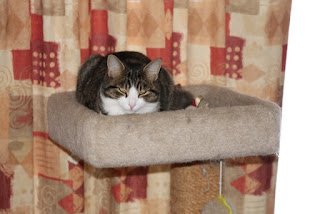 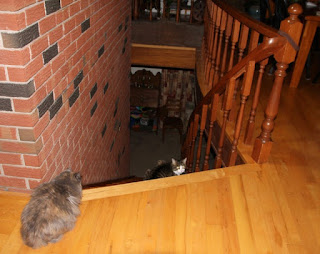 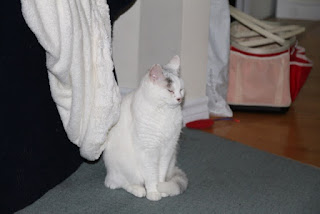 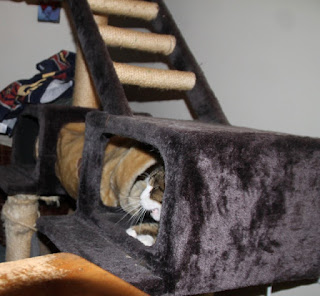 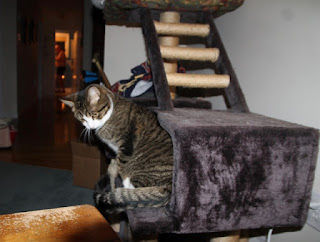 The crisis came when Hooper and Annie wanted to come in and see what JB was doing in the bathroom. That didn't go well. Daisy felt outnumbered. 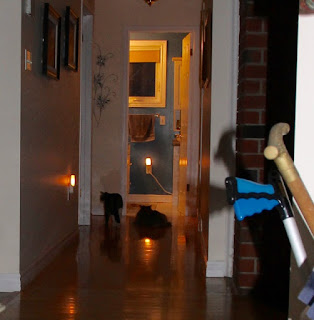 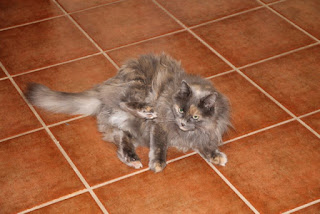 She came and sat on my lap, I brushed her. That lasted until Annie walked under my feet. Daisy scratched my ankle, jumping down to attack Annie. Annie stood up to her, with this new dynamic. Daisy slept in her crate for a couple of hours.
Hooper slept downstairs on the caterpillar. 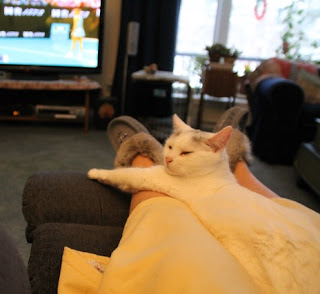 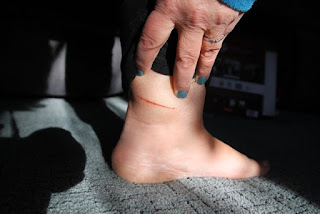 There was another fight in the afternoon and last night. Hooper spent the night under the stairs, in shelter.
JB bought some new cat treats. 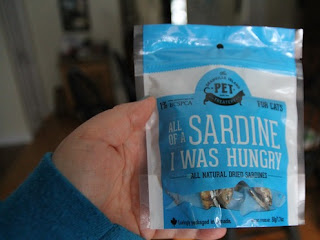 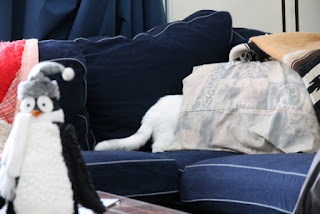 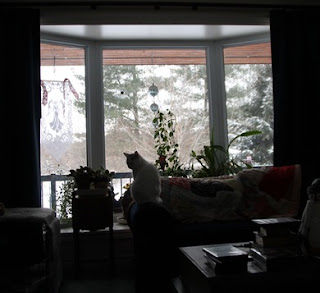 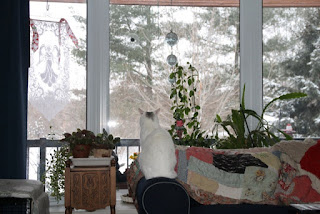 I give up. I bawled.  Does anyone want a cat? The local cat shelters are packed. We have been such responsible cat owners. We've had Daisy for most of her 6 years, adopted her at 3 months as a rescue.   Back in the crate she goes. 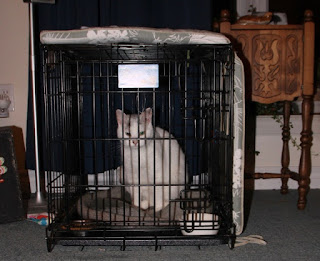 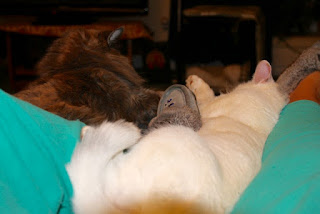 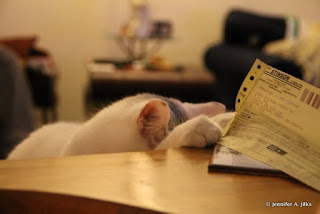 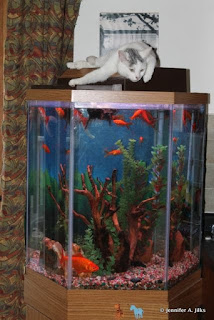 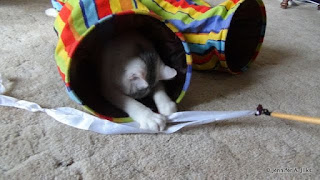 The toilet and the pipes, we think, are fixed. More on that later. What a battle.

*Daisy – she is breaking my heart
A year ago  Hooper & Daisy from Jennifer Jilks on Vimeo.

That is discouraging, poor kitties.

I have never owned a cat, only dogs. It is a shame they are not getting along,
I guess Daisy is the boss? I just loved your header when I pulled up your blog, beautiful male deer. Thank you so much for linking up and sharing your post. Happy Saturday, enjoy your day and weekend. PS, I appreciate and thank you for your comment on my blog.

Yes, that's what you need and what she needs -- a new home where she is the only cat. But that is hard.

Drama time at your house! I love cats but when they are trouble, then I win and they go live somewhere else.

Hari OM
Aw heck, Jenn, it seems Daisy is determined to have it her way. I do hope a resolution comes soon, for all your sakes. YAM xx

I've been wondering when Daisy was coming home and if the dynamics would change. So sorry there is still trouble in paradise. I agree that she now needs to be an only-cat pet. You and J.B. have valiantly tried your best.

...they won't want to be outside this weekend, I know that I don't!

Aaaah, that's hard (but also a bit interesting to read for an animal lover).

Those cats of your make for an interesting time. They seem to be in charge! LOL

I had hoped so much the stay would sort Daisy out. It did for Boris. Maybe she does need to be in a " one cat home". Was she Ok before this? Keep warm, let the plumbing behave. A cool wind here, so welcome after hot days. We let Boris out yesterday not on a lead, all went well.

such a problem...hope you can find a good solution for Daisy.

You take good care of the cats, they have a good home.
Best regards, Irma

The crate might have to be the time out for her every once in awhile.

Maybe Daisy needs a new home so she can be an only cat. Doesn't seem fair to the other cats to be scared all the time. I feel sorry for you it is a big decision. :(

Sometimes a tough decision has to be made which will be good for everyone. Cats have their own character.