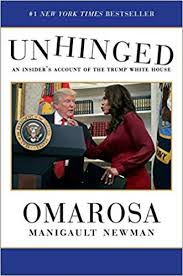 
Hubby bought this for me, on a trek into Ottawa. I've read Fire and Fury, we are going to read Fear, by Woodward. I was game for it. There've been a lot of books written about Trump (see below). It's the common threads that are interesting.

This is an excellent read. Omarosa is a well-educated, hard-working woman, rising out of poverty to the upper echelons of society, rubbing shoulders with the elites. She has faced much racism and abuse for taking the job with the Administration. For me, as a white woman, it is important to read autobiographies of people from varied backgrounds.

How else could she make a difference, other than being a part of it? I can see how she would have taken the job with Trump, at $15,000 a month, what could go wrong? She organized meetings with Trump and various marginalized groups. She gave him briefings, intended to educate him. The problem was she estimates he reads at a gr. 6 level, as doesn't retain anything told to him. In meeting after meeting, presenting talking points, he totally waivers from his staff's briefings. He cannot read well from the teleprompters. He fudged the word 'anonymous' most recently.

What I found surprising, is that she was originally working for Hillary Clinton's black caucus group. She anticipated being hired for it later, but was replaced by someone from whom Clinton wanted a favour. That's politics for you.

Another aspect of this, is Omarosa's notion that Trump was NOT racist. In her work with him during The Apprentice days, she did not face outright racism from him. It shows he can control his attitudes. when it serves him. It was only when he was in the Whitehouse that his values were clear to her. So she says.

If you are interested in politics, and the behind-the-scenes of an election, it's a good read.
Here are some of her points:

Pence’s staff refers to him as the president

Trump is a reality-challenged narcissist

Omarosa has the best title.

I love you my friend. Our country will find her footing again. Hang in there, dear, in your wonderful neighbor Canada!

I think she is an interesting figure. Not sure she is totally honest about her motives though,

I saw the author or a few talk shows, promoting this book. I haven't read it. So, I'm glad you reviewed it. I'm finding I need breaks from politics these days and don't think I could stomach an entire book. Maybe in a little bit... Thank you for reviewing!

Well, I for one, will not read her book. Her saying he showed no signs of racism on his TV show is just nonsense. As the highest paid staffer of his, she took the job for the money. She had no intention of being a liaison to the black community. She was just there to do his bidding until they fired her. Then, all of a sudden, she discovered how bad he is. Really? I, for one, have known it ever since his TV show! Why didn't she? Because she didn't want to see it.....she wanted the financial gain for herself.

I'm just waiting for the nightmare to come to its inevitable conclusion.

I recently read a book by Kurt Anderson in Trump's voice with photographs of Alec Baldwin playing the part. That was funny, until you realize it's got to be even more absurd on the inside.

This is one of those books that I question the motivation behind so I don't want to financially support the author and therefore won't likely ever read the book.

Outside of that fact, I am a bit conflicted. On the one hand she has tapes of at least some of the stuff she alleges in her book. On the other hand, I have a problem with her (or anyone for that matter) making unauthorized tapes in the White House.

In any event, great review! Thanks!

I haven't read any books about Trump and won't. It's a very difficult topic for me. - Margy

Books galore. Thanks for the report.

I'm impressed that you are reading so many Trump books as a Canadian, but maybe that allows you to have some distance. Living this nightmare, I need books to escape. Maybe when he's gone, I'll be able to read something beyond the disturbing analysis in the newspapers and on NPR. When I'm not working or reading, I'm calling my senators and helping new Democrats get elected.