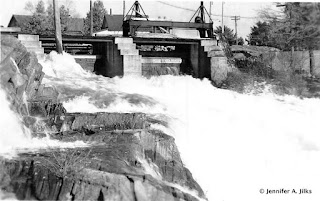 Doug Ford, running for the leadership of the Ontario Conservatives (the Liberals are in power), traveled to Bala Falls for a photo-op and a chance for publicity. Politics interests me. Amazing, the ethics of milking this issue for political opportunity.

You must know Doug Ford. His late brother, Rob Ford, was the infamous mayor of Toronto. Doug is still in politics, his family of millionaires aren't busy enough! A month ago he thought he'd run for mayor of Toronto. With the #MeToo movement sinking the previous leader of the party, Ford decided to abandon that ship and run.

This project is on its way. It's been going for 12 years! Ford claimed he was going to stop the project. This is the latest from Swift River.

The project is expected to:

Swift River Energy Limited is a 100% Canadian owned company established in 2004 with a mission to develop the North Bala Falls Small Hydro Project, small, low-impact, run-of-the-river hydroelectric generating facility. The team is composed of individuals with decades of experience building and operating a wide array of facilities in complex and challenging environments.

It looks lovely! This is a plan for development to reharness the power of the river, which includes an observation deck. I've been a supporter from the beginning. This is progress.

Our January newsletter will be emailed, mailed this week. It's also available on our website. https://t.co/MsbFmxSABt pic.twitter.com/IiBdiJfeTJ
— SwiftRiverEnergyLtd (@BalaFallsHydro) January 25, 2018

In my opinion, billionaires should not be given political power of any kind. Look at the stranglehold they have in the U.S. where out Supreme Court has given corporations "personhood" and therefore the right to free speech, a.k.a. the right to flood politics with enough money to have most elected officials beholden to them.

I finally looked up the location and was quite surprised.

As long as it doesn't detract too much from the falls, it's okay.

As for Doug Ford, combined with his verminous late brother, those two were the worst people ever elected to any position in Canadian history. He can join his brother in hell, the sooner the better.

Money and politics do not mix well!!!
The USA is proof of this.
When will politicians learn to listen to the people that they supposedly represent...I give-up~

I'm afraid that Doug Ford is an ignorant buffoon like Trump.