The title irks me, but I agreed that this might have some good content.
I don't usually put up guest posts, but sometimes I have hubby do reviews for me! This is his review. Thanks, toots! 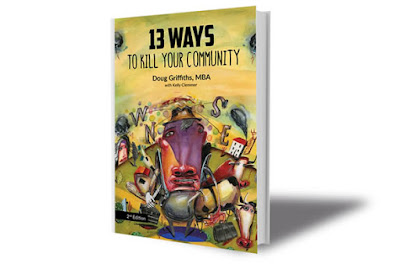 I will start out by stating that my wife and I live in the country on about 16 acres of mostly forest. We are near a small town of about 7,000 or so.

The title of the book "13 Ways To Kill Your Community" seems counter intuitive to the subject,  but Mr Griffiths is now in his second edition so it must work. 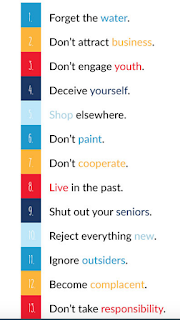 The book is an easy-to-read 150 pages. It gives thought for what would appear to be obvious points that, however, are all too often not followed. The anecdotes and examples better illustrate his points and do hold the reader's interest. I would also commend his straightforward use of the English language with out the over used embellishments of similar works, e.g., words such as paradigm and synergy, arrow diagrams, and historical quotes out of context.

Each chapter covers one of his 13 points with some, but not overly frequent reference to other chapters. Probably any reader will relate to some of the situations outlined , and may in hard reflection see some of their own attitudes for consideration.

Small towns across Ontario are struggling with declining business and shrinking populations—an economic shift that is forcing rural communities to reinvent themselves or die. Now, a lifeline is on the way—in the form of Doug Griffiths, the “Community Therapist” and founder of 13 Ways, Inc.

Your hubby's review is concise and to the point.
Your community is lucky to have you both as its members and volunteers.

It probably should be read by the politicos of CP. :)

One thing about our community is there are lots of individuals and groups that work to build up the community. And lots of studies, of course. - Margy

I knew Hubby would recommend his book. There are all kinds of books with a snazzy title and how to. sometimes the opposite might ring a bell with people.

Thank you for pointing this book out!