A beautiful day: Tigger buck, Daisy, and a pair of does

My cold is slowing getting better. Thanks to all who've wished me well. Hubby has been a brick!
I called him to the window, a yearling was hunkering down under the pine tree. In the background, just behind the bird feeder, was Momma. The pair were looking over beside the house. 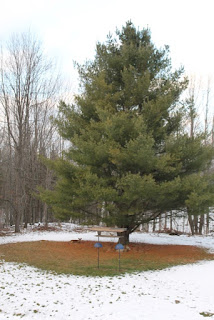 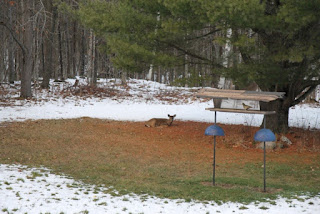 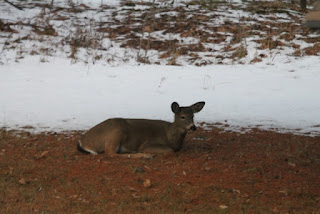 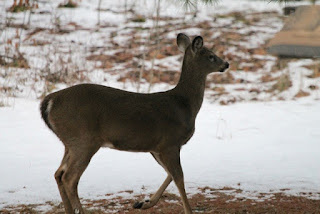 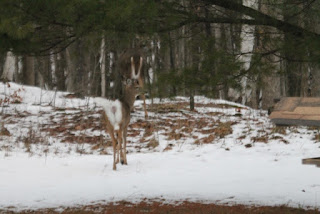 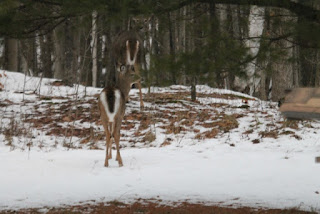 Then, I turned, and there was Tigger! 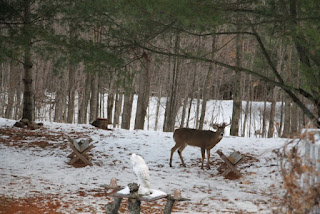 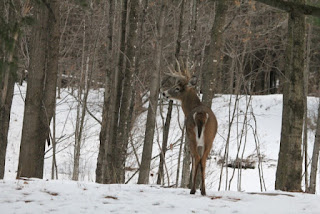 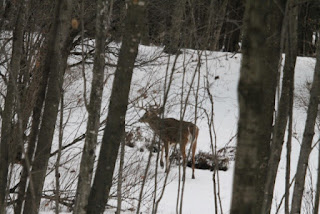 Tigger wandered off.
The sun began to set, and lo, behold Tigger was feeding at the bird feeders out the front window. The little beggar. He began to go towards the peanut feeder. (The purpose of that is to stall the blue jays, and give the other birds time to get some sunflower seed.) Usually, by the end of the day, the feeders are pretty low. 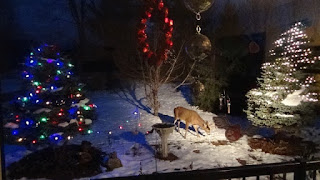 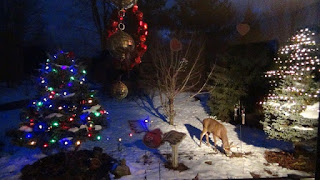 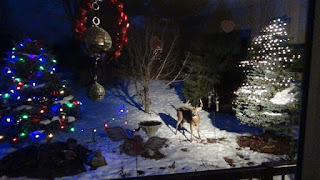 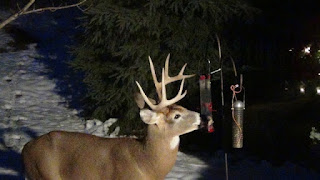 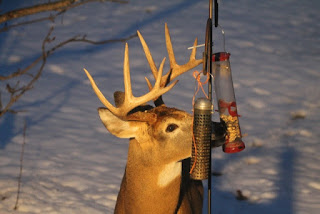 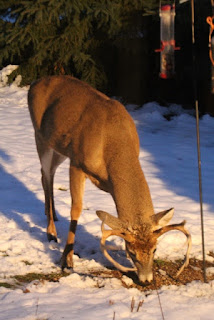 We watched him feed, sticking his tongue into the hole, dislodging bird seed, then he went over to the tin bowl. I knew there were some peanuts left, and I was worried about his antlers. Opening the door,
I spooked him. He got caught up in the feeder, and knocked the lights off of the hook. 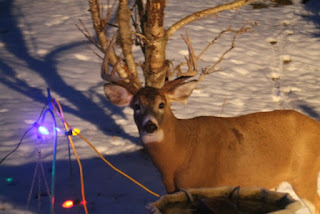 He ran off, clanking metal down the hill. Bowl gone, lights off of the hook, birdbath heater plug needed to be fixed. In the dark. I searched in the dark, no dish.

The next morning (Thursday), I did some research. I found out he'd been back 20 minutes later. Daisy and I didn't find the bowl. We did see coyote tracks, so I imagine they stole it!


Not to be outdone, Daisy decided to garner some limelight. We were searching for the peanut pot all across the forest.
She went skating on the frog pond ice, which is filling up nicely with the rain and snow we've had. What a girl!
Daisy dances on ice from Jennifer Jilks on Vimeo.
Posted by Jenn Jilks at 07:43

Hari OM
Heheheh, love your story-telling on tigger clip... but Daisy on the ice was brilliant!!! YAM xx

You sure got some nice shots.

Your lovely lights on the trees, feeders, and then along came Daisy, that is so entertaining, do you every worry the ice might crack and she fall in? Love that video.

That's a good question, @NancyJ. I didn't worry about Daisy, if you look closely you can see that the wild turkeys were walking on the ice the night before. Their tracks were frozen in the ice. It got really cold overnight.

Daisy is 7 lbs., the turkeys are about 4x's her weight and size! I knew it'd hold her, besides, as she walked, she'd figure out out and it is very shallow!!!

Thanks for sharing your wonderful videos! The deer were beautiful. I loved watching Daisy dance on the ice. I was wondering who's tracks they were in the ice. Nice!

It is such fun to watch Daisy!

Deer can be cheeky little beggars .They get away with it because they're cute.