Communications Bunkers from the Cold War

I've been posting about  Ottawa Valley's Great Fire of 1870. We drove up so that I could do some research. The location includes Burnt Lands Provincial Park Alvar. The alvar shows much evidence of vehicles, sadly.
You can just see the building in the distance. Parts of the fence have been cut, and others have entered the property.

As I gazed over the fenced property, I spotted a building. I was quite curious. Turns out it was a bunker, and an abandoned NATO Antenna base. It was the perfect site, with the open, flat lands. 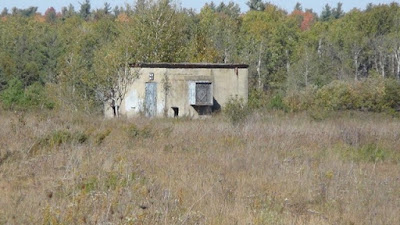 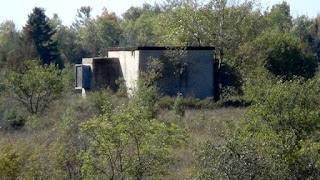 Turns out, there were radio towers, as well, connected to the bunker. Burnt Lands park near the top, at the bottom a quarry.
It is quite sturdily fenced, except where it's been cut apart. The cement-looking building intrigued me. Not enough for me to trespass, but someone else has!

Underground Station
VE3CWM transmits from 25 feet underground in a former secret nuclear bunker (the Diefenbunker) located in the village of Carp near Ottawa, Ontario, Canada.
Officially known as Canadian Forces Station Carp, the facility was operational as part of the Canadian military’s communication system 24/7 for 32 years, from 1962 to 1994, before being decommissioned.

2. Back to the Radio Bunker On An Abandoned NATO COMM Base

Video Published on 4 May 2016
This blast resistant, sealed off, top secret room was used at an antenna farm that was part of an underground bunker complex called the Diefenbunker. It was built around 1960 and abandoned around 1998. There were about 20 antennas here, plugged into the Diefenbunker, about 10 km away. It has a solid 2" thick steel door. There is evidence of a generator, air conditioner, and/or ventilator.

The bunker measures 25.8m square, and is in the middle of the closed facility. The videographer couldn't enter the sealed building (video #1), but found a sister bunker (video #2) which remains unsealed, and therefore, exploited by graffiti, with litter within the building.


The towers are gone, but the concrete bases remain. 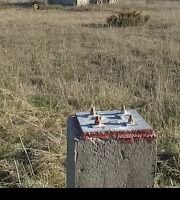 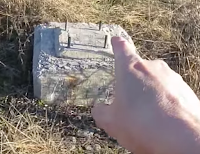 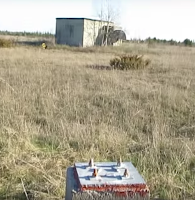 Exploring A Radio Bunker On An Abandoned NATO COMM Base II

Published on 3 Aug 2016
This appears to have been closed around 1985, and is located near Ottawa, Canada.  The Diefenbunker complex had two antenna farms that were almost identical, one to the east and one to the west. This video is near Dunrobin, and as you can see, the doors are open......


Then there were the barracks: Federal Readiness Units 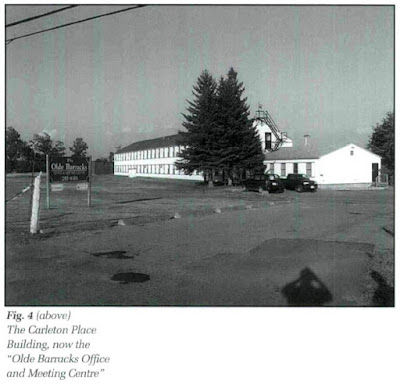 This was all supported by the barracks in Carleton Place. It burned down, May 9th, 2016, and debris removed. Now, it is gone. Olde Barracks, near Carleton Place ,  it has been empty for years. It is a legacy from the Cold War Years (1960s), used in the 70s, and all the windows were boarded up. The two near-identical buildings — the other was built in Kemptville — resembled military barracks.

The locations were chosen because they were west of Ottawa — upwind of the presumed target — and believed to be far enough to escape a nuclear blast while being close enough that basic operations could be up and running within three hours. By the 1970s, the building was used as a government training centre, with later occupants including the RCMP and the Canadian Security and Intelligence Services. (Photo - 2004)


They were known as Federal Readiness Units, with 12,000 square feet above ground and 6,000 below. They were to be used to stockpile supplies and house about 80 emergency personnel who would sleep in shifts so two could use a bed.

This guy has mapped them all out, from some old maps. From his blog post:

A two-story communications bunker was also constructed near Perth (Richardson Detachment), which was staffed exclusively by members of the Royal Canadian Corps of Signals (RCCS), later 701 Communications Squadron post-Unification.

Drummond Concession 1, east of Perth. I guess we'll have to go for another drive!

Although the bunker was never used for its intended purpose, it did serve a valuable function as a government communications station staffed by RCCS personnelNo. 1 Army Signals Troop.
Source Material: Cobourg: "Abandoned Military Installations of Canada Volume I: Ontairo" by Paul Ozorak, information supplied by the Diefenbunker Museum (2004) & information supplied by the Carp branch of the Ottawa Public Library (2011).   - http://www.militarybruce.com/
Posted by Jenn Jilks at 09:02

We visited the Titan missile base museum in Arizona several years ago while we were on vacation. It had a bomb proof bunker at the bottom of the silo with equipment much like that in your picture. - Margy

What a great find.

You wonder how long that structure will last. It's been awhile since I've been out at the Diefenbunker.

so interesting. the graffiti, such a shame...clearly a hangout now for young adults!!

There were some interesting buildings and defenses. We had a Diefenbunker here. Just before the Mackenzie river empties into the Arctic there was a radio base for WW II. They had a 750 ft tower. They knocked it down and left it. The base of the tower was about 50 X 50. They didn't want some future enemy to use the tower.

Some fine research there Jenn. A very interesting story. And now they tell us the Cold War is back. I sincerely hope not.

Hari OM
this is the second time this week I have learned about underground nuclear bunkers (there is one which is now refurbished and a museum over in Fife)... given I practically live on top of the British Nuclear submarine base, ought I to be paying attention...???!!! YAM xx