Who goes there? A snow story!

Lots of my fellow bloggers love reading the stories in the snow. This is a deer mouse tale! I caught this one, back in the summer. It's also a hubby, doe and buck and robin tale! 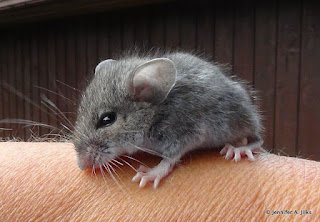 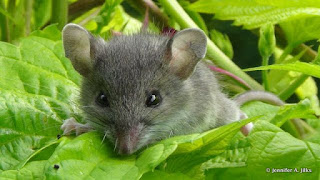 Hubby was out using his new snowblower. I was doing the back deck, and filling bird feeders. Sadly, there have been deaths in the US from this storm.  The NY Times reports:


By Friday night, nine deaths — five in North Carolina, one in Virginia, one in Kentucky and two in Tennessee — had been attributed to bad road conditions and ice.

We were prepared for last Monday's snow. We are used to such dumps of snow. 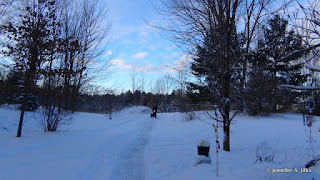 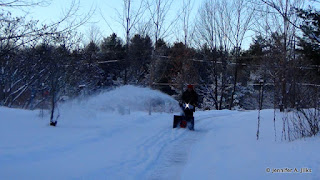 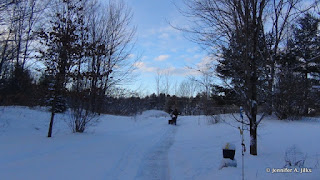 As I walked to fetch the newspaper, I noticed a little but very long track. Having confirmed the track pattern: the two paws, plus the wee tail dragging in the snow, I figured it was a deer mouse. It went a long, long way from the side of the house, around the fence, across the front yard, across the driveway and into the snow. I scouted all around and couldn't find where it came from. It must have come for some seed from under the bird feeder, but this is about 50m away! 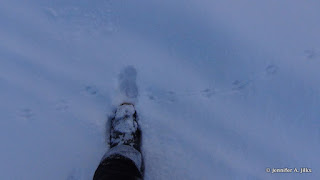 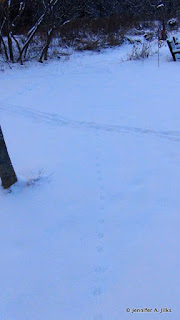 This part was fun. as it headed to the driveway, there is a wee curve in the line of the relatively straight track. There is a little hole, as well. I think an owl suddenly went after my traveler mouse! We have quite a few different kinds around here, but the most common or the one I've seen most often, is the Barred owl. 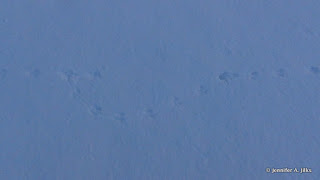 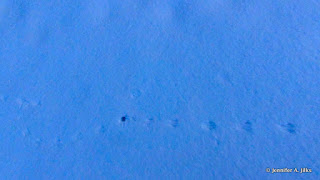 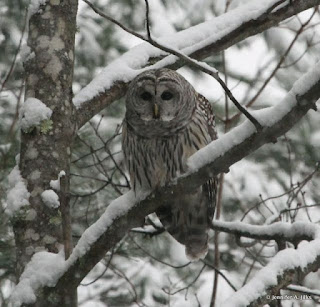 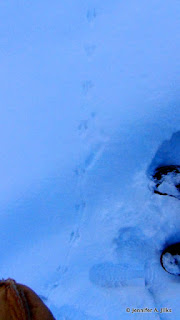 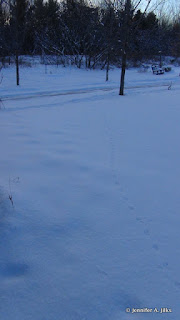 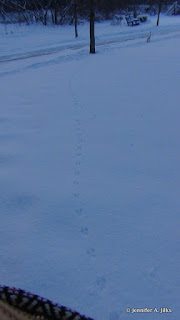 As I was looking for the origin of the deer mouse track (which was beside the house), I found another deer bed just behind the decorative fence. A momma and fawn, with the second fawn just behind the tree. 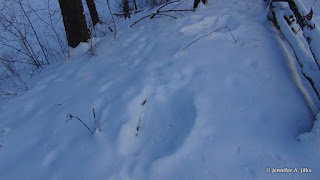 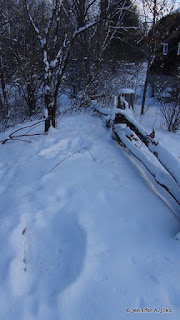 What is fun, is the the males, who have been scarce, have turned up again. They still have their antlers, too. This is unusually late. I haven't seen my favourite, Tigger, yet. 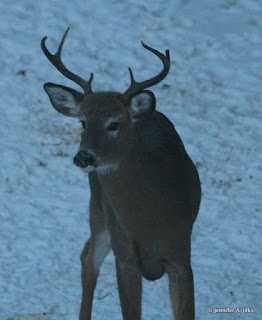 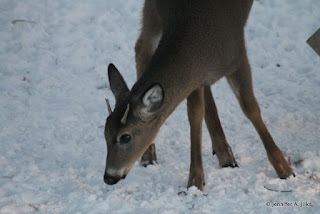 Then, to my great delight, I found a Robin. There are Mourning doves (3), two Blue Jays, and my Robin in the Horse Chestnut tree. Robin came back later in the day for another drink of water. They normally migrate, although with our mild December and January (till now!), they can overwinter by eating berries, like the sumac berries, of which we have a fair number. 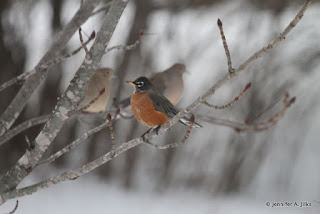 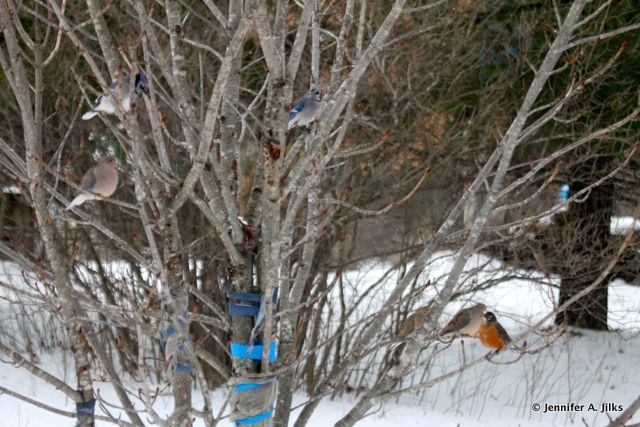 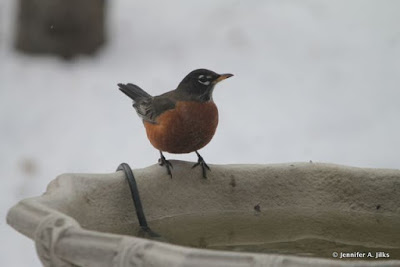 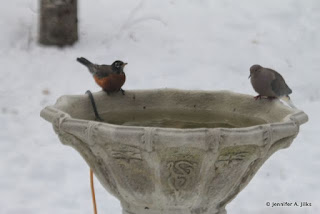 Hi Jen, wonderful critter post. The mouse is cute. I love the owl and the robins. Great photos. Thank you for linking up and sharing your post. Have a happy weekend!

Hello!:)What a delightful critter post. You had some cute visiters, and I enjoyed seeing the mouse, birds and deer.Wish I could see deer in my garden!:)

I would LOVE to see an owl... and snow. It looks really pretty, and with all those critters like a Disney movie.

A lovely series of snow photos. Thank you for taking us on this lovely nature walk in the snow. We have snow falling as I type this. My hubby may be wishing we had a snow blower by the time the blizzard has stopped. But we don't usually get this much snow.

I've noticed quite a bit of those berries still hanging, so they're definitely handy for birds getting some variety in their food over the winter.

An owl flew across my front field and over the house a week or so back. It was lovely to see him/her.

You found a great bonanza of critters in the snow.

I love thinking about you following those mouse tracks -- you are a wildlife detective. I'd almost (only almost) be willing to live in your snow just to know I had several kinds of owls in my backyard. Amazing.

Hari OM
What an adventure wonderland you have at your back door!!! YAM xx

Hi Jennifer, I always enjoy the snow through the photos and your snows photos are very beautiful. I have never experienced snow because we do not have snow here. The mouse, owl and deer are so cute including the birds too. I am so sorry and sad about the deaths because of the storm.

Such wonderful discoveries in the snow!

Haven't seen a robin yet. To me they mean spring is almost here. Got rid of my gnat attracting suet balls and put out a seed feeder. No takers yet, but I did get a bird on the deck. Maybe a type of Wren. It kept taking dives in the water along the cliff, then on the deck it ate some of the seed I threw out for him. - Margy

I looove pics of critters in the snow. (I'll have to travel further north to see them in person).

I love seeing the bucks, and most especially the owl.