What does the fox say?

Not much. It's a shadow on the trailcam. They must be in fierce competition for the cats, since they eat mice, as well as other critters. The cats have cleaned up on rodents. While foxes are primarily nocturnal, I have seen a few on the side of the road, using our human transportation system for quick travel.

We found a red-tailed fox on a day trip, before we moved; one who seemed quite familiar with humans. I had forgotten about this little guy!
Uploaded on 27 Mar 2010

This precious little fox stopped by the side of highway #518 as we drove by. It would appear that someone had fed it at some point in time. It lay down, at first, as we approached in the car. We stopped the car in the middle of the lane, it didn't appear too frightened!


The red fox preys primarily on small animals such as voles, mice, lemmings, hares and rabbits. They also like the taste of chicken and have been called chicken thieves by many farmers. The red fox doesn’t just eat meat, though. It also likes to eat plants, fruits and berries. Even when the red fox is not hungry, it will keep hunting and gathering food to store for its next meal.

The trailcam has revealed a regular visitor. Just a shadow, but it's the right height, shape and colour. I should take back this camera, if they have a different brand, such as my old one which broke. It's lousy capturing our wee critters.

The fox seems to cross our side yard every few days or so. This is for the record! In a complex ecosystem like ours, both predators and prey have to be predictably unpredictable.


Two weeks ago, 7:28 a.m. on Nov. 15th I captured a brief video!
This is in the backyard.
Backyard fox from Jennifer Jilks on Vimeo.

Kiwi Gardens, a nursery northwest of Perth, has had a fox in their greenhouse. They have a video on their Facebook page! They feature Art in the Garden, Father's day weekend every year. These are two screen captures from their video. 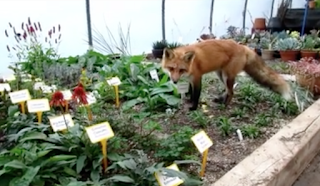 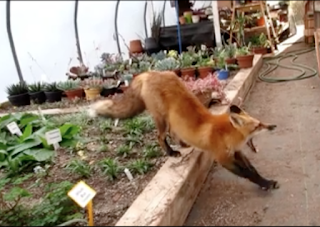 There is something that I find very appealing about a fox.

Foxes are around us far more than we think. We don't see them but they are there. They have now become scavengers and do well in urban areas.

The Parry Sound fox was indeed adorable. Thanks for sharing that moment. I'm always a bit nervous when I see a wild animal too trusting though since not all humans are fox friendly.

I wonder what a fox going into a greenhouse makes of it all.

The first fox looks like it was in good shape.