Having had to clean up our respective parents' homes, hubby and I have been working on our stuff ourselves. My late mother had some photos. I showed them to my daughter, who would be our executor, and explained who they were, at least the ones I knew.

Some I can place, but not others.
Aunt Lill died at her cottage, on Long Lake.
Uncle Fred had a heart issue and fell off of our deck porch, dying shortly thereafter.

My mom died inside our Bala lakefront home, just as she wished.

The three siblings had cottages along the Windsor Dr. lakefront, bought in the 60s.

I did some internet research and found a death certificate for Marion.
Aunt Marion died in Toronto in 1926, according to the death record, of 'creeping paralysis.' I imagine polio.

My father had a class photo in mom's files, as well.

What do we do with these archival photos?

My grandmother told stories about First nations people rescuing her or her brothers, when they'd get lost in the forest nearby. This is a story I wrote down, after having it told to me by my late grandmother. I interviewed her for a high school essay!

This was originally an essay written in early 1976. I tried to trace the family’s development from about 1800 through to the late 1900’s., where Nanny ended up in Port Hope.

Mariah, widowed, ran a boarding house and catering firm in Port Hope. I haven't been able to figure out where.

I did find some lodgers in the Census.

When Nanny was 12, Mariah stopped catering and began to run a boarding house. Anne, when she quit school, helped her mother on a full-time basis. They had a large house, with 19 boarders, to whom they fed breakfast and dinner. Mariah gave them full-course meals, including juice and soup. They also packed a lunch for them.
Every day Annie would clean the rooms. She would sprinkle tea leaves on the carpets and then sweep them up into a dustpan. Linen was always used for the meals, plus there was bedding, so there was a great deal of washing, done by scrubbing. At that time, they were living on about $20 per week after doing all that cooking and cleaning for nineteen people.
One boarder moved into the house in Port Hope. He came from Surrey, England, where his grandfather was the Mayor of Winchester. He had begun his apprenticeship to be a butcher at age 10, and was now going to be a butcher in Port Hope. When nanny was 20, she married this man. His name was Fred Butt, and they moved to Toronto. They opened up a meat and grocery store. Nanny did her share in the store, carrying 150 pounds of meat upstairs from the freezer. 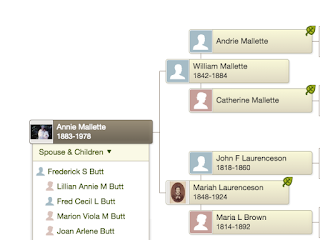 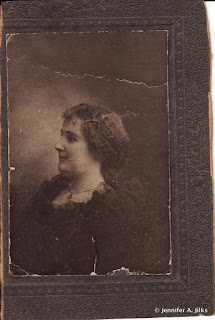 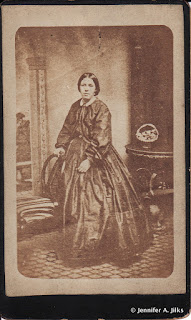 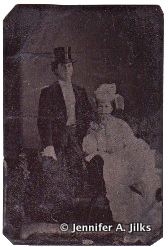 As is the way, I'm not sure who is whom!


We were tootling along, near Ashton and found this photography museum. I donated the large tin-type of my great-grandmother, as well as the other smaller photos. The large tin-types are rare! 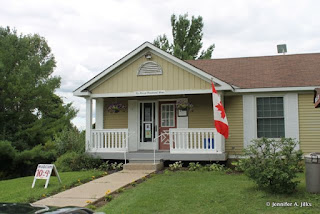 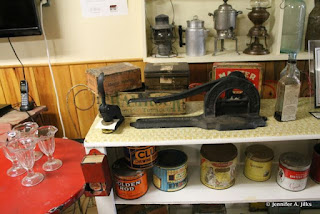 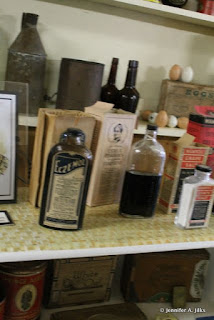 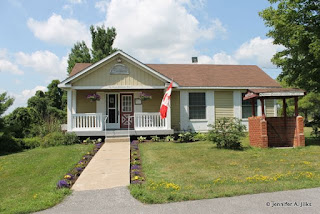 How generous of you to donate the tintype! I enjoy looking at old photos even though I'm not related to the people as it gives us a glimpse of life way back when.

Thank you again for your wonderful donations and for providing such a rich history to go alongside them! They're already hanging in the Museum. Also, I hope you don't mind that I shared your blog post on our facebook page :) https://www.facebook.com/northlanarkregionalmuseum

This is so heart-warming to read your comment, Mellissa. I have old photos too, and Jennifer, your sorting and identifying spurs me on. I have started with some kitchen items, large platters, and next are a dinner set from Scotland, maybe from about the late 1800's. I think our elder daughter so likes this one, fine, very fine china. So I must get a photo on my blog while it is still here. Hugs to you both.

Hari OM
to be able to find a place for your families part in the social history of the region is wonderful - and gives a greater posterity. Lovely post! YAM xx

A tremendous amount of family history, Jennifer! Thanks for sharing it.

We have the same issues. Our kids have only a foggy idea of our backgrounds. It will be absolutely nothing for the grand kids. Family history is important to me. I'm sad that it won't be passed on. I gave all my school yearbooks to the archives a few weeks ago.