It is August, and lots of critters!

The good news: Monarch caterpillar in the vegetable garden is still there and has tripled in size.
Now, most people grow veggies in a veggie garden. I do have rhubarb and 3rd year asparagus, but mostly daisies and twitch grass, as well as several carefully watched Milkweed plants.


The next good news: Geraldine has appeared again. I guess her nights of getting lucky are over. There
are three males in the frog pond, down beside the meadow, but she gets fed up with them and comes back up here to the goldfish pond mid-summer. There is still water down below, but the males tend to be aggressive, so they say.

I'll have to grab her and measure her again. She sits in the middle of the plant pot. Last year she was huge, and doesn't seem to have gone on any sort of a nutritional plan! At this size they eat anything that moves. Last year, I spotted her gobble up a wee leopard frog.

Things are growing everywhere.
Daisy and Dorah came with me to check on the status of the Monarch caterpillar down in the meadow, but we saw no sign of it. We did see lots of other critters. Including tree frogs on the milkweed! There were two tiny ones. 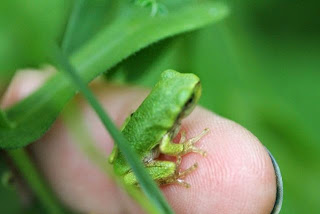 Back up in the front and back gardens: bugs and blooms...

Then, up on the back deck, I lifted the chair pad to sit down. You really have to watch them. The gray tree frogs (yes they turn colour to green, too) get into the BBQ, as well. This was a tree frog who showed no interest in eating my wasps. 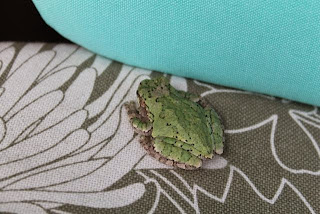 All day it sat on this chair. I moved it twice! 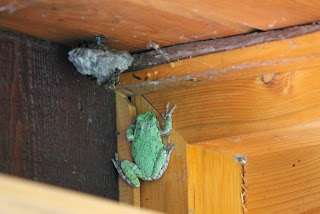 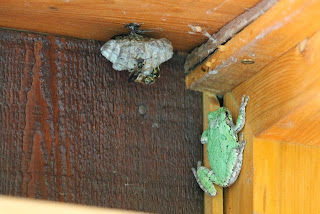 I had to smile, checking the chair before sitting down, and the caterpillar, huge growth in a few days, soon ready to curl up into its chrysalis, I remember waiting as the transparent black finally opened, and beauty in those orange wings appeared. Cheers,Jean.

I just love your little frogs. What a tiny cutie sitting on the end of your finger! No doubt you get entertained by a froggy chorus at night -- one of my favourite sounds! I don't have a lot of frogs close to the house but lots of toads -- also very cute! You live in a little Eden! Thank you for sharing!

There's certainly a healthy frog population in your area.

You've got a whole crowd in your yard!

cute frogs and great to see the caterpillar growing so well

That's quite a climbing frog. We have bullfrog tadpole around the cabin now. Some are growing pretty good sized legs. - Margy