Butterflies and caterpillars as punctuation marks

The delights of a garden in summer. Our Hops
bine is full of critters, mostly aphids, but grasshoppers, ants, tree frogs, and lots of caterpillars, as I have written. I began watching it and learned some more from Butterflies and Moths of North America (BAMONA).
My friendly BAMONA regional expert explained an instar for me. They basically grow out of their skin 5 times until they are ready to cocoon and metapmorphosis occurs.


From my BAMONA expert, Ross:


An instar is what we call each of the five stages that a caterpillar goes through before it becomes a pupa. The first instar comes from the egg, it changes its skin to become the second, then the third, the fourth and the finally the fifth instar, Then it hangs up, head down, often in a J-shape, and the skin splits again to reveal the pupa or chrysalis inside. Then, after about ten days, the pupal skin splits and the butterfly emerges. Your photo looks like at least a fourth instar, or more likely a fifth. So it is almost ready to become a pupa.  Try it. It is fun to watch a butterfly emerge.

I've been watching the instar of this Eastern comma caterpillar, having grabbed a few macro shots. I love their little heads! 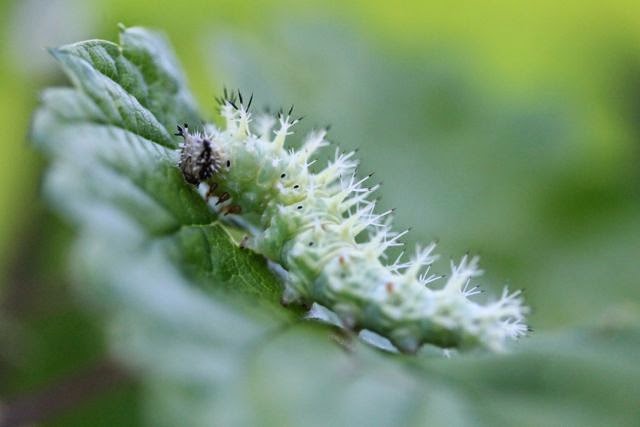 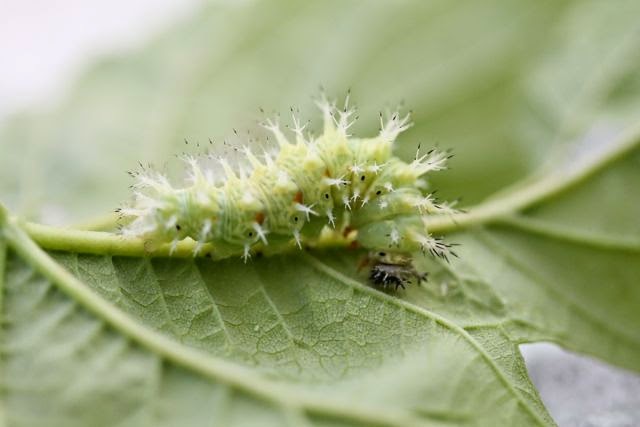 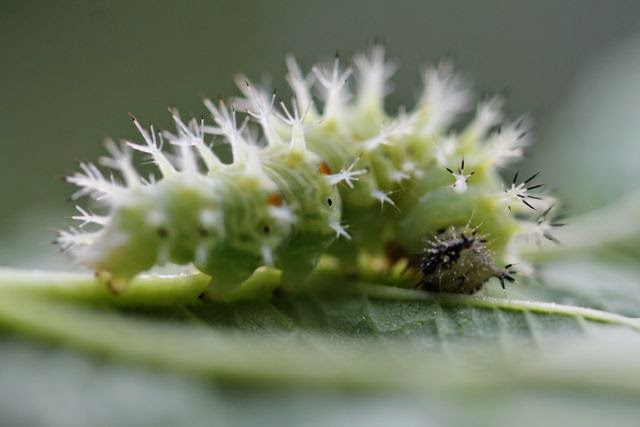 Watch as it twists and twitches!


Eastern Comma Instar from Jennifer Jilks on Vimeo.
Eastern Comma (Polygonia comma) I spotted on the rafter last night at 8:30. This morning its backward J shape relaxed and I knew something was up. I set the videocam, and sped up 13.4 minutes of film 4x.

What is the difference between the Comma and the Question Mark? <= This website was helpful!

I wasn't sure I could differentiate between Eastern Comma (Polygonia comma) and Question Mark (Polygonia interrogationis). What is striking is how different they are with the wings top and bottom.
However, the Eastern comma has a row of 3 dots across the forewing. The Question Mark has a row of 4 dots. What this has to do with punctuation you have to see them at rest, with wings folded. 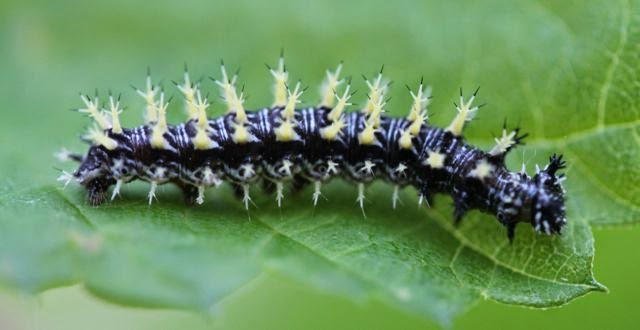 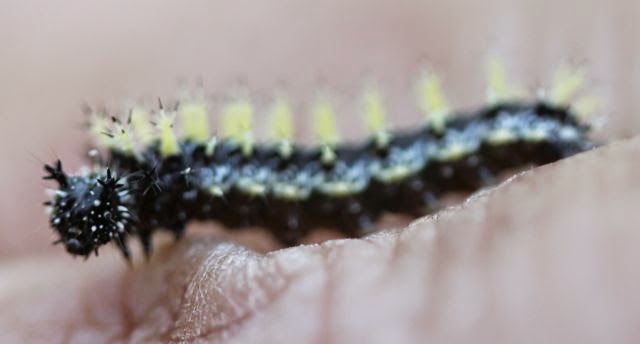 This is a mystery caterpillar, so far. I've put it into a fish tank, with foliage, and hope to find out what it is! They say only two species feed on my Hops Bine, but last year I had an IO caterpillar, and this year, another caterpillar.

I hope you're not going to give me a test on all these beautiful critters!

You have some very unusual caterpillars!