That was quite the event. Well-organised, lots of excellent signage, many volunteers, as well as a ton of tourists visiting this old town. Established in 1816, by demobilized Scottish officers, there is a long tradition of embracing everything Scottish.

The 2010 Perth Kilt Run managed to earn a World Record, with 1089 runners in kilts. They are wonderful to watch, with the various kilt designs. You can read more here, but they await 2012 Record status. In three years, this run has raised over $55,000 to donate to MS.

We needed a bit of a diversion, and off we went. I filmed the end of the race two years ago, I decided to capture photos of the start! First, though, we visited the Crystal Palace to see the preparations.

Back in to town, there were thousands of people there! Unlike things like the bike tours, people make their way to Perth, stop, eat, visit, shop, and spend money here. Some are here to cheer on family or friends. Others, like us, just to see the beautiful colours, and fun people. I will let the photos speak for themselves! 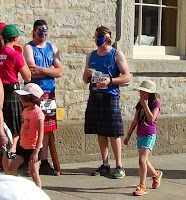 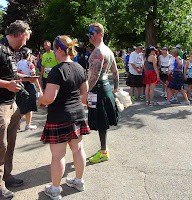 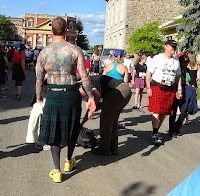 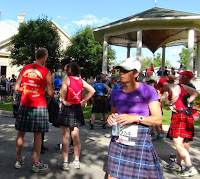 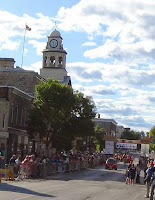 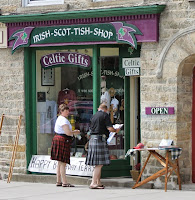 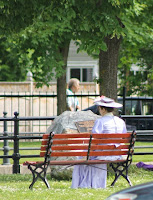 The Running Goat, in Perth, is the big organiser. The little ones ran in the afternoon! You could see the serious runners, screaming past the people having fun, serious about their times. The photographers had to beat it to high ground, as they were deadly serious!

They post the times of the runners. Electronics make it all possible. At the start, the runners just kept coming and coming! They show times for 2121 runners in the 8km race. I used to jog, for exercise. I sure wish I still could, but my knees are too bad!

We chatted with this couple: both from Ottawa. Alex and Leslie.

They did quite well, Alex was #960. He's an experienced racer.
Leslie was full of energy. She came in #391.
The twit, Alex first joked and said this was their honeymoon. (They're just dating!) Alex is planning a triathlon with his daughter this month!
Lots of fun people, as I said! War paint, and weapons, tattoos, all in good fun.
Oh, yes. And I managed another photo bomb just outside the Crystal Palace! A couple, she pregnant, there for the festivities!
Posted by Jenn Jilks at 08:01

Hari Om
Catching up on your batch of posts and as entertained as ever...this one in particular is of course close to my heart!!! The skirl o' the pipes digs deep into the bones &*> YAM xx

Sure enough, war paint on the faces! Terrific shots!

Close to my heart too, my Mum was born in Lanarkshire, her Mum's tartan was the McPherson one,I love the swirling as they run past. Did you know that in one kilt, there can be up to 9 yards of fabric, and there are 3 different weights? A friend of mine, his family was originally from the Isle of Tiree in the Inner Hebrides, he had a kilt made, and I was amazed at how heavy it was, This is a super event. Cheers, Jean. p.s. did I say a wonderful photo story too.

That's a very colorful festival. Even some of the spectators are colorful.

Great to see everyone out and about! Hope it cheered you up some.