I'd not heard of this before.

We took a trip to Cardinal. Then kept on driving. 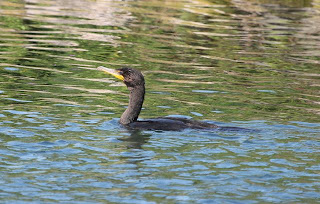 They put in the canal along the St. Laurence Seaway, and had to flood about 10 villages for the hydro dam.
The historical society has a terrific website. 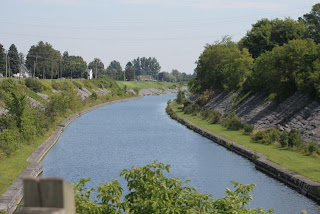 Section 3 writes of the people living in these villages who created a living by serving those who passed through. Eventually, they built mills, harnessing the water in the Long Sault.

This ended when the seaway was installed, but people in the declining villages could see what was coming.
Change is always difficult. Each home owner had to negotiate the purchase of their house.

There are several buildings representing the past and the period of the time. Lots of artifacts, too. It's a delightful spot if you are passing through, with a place to picnic.

is located in Ault Park on Fran Laflamme Drive, 3km east of Long Sault, Ontario. The museum site consists of ten heritage buildings, moved and restored to Ault Park from The Lost Villages and surrounding townships by the members of The Lost Villages Historical Society. Both the interiors and exteriors of the buildings have been restored, and they have been assembled in a village-like setting at Ault Park. The buildings commemorate the inundation of lands, to the south of the museum complex, on July 1, 1958.
They began negotiations with the US government, finished in 1932, but the Senate in the US did not ratify.  They tried again in 1941, but didn't accomplish anything until after the war.
The Seaway project had two purposes. Primarily it was to provide Eastern Ontario and Upstate New York with much low-cost hydroelectric power. Secondly, replacing the antiquated 110 year-old Cornwall Canal, with a system that could handle the larger ocean-going shipping vessels, was needed to provide greater access to the inland ports on the Great Lakes.

It was a long, complicated process to make the seaway navigable. The first canals opened in 1783. The Cornwall Canal was begun in 1834 and went inland to Dickinson's Landing, taking boats up to 186' long. They finished it in 1842.
They made it up to Lake Superior, through shallow canals in the Welland Canal in 1900. Eventually this part of the project was finished in 1958. 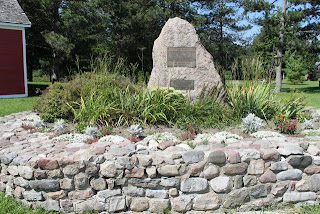 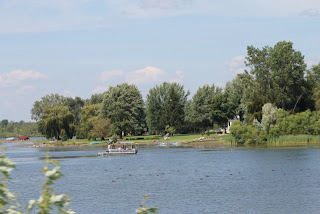 Reminds me of the Elan Valley which was flooded behind a dam, A church was covered in water so they built a new one above on the side of the Reservoir, it's one of the few I have visited with no electricity.

I kept reading this, and all the dates were so distant, I was beginning to wonder if I had imagined hearing about the completion of the Seaway. But 1958...yes, I do remember!
Whew! My memory is pretty bad, but I had that right.
So glad the lost towns have a place to shine, even today. I remember when a huge hydroelectric dam was built in BC in the 1960s, causing some uproar and many tears.
K

Cool!!! They have a display about building the Seaway at Upper Canada Village, too, but I thought that was the only one! I always have to wander among the old gravestones that were rescued from the flooding...

The canal was a huge project with a fair bit of controversy. The villages were certainly part of the controversy.

Hari OM
Oh this is so wonderful and I love how you help us to explore with you! The bridge reminds me of the Forth Road Bridge in Scotland.

Whenever there is "progress" there are victims.