A new look for Frosty and new pieces of artwork!

I love decorating my property. Creating art from found, scrounged repurposed materials, or inexpensive items. Frosty is a piece my late Mom and Dad had, and rather than bringing him in after winter, I've been decorating him for the seasons!

At Easter he had rabbit ears, but in August, I decided to turn him into a fishergirl!
A trip to the Sally Ann, and an Ottawa Freecycle set of beads for a fishing line, a craft foam fish with eyes, and we're all set!

Bear is sporting a jaunty Canada Day/Olympic/Calgary Stampede hat, as well as a Canada Day tie.

My latest project was to figure out something for the window frame. We had to have our front windows replaced, and they were going to the dump. Instead, after the glass broke, I figured out what to do!

Carefully measuring 1" all around, I tapped in nails and wound some multi-coloured yarn from one point to the opposite corner, then moving one nail over and doing the same. What's cool about the yarn is that there are spots of intense colour.

Hubby found some unique spiders, made from beads, with posable limbs. I popped those on, as well as a chipmunk tail from one of Oliver's catches.


I used to do this type of pattern with my students for geometry projects. We made them from cardboard. Eventually, school supply companies made them from hard plastic and we would use elastics, but we loved the patterns.

I loved teaching art. Our Language Arts was based on a theme, and so was our art. It was more that I facilitated art; gathering materials, and seeing what they could create. I loathed it when everyone's art all looked the same. My bright artists would figure something out, tutor the others, and we would have a grand time. 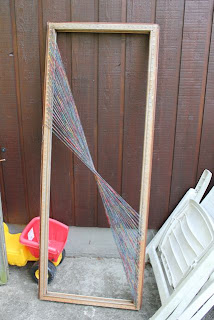 Here is before, well 'during' when I ran out of yarn, and after!
I began with a small skein of wool yarn, bought on sale, and realized I wouldn't have enough. Back to the store!
How to make a skirt using ties.
Bear has been fun. But even bear has had a change.

You have some lovely pieces of garden art. I don't think a garden is complete unless it has some interesting art pieces in it. I love what you did with the window frame.

Such fun stuff! I love your repurposed window frame! What a great idea! And you wonder why people want to stop and look at your yard...I would want to stop too!

Craft girl! You are multi-talented.

Now I get why you set up the decorations at your house...an art teacher! I am not artistic and it's one thing I think I really missed.

I don't mind them looking at my art, Linda. But when they drive up my 100m driveway and turn around in front of my garage, not saying hello, it creeps me out!