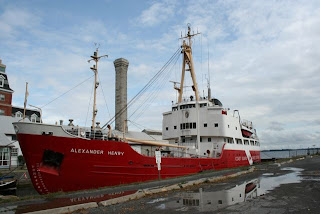 There are warnings that our Provincial Parks are facing huge cuts this September. This is the same for Canada Parks. What a shame.

This seems a bit, well, strange...
We cut back in tourism, as we cut jobs, and risk our World Heritage status for our canal, but Canada Parks is paying for a $250,000 trip to try and find the so-called Franklin Museum trip ships. You see, we've declared them historic monuments, but we don't know where they are!

The interesting thing is that CBC is covering the event, with blogging journalists (David Common: Visit to the ship's nurse, seriously?), and on-line footage, using more tax dollars, for this hopeful discovery of these lost Franklin Museum ships. Now,  I understand that if we declare them heritage sites, they are protected. But shouldn't we find them first? 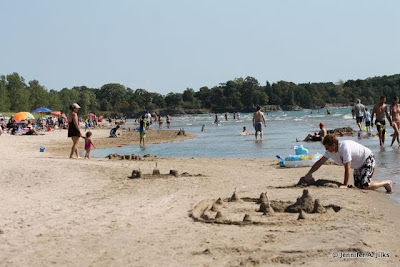 I would think that it better to put money into the sites we have, and the tourist attractions we need to promote, rather than dumping money into this. Surely, they could find private funding for this, by some philanthropist?

Lady Franklin led the charge, trying to get the Brits to search for them. In those days Canada was still British North America. There have since been 17 searches between 1984 and 2011.

Now, set these men in a new ship with new technology, untested in Arctic conditions, where they truly didn't know how to survive. Arrogant thinking they could, when the Inuit had been there for 8000 years! Not only that, but they ignored the Inuit stories!
“The tales which are preserved [by the Inuit] often contain compelling details without which a complete picture cannot be built,” Woodman says. “But, for 100 years, the main stumbling block is that no one paid attention to the Inuit stories.”
We visited Sandbanks Provincial Park. Great fun, with an amazing beach. Above is my photo collection of the day. Ontario has many such parks, with amazing beaches, as does Canada Parks.

Our local park, Murphys Point, has a great beach, too. Why don't we focus on our parks, not ships lost 100 years ago?

EXCLUSIVE: CBC News is on board as Parks Canada launches the biggest expedition yet to find the missing ships from Sir John Franklin's doomed 1845 effort to discover the Northwest Passage.
While Sir John Franklin's 1845 expedition left England amid much optimism, it ultimately ended in the tragedy and became the greatest disaster in British exploration of the Arctic.
Posted by Jenn Jilks at 08:34

Sometimes there is simply no understanding governments!

I agree, the parks should come first. I feel that way about ours. We have had great enjoyment out of them. It's a place to get away from all that crush that we feel in the cities.

I couldn't view your Sandbanks photos, said page not found. It is a wonderful beach but I prefer the quieter ones like at Wellington.

Thanks, Crafty, I hope I fixed the link!

I've been interested in the Franklin expedition since grade three. It's mystery that has always attracted me. I'm not sure what would happen if they ever found the ships. I'm with you . there's much better to spend our money on. heritage status just means if somebody does find them they cannot be exploited.

I too find that strange the priority being on finding lost ships and not our wonderful parks. Is there anything published on this to read Jenn?

Jenn dear, if you ever manage to figure out what compels the present federal government to spend our tax money foolishly, please let me know.
No matter how interested I might be in the answer to "what happened?" I don't think they should be taking money from Parks Canada in order to not find out, just as everyone else has not found out.
K