How to build a pond 1b 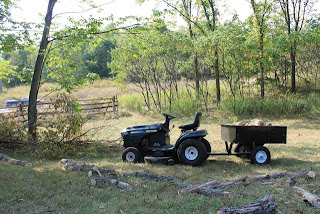 I had a delay, as we had some trees taken down.
We hired a neighbour and his assistant, to do the work. 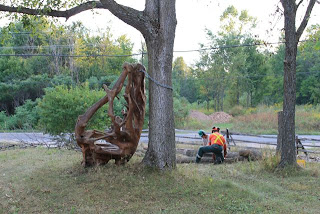 I've been stacking wood for three days. Finally done. Had to visit a hospice client Saturday, did an hour before this in the a.m. and a couple of hours of stakcing in the afternoon.

The lawn tractor is magic. I loaded up the wood, and took it behind the house. So quick. The sticks and branches I chucked onto the field where the deer chew up our new sumac, hoping this will dissuade them.

I was inspired with this little pond in Rideau Ferry.
Quite a few frogs.

I'm still at it, with my pond. NO help today. Kittens were a hindrance, diving into the hole with the rocks. 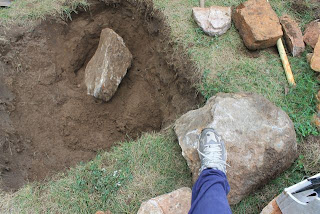 JB called them, and gave them some food to get them out of my hair.

I managed to wrestle this rock out. It seems to be the smaller half of the one in the hole.

I tipped it over onto the dolly, and sort of slid it upwards. It worked. Took me some time.
I don't mind hard work.
I had Lake 88.1 on the solar-powered radio, which worked until the rains came and the clouds meant i had to crank the sucker every once-in-a-while.


I think I might have to hire a neighbour and his backhoe. It is satisfying work, digging, but fruitless now, until rock #2 is removed. 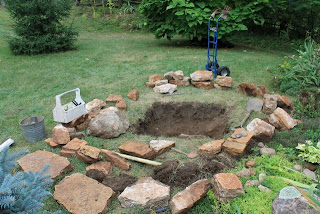 I've bought a liner, 2nd hand, from a garage sale. Funnily enough, we listed our old frige on freecycle, and one of the guys helping the man pick it up mentioned his sale. I bought it. There is also a pump. The liner is huge, 9' x 16'. But I plan on making the pond 3' deep in the middle. With enough greenery I won't need any thing else. Shirley is having a grand time in her half barrel. With a small pump circulating the water, she is GROWING!!!!

Takes me forever to post a comment here because I keep clicking on your other links. Now that I've checked out Shirley, a beaver, and one or two turtles...I can empathize with the pond-building. I've only done it once, and I had a healthy rent-a-kid, but he insisted on making a waterfall as well, so it was a long, slow process. I loved having it, though.
— K

You have been busy, the pond is great to have in your yard. I'm sure you and the critters will enjoy your new pond.

If all those rocks came out of the one hole, how did you ever have any room for dirt in there!??
And just as a teaser, this morning, I almost stepped on a baby snapper, so there will be photos, in a day or two, after I get the photos uploaded...

You've got a nice project going there Jenn. It will all be worth it. We have done so many projects together over the years -- not as much to do now the way we live, but there is still some maintenance stuff and I'm glad we can do much of it ourselves.