After a delightful morning with Dr. Brian Goldman, of CBC's White Coat Black Art, we took him to lunch at Fiddleheads outdoor cafe, by the Tay River. One of our favourite places to sit outdoors and eat, the river runs by, usually quiet, but the tourists and citiots have come to town for the summer. You know which they are by their behaviour.

The gentlemen (hubby and Brian) went indoors for a tour of the old building, Code's Mill. I sat outside. The guys behind me were playing a YouTube video on the guy's PCD.

Speaking of their boat at the cottage, drinking plans for the weekend - boys and their toys- they each ordered another beer.

Now, I loathe people talking loudly on their cell phones. I firmly believe one must teach people how to treat you.

I have pretty good hearing, for a middle-aged woman, and I could hear the video beginning to get crude, talking about whales and balls (testicles). The running commentary was silly, as well - by my two seat mates behind me.


What young people do not know is that people of my generation learned to use computers at work while these guys were in diapers. We are no strangers to hightech. We Skype with grandkids, keep in touch, using Facebook, with friends near and far.

One of my favourite bloggers is *Latane. Latane and I Skyped; me in Muskoka, she in her home in Virginia, with Elbert (1930 - 2011) in the background in their sunroom. It was a delightful moment. 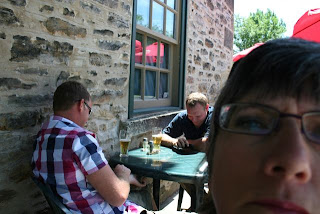 I may not have an iPhone, but I have a Mac, a digital camera and a blog that has attracted more than 103,000 clicks. I've done blogging with students professionally, taught webpage design, I've given IT workshops to peers and Internet Safety lectures to parents, peers, and students.

These crude men bring no added value to this world. Proud of their apparent prowess, they inflict the world with their choice of music and videos.

I asked the gentleman (politely) to turn the sound down, please. The man in the checkered shirt asked what I was drinking, "dry wine?" I ignored him. Next comment, loudly stated (in case I was hard of hearing?) "Prude!" I'm not prude. He was rude.

Perhaps I am prude. I just don't like listened to videos someone else has chosen, with vulgar language, while showing off their tools in public! Is this a male thing?

His buddy said: "I'm sick of old people". The arrogance of the men. Fueled by beer, perhaps they were showing off for each other.

I'm not sick of young people; I loathe some of them and their rudeness.
As is my way, I channeled my anger into writing down what they had said. I was shocked. Which is why I wrote my book, to channel my grief, and distance myself from the reality of the situation for awhile.

And he hasn't seen 'old people'. I am not experienced enough to feel I belong to that honourable category of 'old people'. The knowledge, experience and wisdom of our elders is the treasure they give to society.

The seniors I work with through Hospice; WW II vets who left wives at home to farm while they learned to shine shoes, and march, watch their friends get blown up, and fly airplanes to bomb the enemy. Latane's husband served in Hawaii in WW II, as have many of my hospice clients. Many of our volunteers are veterans, while care recipients are also those who have served.

I think that some young people need to be taught manners and respect for their elders. You can't blame a teacher, as that is the responsibility of their parents. I've taught my share of etiquette and netiquette lessons. [Don't criticize the coffee, you'll be old and weak someday!] Perhaps it is a waste of time and energy, but the teacher in me cannot give up hope. We can all learn to live and love.

* Latane  mother, grandmother, great-grandmother, who documented her late husband's decline 'Our Journey Through Alzheimer's', and his eventual death, due to Alzheimer's disease. Now, in bereavement, she is documenting her recovery from bereavement, after her marriage of 60 years.
Posted by Jenn Jilks at 10:25

Jenn, you just amaze me. I was reading along on your post and there I was.... Wow. It touches me to know that I have touched and connected with someone so sweet and kind as you .... and yes, wasn't skypeing such fun. I don't do that anymore. I had skype to talk to my son and he got disinterested so I quit. Bummer.

"I hate old people"! Does that include their mothers, their aunts, their grandmothers? Or do they think they're funny?
It's sad, but they are "too much with us, late and soon" and will probably never disappear. Idiots, I mean. So you're right not to let them spoil what otherwise sounds like a good day.
You're right about old people. I'm now the eldest in my immediate family, because both of my parents died in the last four years, but I'm not yet the kind of "old people" of whom you speak. There's nothing very venerable about me — yet!
— K

OOoo, that made me mad. I have to admire your restraint because they would have been wearing someone's lunch if I'd been there.

What disgusting people those men are. It's not just men either. I know both genders are sometimes guilty of crassness and boorishness. However, I hope they'll remember their stupid, rude and crude behavior when they are treated the same way in a few years.

I reread the note I wrote on the back of a store receipt. The citiot said, "I'm sick of old people!" @Kay. Same difference, I suppose.

We elders carry on the family traditions, the stories, the values. I feel sorry for these young men's families, that they must deal with them.

@Latane, Me? You amaze me. You are my hero.
You do all you do with dignity and grace. Keep the faith, keep touching us all.

You're right @Olga. I was tempted to dump his crackberry in my husband's water glass!

I love your point, Kay, I'd love to talk to him in long-term care. We love our clients so much.

The crudeness you are talking about bothers me also. And then the comments about old people and such. I'm no prude but some things shouldn't be broadcasted to an unwilling audience.

Our son has a friend with an iphone who has had no limits placed on him by his mother on the youtube videos. He was shocked when we first told him that if he wanted to stay during a visit he was going to have to put up and keep stashed his iphone. He liked to play crude videos on it that we didn't think our son should hear or was ready to hear.

Basically though, I have a lot of faith in young people. Most of them are very courteous.

I think too many people on vacation away from home think they are anonymous so are tempted to do and say things they might not do in their own neighbourhoold. Might not. Just remember that what goes around comes around. :) One day years from now young people will likely treat them in a similar way. And probably they will be shocked and "remember" how well mannered they were when they were young.