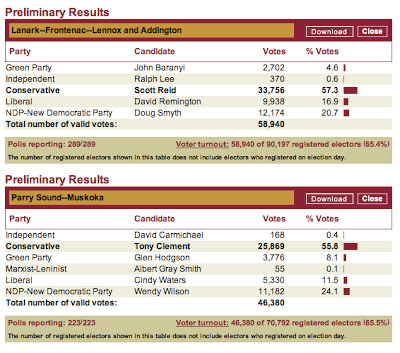 The secret tweets have stopped. Although some were redacted! (One cannot tell the west coast how the east coast did, before the polls close. According to ancient legislation!)
We have some new Members of Parliament.

Not, as yet, appointed.

The Prime Minister Stephen Harper (PM) went off to the Governor General to ask to form the government today. He said, yes. (Surprise!) I remember how ticked we all were when he asked them to prorogue parliament. Now he is happy. A majority. I was explaining all this to a young friend. How he has the majority of seats. Any MP can table a bill within the guidelines, but most will vote according to the party leader's direction. It will be smooth sailing for a year. Maybe.

The PM now has to create a cabinet, with various members responsible for portfolios: foreign affairs, health, justice, treasury board, etc.

They all have assigned seats. How do they determine that? Hubby set off to his computer after dishes. It took a bit of digging!

We discussed this at dinner. Two choices: protocol and precedence, or some law somewhere handed down from the great kings and queens of England. In fact, they sit opposite one another, with the seats being three sword lengths apart. They sit on cushy chairs, with translation apparatus, quite cushy. In England they have benches. To discourage long speechifying?!

The governing party sits to the right of the Speaker. You can see the lovely throne and the gallery above in the photo.

The party whip assigns seats, mostly based on protocol. The Prime Minister sits either in the 11th or 13th seat from the Speaker. (This was confusing and had both versions!)

His Cabinet is on either side of the PM. Front row for all.

The rest are placed according to seniority.
Then it is alphabetical, if they were elected in the same year. The newbies are in the back rows! Remember, we have these MPs on TV, and all must be placed to look their best!

However, it is like the Grammys. When MPs are away, they like to fill the seats. You'll notice that there are several women and minorities in the camera view behind the PM! The famous, 'dress in ethnic clothes' party demand.

Now, you might ask, what happens with the NDP? They are the Official Opposition.

The Opposition Leader (Jack Layton) sits directly opposite the Prime Minister. This helps when they are generally doing their ranting and supplementary questions.

The Opposition Leader's shadow cabinet sits on either side. Shadow Cabinet is an alternative cabinet to the government who shadows and provides critical opposition on policy matters to the government's position, e.g., foreign affairs, energy, health, finances, small business.

Here is the Green Party's list. This list will likely not change, which is why I place it here. In the government's case, and the official opposition, there are many who have either lost or gained seats in parliament, and changes are in the offing for both the CPC and the NDP!
Posted by Jenn Jilks at 06:37

My sister lives in Elizabeth May's riding and cannot be happier about the results. Here's hoping May continues with her strong voice in Parliament!!

Congratulations on getting such good turnout for the elections. Voter apathy is such a problem over here.

The election results sure stunned me! I'm very happy for Elizabeth May.