Perth was a busy place this w/e 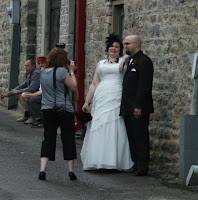 We came back to town after the big birthday, first for my 2nd granddaughter.

Behind Code's Mill, we spotted a wedding. What fun!

The big excitement was to go to a Liona Boyd concert. Held in a local church, it was a lovely, intimate venue. Much less expensive than concerts in town, it was an ideal location; a church with great acoustics.

It was quite irritating, in this lovely church, to see people popping up and down. One of the women in her crew kept taking photos, with a flash. The distraction was enormous in the darkend theatre. The press was present, Perth Courier journalist eschewed the flash, but the light from his digital display really was disconcerting, especially when he got up, moved rows for a better image. Then he took out his iPhone, I suppose to upload a tweet: look where I am! As an old codger, I remember when people could sit still for the time it took for a concert. I remember when a flash wasn't allowed. Then he left, part way through the first half of the show, perhaps to go write his story. It seemed rude to me. /my two cents worth. 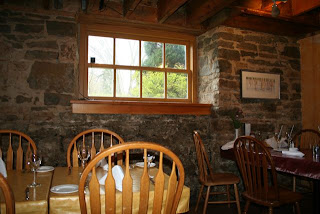 The EMC paper had written a lovely story, and the show's producer thanked him. I heard Chris tell a friend (he was sitting behind me) that Ms. Boyd was the best interview ever, and the nicest person! More was written about the promoter than the artist. Yet, great advertising for the duet.


Liona Boyd released two records in 2009:
Liona Boyd Sings Songs of Love, seventeen duets with Srdjan Givoje, was released in September.
This is who appeared with her in Perth. A talented Croation, he accompanies her well. He is accomplished, a star in his former native Croatia, he now lives in the US. They met at a conference and decided to pair up. His delightful accent added to the flavour of the concert. 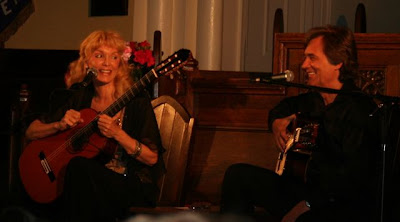 He is married, and it is a business relationship, one with laughter and a joy! They share a love of music. They played a Croation song, with lyrics rewritten by Ms. Boyd. This song gave us a glimmer into his background. His sense of humour adds a spark to the quite reserved lady of the guitar.
Unused to being a duet, I imagine, having played across the world with orchestras, she seemed nervous and very tight. Part way through the concert Ms. Boyd told us that her father died last week. What a shock. No wonder. Since she loves her guitar so much, I can see that this would be good therapy for her.
Now, she has had some neurological issues, and lost the ability to use her right hand at the level for which she is famou. Such a shame. She divorced her  husband, who was convinced she should quit guitar, and reinvented herself. She is now writing music, and singing much lighter fair, e.g., Liona Body Sings Songs of Love. The video, with a hunky younger actor, seems a bit misplaced. She assured Sunday's audience that she has no man in her life now!
She is a beautiful 61, but 61 years nonetheless. Her songs, lots of love songs; and Guantanamera, Puff the Magic Dragon, were fun, and most of us sang along. Even playing a modified guitar style: with less demanding arrangements, her artistry was evident.

What was incongruous, was her ability to play even a modified guitar style, a light touch, world-level abilities, with the light, airy love songs form her new album.

Unfortunately, during the duets, when she held the descant, his microphone wasn't loud enough. The descant should not overpower the melody, now matter how famous you are! His voice isn't bad, but his guitar technique is fabulous, if under utilised. I would think his talents would warrant a couple of solos.

Ms. Boyd's voice is untrained and breathy. Her chest voice is nonexistent for the lower notes in her range. This can be fixed. A series of vocal lessons, even at age 61, would help her. Her phrasing reflects the style of an amateur and could surely be improved with some education. Most pros spend years taking voice lessons, or, at least stretching their voice muscles and vocal chords. And one never, ever, takes a breath in the middle of a word. Her guitar work, even with her disability, doesn't match her vocal technique. It is quite jarring. Many were quite thrilled, I guess her reputation is enough, lining up getting autographs.

Ms. Boyd has begun writing songs. Taking several old tunes, Greensleeves, for example, and putting new words. This is a tune that is overdone, and I would have preferred a new tune.

She had a bit of a brain fade, and had to restart the tune several times until she found herself. The tune, a very old one, has had a number of interpretations. In this quite casual venue, it was endearing, overall, but frightening. This woman who has given private concerts for popes and queens. She has great courage.

I was disappointed with the lyrics of her songs. They were simple, colourless songs. Fully of love, but there was no rainbow of colour. I expect, when someone of her calibre and background writes lyrics, she would use a variety of poetic tools; simile, metaphor, and the like, but they are quite absent in these simple love songs.

One song, about her guitar, seems to show how much more she loves that instrument, than the people in her life. The songs are generic, and lack the experience and love of particular human beings. I hope she finds her voice, and her purpose in life. Her gift, as a classical guitarist, are layered. I have reinvented myself as a volunteer, having lost my ability to work while caring for aging parents. I can understand how difficult it is leaving your old work behind, and creating a new purpose in life. You would think that the world-class musicians in her life would have counselled her to honing her new craft: song writing and her voice, before appearing publicly.

That said, it was a delightful concert overall. For a woman with an incredible life, dating Pierre Trudeau, travelling the world with her guitar, it was good to see her smiling, playing, and finding herself. Interestingly, Shania Twain, also a Canadian, lost her voice a number of years ago, and she, too is reinventing herself as an artist. Many face workplace and careers medical issues. Sports stars are facing concussions, for example, and having to find new careers. With all of us living longer, more productive lives, this is something many of us face. I, too, quit teaching having burned out caring for family members. It is all in how we face our life lessons that makes a difference.

Liona Boyd announced a move back to Toronto, Canada. This is a good thing. I would hope she could teach, and share her knowledge with young people. I took classical guitar back in the 70s, and it is a skill that many can only aspire to. Best of luck to her.
Posted by Jenn Jilks at 11:12

I've always liked Leona Boyd's music. You've really gone into great detail about the concett and her present situation regarding her career. Thanks.

I enjoyed reading your take on the day.

I arrived just as the concert started and sat in the front row so was not bothered by cameras. And I was too transfixed to notice the flashes.

Chris did two articles, one on Liona and the other on the promoter. Both well written and intriguing.

I like Liona's singing, playing, lyrics and performing partner, Srdjan Givoje, just the way they are. Reminds me of the sixties and early seventies singing with a pretty gal, a nice guy, understandable songs and well-played guitars. Innocence and truth.

There are many overbaked professionally trained performers these days who have lost the soul of their music stretching beyond what they are - I don't care for that. I like Liona just the way she is.

And they were so gracious to stay around afterwards for autographs, photos and chats with fans.

@anonymous As someone who has sung in choirs since she was 13 years old, sung on the NAC stage with the Ottawa Choral Society, I expected a bit more of a vocal technique. I also expected more of those in attendance; to honour her spirit. Disrespect for the audience, in the vein of 'doing their job' is just a slap in the face of those who paid money to watch the show.

I never thought of sitting in the front. Good idea. We had to move twice, as tall people were sitting in front of us as it was, even with the design of the church.